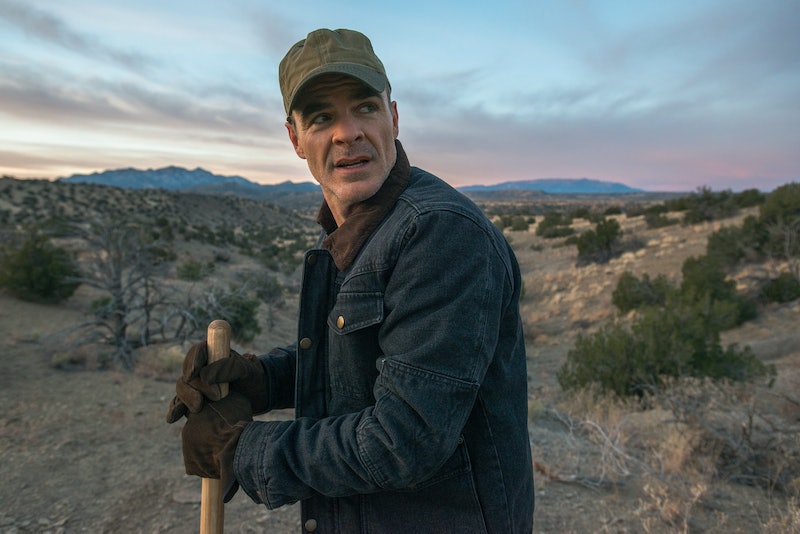 I'm gonna go ahead and warn you right now: If for some reason you haven't yet watched the entirety of House Of Cards Season 3 — and you intend to at some point — then turn away now, since we'll be discussing some extremely spoilery stuff here. OK, we're all on the same page? Good. Then let's talk about the controversial end to Doug's Season 3 journey; namely Doug's decision to kill Rachel Posner in cold blood. But is it possible that Doug didn't really kill Rachel?

Let's take a look back, for starters: The third season premiere of Netflix's political drama shocked viewers by revealing that Doug Stamper, President Underwood's Chief of Staff, was alive and, if not well, then at least on the road to recovery, after having seemingly perished at the end of Season 2. Rachel had hit the man in the head with a rock when she thought he was going to kill her, and left him for dead in the woods. In the Season 3 finale, the tables were turned when Doug finally caught up to Rachel after 13 episodes of searching for the missing woman, drove her into the desert, killed her, and buried her unceremoniously in a shallow grave.

To say that this plot twist was controversial is an understatement. Some viewers enjoyed Doug's storyline, including Vulture's Matt Zoller Seitz, who lauded the show for "subvert[ing] the typical trauma narrative":

Doug’s story is atypical only because it ends (or pauses) on such a dour note. The pain that he suffered launched him down a rough road. [...] The injury changed Doug in the worst way, burning away whatever remained of this chilly political fixer’s conscience. All he wanted was to get back to where he’d been — a return to a dark Eden lorded over by forked-tongued Frank — and he gets his wish, but the final episode feels like a point of no return for this character.

But just as many — if not more — viewers decried Doug's assassination of Rachel as frustrating, upsetting, or both, including TVLine's Michael Ausiello, who "was not happy about Rachel getting killed off":

I loved that character, and I felt like it added a lot of heart to the show. So it sucked to see her go. But it also frustrated me because I feel like the three biggest threats to Frank’s career — Peter, Zoe and now Rachel — have all been murdered. If someone gets too close to destroying him, Frank just has him/her killed. It feels too easy. And it undermines the suspense, because you assume the next big threat he faces will just be disposed of too.

Regardless of which side of the debate you come down on, the question has to be asked: Did Doug really kill Rachel? Or are the writers just trying to mislead their audience... again? Since House Of Cards was officially renewed for Season 4, we know we'll get a definitive answer one way or another next year. But in the meantime, let's consider the possibilities:

There's always the chance that the writers are trying to execute a big switcheroo. It's not like this would be the first time, either. In Season 3, they tried to make it out like Doug's fate at the end of Season 2 had been ambiguous; but there's nothing ambiguous about the image of a man lying completely immobile with his eyes open, unblinking. If Doug's eyes had been closed? Then, sure. Fate: ambiguous. But they clearly wanted to trick us until thinking he was dead; so who's to say they're not trying to trick us again? Fool me once, shame on you. Fool me twice, shame on me.

Cards creator Beau Willimon even went so far as to admit his trickery in an interview with Entertainment Weekly. When breaking Doug's Season 2 story, he said he and the writers decided Rachel had to kill him... but they liked the character too much to part with him. So they came up with the "ambiguous" cliffhanger instead: "I had a realization, which was we can have our cake and eat it too." Do those sound like the words of a man we can trust?

So how could Doug have not killed Rachel, given what we saw? Keep in mind that we never actually witness the murder; just Doug approaching Rachel in his van, and then a quick cut to him shoveling dirt over a body. But all we glimpsed of the corpse was an ear and long red hair. Maybe it wasn't Rachel at all. Maybe Doug decided that, in order to fully protect Rachel, he needed to kill someone. He could have killed anyone with red hair and put them in the grave in case Frank sent someone else poking around to make sure Doug had finished the job. (Sort of a Huntsman/Snow White situation, except grislier.) Of course, this would still mean that Doug had killed someone, so it's not really better news for the character's moral standing, but at least Rachel would be alive.

But there are other ways Rachel could still be alive other than Doug having let her live. Again, since we didn't actually see him kill her, there's always the chance that she simply didn't die. Since we didn't see the act, there's no way to guarantee that she was actually dead when she went into the ground, short of a flashback of Doug shooting her through the head. Whether he hit her with his car, strangled her, or whacked her with his shovel, it's possible that she survived the attack.

The grave that Doug was digging didn't look that deep; if Rachel did survive, she could have crawled out, found help, and gone back into hiding, ready to bring Frank and Doug down once and for all in Season 4. (Hey, it's probably gonna be the last season.)

The other possibility that would allow for Rachel to have survived a murder attempt would be... if it didn't actually happen at all. This one's admittedly the biggest stretch, but bear with me. Not only is Doug an alcoholic struggling with his addiction (aka having a prostitute squirt shots of whiskey down his throat with a syringe), but he recently suffered severe brain damage. Remember when Rachel hit him in the head several times with a jagged, heavy rock? Yeah. Who knows what kind of long-term damage that might have done to the man's brain.

If we had only seen things from Doug's perspective, it would be easy to argue that everything that happened in New Mexico was a prolonged dream sequence. However, we did see Rachel going about her day from her own perspective, so we have to accept that at least some of it was real. But what if, after he let Rachel go and started to drive away, Doug became so unbalanced by the potent combination of his obsession with Rachel, his loyalty to Frank, and his literal brain damage, that he snapped and imagined himself going back and burying the part of his life that had caused him so much pain?

Then there's the fourth option: Doug really killed Rachel, and she's just dead. Period, end of story. As shocking as Doug's act of violence was, it wasn't exactly unprecedented in the show's history. Rachel's murder was simply the latest in a string of shocking House Of Cards deaths, starting with Peter Russo in Season 1 and continuing with Zoe Barnes in Season 2. The fact that there had been no major characters killed off in Season 3 by the time the finale rolled around should have clued us in that something terrible was about to happen to Rachel.

We may not like the fact that Doug killed Rachel, but it was admittedly the logical conclusion to his Season 3 character arc. As Vulture's Seitz put it, "Traumatized TV characters usually end up learning a lot about themselves and growing in the process. In Doug’s case, the education has been ugly, his growth malignant." But it was growth nonetheless. So one could argue that for Doug to have not killed Rachel would have been backwards momentum and therefore bad storytelling.

This is exactly what Willimon had to say when TVLine's Ausiello confronted him with his feelings of disappointment: "If he had not killed her, then he would be reverting back to where he was in Season 2, where he was not being entirely truthful about Rachel, where he was not getting the job done." So while we may not like the fact that Doug was capable of murdering an innocent woman, I think we need to accept the fact that Rachel is indeed dead... barring a miraculous, have-your-cake-and-eat-it-too resurrection in Season 4.

More like this
The 'Better Call Saul' Creators Said "Never Say Never" To More 'Breaking Bad' Spinoffs
By Brad Witter
Which Cast Member of 'Westworld' Season 4 Has the Highest Net Worth?
By Meg Walters
It’s Official: 'The Bachelorette' Is No Longer A Fairy Tale
By Samantha Allen
Netflix Reveals First Look At Wednesday In The 'Addams Family' Spinoff Series
By Bustle Editors
Get Even More From Bustle — Sign Up For The Newsletter