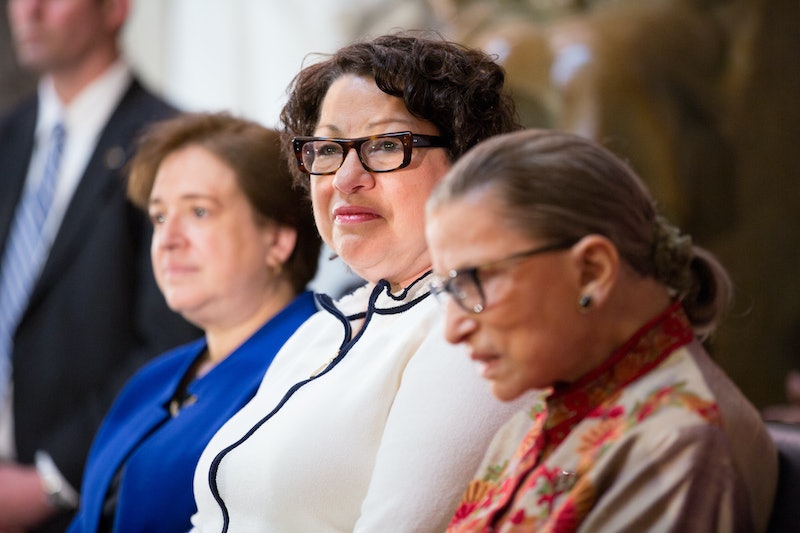 Feminism took over the Supreme Court this week, when nearly 2,000 pro-choice activists traveled to Washington, D.C. and flocked to the steps of the iconic building to rally in support of abortion rights. Inside the Supreme Court chamber, the high court finally saw the power of having women — and not just a woman — on the bench. Justices Sonia Sotomayor, Elena Kagan, and the "Notorious" Ruth Bader Ginsburg took the lead in Whole Woman's Health v. Hellerstedt, the biggest abortion rights case to be heard before the high court in over 20 years. To put it succinctly, all three women of the Supreme Court were not having it. Needless to say, those oral arguments produced some of the best feminist quotes from this week.

Justices Sotomayor, Kagan, and Ginsburg — along with Justice Stephen Breyer — are surely America’s feminist heroes of the week. The three women pounced on Texas Solicitor General Scott Keller and, question by question, dismantled and ridiculed the omnibus abortion law that threatens to close a majority of Texas’ abortion clinics, leaving the Lone Star State with fewer than 10 licensed facilities and women across wide swaths of the state with no access to legal reproductive health care.

Ginsburg, Our Lady of Justice and the patron saint of reproductive rights and #slaying, delivered perhaps the most poignant moment of Wednesday's HB2 oral arguments when she reminded Texas Solicitor General Scott Keller that the lives of women, not the 8-feet-wide hallways of ambulatory surgical centers, were at the heart of this case. Several times during the hearing, Ginsburg raised the point that this case is, truly, about a woman's fundamental right to choose to have an abortion, and that's what is ultimately at stake in this decision. Yet Ginsburg took it further, pressing Keller on the number of Texas women who would be burdened by HB2 (according to Keller, 25 percent, or roughly 1.5 million women, of reproductive age.)

It's these women, Ginsburg said, that the high court must focus on: the women who won't be able to obtain a safe abortion because of their zip code and financial circumstances. "You don't look to all the women who are getting abortions," Ginsburg reminded Keller. "You look only to the women for whom this is a problem."

Upon leaving the Supreme Court on Wednesday, Amy Hagstrom Miller, CEO of Whole Woman's Health and the lead plaintiff in the case, made SCOTUS and the state of Texas understand that she won't be backing down. In her powerful remarks, Hagstrom Miller acknowledged that this case is not about her clinics, but about every person in America who needs safe, affordable and equal access to abortion care:

It has been a long, difficult road to get to this point, but that’s nothing compared to the obstacles Texas women will face if HB2 is not struck down. We’re fighting a harsh, cruel law that does nothing to promote women’s health. Today we stood up for the woman from Lubbock who will drive over 250 miles one way to end her pregnancy. We stood up for the mom from Laredo who will look through her cabinets, hoping to find something that will end her own pregnancy because she can’t afford the travel, the child care or the multiple days off work that have become part of getting an abortion in Texas.

Over these past 3 years as we have fought this law, Whole Woman’s Health has invited cameras and reporters into our clinics, we have opened our doors to the public and we have shared thousands of pages of documents with the state. While our opposition hides behind junk science and secret stings, we have made our case openly and honestly, and we stand in the light.

Our case, Whole Woman’s Health vs. Hellerstedt, isn’t about one clinic or even one state. It is about every single one of us. Because we all should expect equality, dignity, and justice in making our own health decisions. At Whole Woman’s Health we know we’re on the right side of history — and we’re hopeful that the court will be as well.

Texas' onerous HB2 law will disproportionately affect low-income women and women of color, particularly those residents of West Texas and the Rio Grande Valley. As the Notorious RBG previously put it, we must focus on these patients who will be the most burdened by the law, and fight for their fundamental right to a constitutionally protected medical procedure.

Fortunately, Kierra Johnson of URGE: Unite for Reproductive & Gender Equity, was on hand at Wednesday's rally outside the Supreme Court to give us these wise words inspired by Beyoncé. "Today is a call to get in formation," Johnson said. "We want it all. We demand it. We deserve it. We got work to do so get out and slay it."

Writer-actress-comedian extraordinaire Tina Fey has a new movie opening this weekend, and while it doesn’t star her BFF, Amy Poehler, it’s sure to be a female-friendly flick that doesn't play into the stereotypical on-screen gender roles. Fey discussed her new film, Whiskey Tango Foxtrot , in a brief interview with The New York Times this week, and how things played out differently now that she was one of producers of the film. Now that she's producing her own movies (Fey was also credited as a producer on Sisters), the 30 Rock star said she can ensure that there's no faux-female rivalries or roles showing women as generally catty, terrible, baby-obsessed people:

“Sisters” was the first time I was a producer on a film, and this is the second. It’s much more gratifying to have some say. I really like that Margot and I, we don’t start out with some kind of knee-jerk, immediate rivalry, because that wouldn’t ring true to me. Having been in environments where there’s very few women and a lot of men, that usually bonds you immediately. I also really liked that no part of this story is Kim being like, “And I should have a baby!”

5. Melissa Silverstein Calls Out The Directors Guild Of America: Where Are The Women?

Speaking of Hollywood, we know the it’s still a land ran by white men and lacking any diversity, be it gender, race, or sexual orientation. Currently, no studio heads are women. Although there are more than 1,300 female members of the Directors Guild of America, female directors comprised just 7 percent of the top 250 films in 2014, according to the latest study from the Center for the Study of Women in Television and Film at San Diego State University.

In a scathing open letter to DGA President Paris Barclay, Indiewire's Women and Hollywood editor Melissa Silverstein chewed out the DGA for claiming its going to support its female members, but then continually finds no remedies or makes no effort to hire women:

As President of the Directors Guild of America, your job is to represent all directors in Hollywood. From what I can tell, you are a working director with lots of credits and I'm sure you're very busy, but there is a crisis going on in your Guild, and in the industry, and it has to do with the lack of opportunities for women and for people of color to get jobs.

According to your Guild's recent research, men still get the lion's share of jobs. While more and more TV shows are being made, women directors, who number about 1,300 in your guild, still don't have access to opportunities. Even first-time TV directors (and we know that TV jobs are the bread and butter of most all directors, especially women) the amount of women getting those gigs actually decreased last year to 16% from a not-so-whopping 20%.

... The point I am trying to make is that the list of women directors is long and deep and it's about time that people start acknowledging that. We all know the are upteen excuses as to why women don't get hired to work, but it's the job of the Guild to be pushing for opportunities for ALL members.