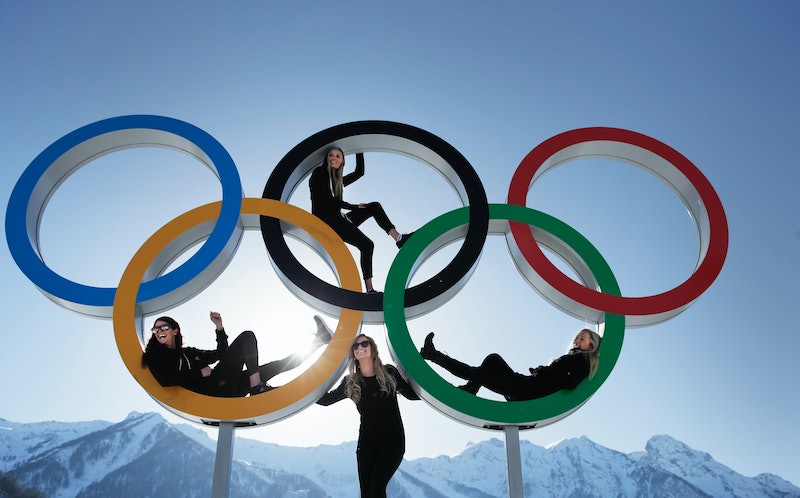 So it begins: media reports out of Sochi have already flagged some alarming cultural differences, and unfortunately, many of them center around the bathroom. These new tweets more than just rival the viral double-toilet tweet out of Sochi a couple of weeks ago — try cloudy yellow water, no flushing, and stray dogs sunning themselves outside hotels. The games haven't even started yet, but at this rate, Sochi is guaranteed to be remembered as National Lampoon's Winter Olympics rather than the most expensive Olympic Games ever.

Hundreds of the world's media will be staying at the Ekaterininskiy Kvartal accommodation complex, the nucleus of many a nightmare Sochi story. There was the journalist who reported someone sleeping in his bed, and the misguided blaring techno music that greeted jet-lagged and exhausted reporters. Semen-covered beds and marauding stray dogs — which are reportedly being killed —complete the picture, but don't forget about Sports Illustrated journalist Brian Cazeneuve, who clambered out of his hotel window after he found the doors to his room locked and was unable to leave.

The unique combination of the journalists' social media savvy and barely-finished construction work has made for some of the funniest tweets of the year as the media finds themselves strangers in a very strange land ... and encounter plastic water bottles that turn out to be gin.

Greg Wyshynski, editor of Yahoo! Sports' 'Puck Daddy' blog, sends his dispatch from a Russian toilet that does not accept the flushing of toilet paper. A sign reads, "Please do not flush toilet paper down the toilet!" Good start.

The Chicago Tribune's Stacy St. Clair sends reports of yellow water that hotel staff advised her not to use on her face "because it contains something very dangerous." She tweeted that she took the Kardashian route and washed her face with Evian.

Detroit Free-Press journalist Jo-Ann Barnas does her civic duty by reminding everyone to watch out for the gaping holes in Sochi boardwalk when gazing out to sea.

CNN sports producer Harry Reekie points to the artfully draped curtains in his Sochi accommodation that looks like a testament to Mötley Crüe and the art of trashing hotel rooms.

Joerg Reuter, in Sochi for his fifth Olympics and working for the European Pressphoto Agency, told the Associated Press about his Sochi experience upon arrival, but says that he now has a room he's happy with.

"The outdoor area and floors/staircase/elevator inside were still under construction and completely dirty," Reuter wrote, adding that the room he was shown "had no light in the main room, the water out of the tap was yellow/brown, the air conditioning, TV, kitchenware were all not working ... Beside this the room was totally dirty and everywhere covered with dust."

"In some rooms you actually saw that there are still the construction workers sleeping and living."

More like this
TV Schedules Undergo Major Changes For The Queen's Funeral
By Sam Ramsden
Chelsea Clinton On The Best Advice She Ever Got From Her Mom
By Brianna Kovan
Craving The Beach? Here's Your Guide To A Solo Vacation In Turks & Caicos
By Alexis Morillo
Twitter Is Saying The Same Thing About Roger Federer’s Retirement From Tennis
By El Hunt
Get Even More From Bustle — Sign Up For The Newsletter