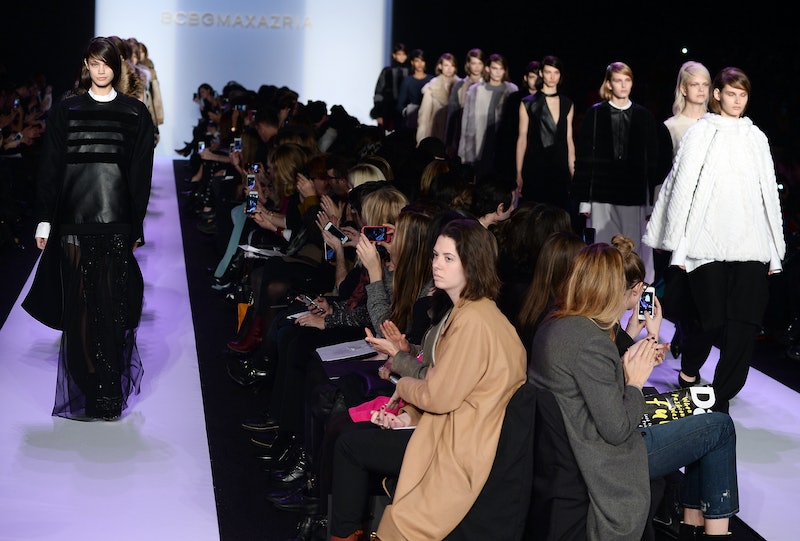 The fact that Valentine's Day lands during Fashion Week every year is not lost on most fashionistas and street style mavens. Valentine's Day, or Single Awareness Day if you're so inclined, tends to overshadow the entire month of February with its hostile takeover of retailers from Hallmark to Victoria's Secret. But the tour de force that is Fashion Week has encroached on the holiday's domain, especially for those ladies attending runway presentations. Fashion Week itself — and the lead up to it — has become an entirely different kind of holiday, one that you can celebrate regardless of your relationship status.

Winter Fashion Week began to coincide with Valentine's Day in 2009, when the fashion extravaganza began on February 13th and continued on through the following Friday. Fashion Week provides an excellent alternative to the holiday designer Chris Benz calls a "dubious" one.

While Valentine's Day is made for couples, fans of the color pink, and those who binge-watch romantic comedies, Fashion Week is just as much fun for singles as those celebrating a 10th wedding anniversary. There are no pre-requirements for enjoying Fashion Week, only that you harbor a not-so-secret obsession with apparel. While Valentine's Day exerts pressure on couples to demonstrate their affection stereotypical and ostentatious ways (it may be time for the singing Valentine to retire), Fashion Week is all about bucking tradition and touting sartorial independence. Valentine's Day focuses on catering to your significant other, while Fashion Week is all about you. Just ask Fashion Week alum and Man Repeller blogger Leandra Medina, whose fashion-forward manner of dressing is self-labeled as "sartorially offensive" and "may result in repelling members of the opposite sex". A hot date may not understand why you're wearing a boxy gold lamé top and adorned your bag with a Fendi Bag Bug, but at Fashion Week your street style brethren will applaud you all the way to Lincoln Center. Whereas Valentine's Day is more of a members-only occasion for couples, Fashion Week is even better when you're single: all the better to wear idiosyncratic outfits and spend your off hours scouting fashion shows without worrying about a bored hubby.

Those who work in the fashion industry have expressed various responses to the coexistence of the two occasions, but many seem to place greater cultural significance on Fashion Week. Stylist Rachel Zoe documented her Fashion Week experience for Bravo TV show The Rachel Zoe Project in 2010, emphasizing her somewhat frustrated husband Roger's reaction when the show schedule interfered with not only the holiday, but with their anniversary, as well. What becomes apparent to the viewer is Zoe's intense dedication to her work and the fun she has attending fashion shows, which ultimately takes precedence over romantic celebrations. And Zoe clearly takes pride in the business she has built as an individual. While Valentine's Day is a holiday for those in a relationship, Fashion Week is a fête for the independent individual who celebrates distinction.

To be honest, though, I think I definitely associate V-day more with fashion week than with anything else!

Some designers even inspired show attendees to reinterpret the holiday as a day of fashion adoration. Ralph Lauren's Fall 2013 show featured a stream of elegantly outfitted models whose overall aesthetic, the Examiner claimed, "was the perfect Valentine's Day present". When a creative spectacle like Fashion Week collides with a holiday that excludes a huge percentage of the population, Fashion Week is going to come out on top.

Its accessibility gives it the win, too; anyone can participate in the fun of Fashion Week, whether you watch the shows at home or secure a seat at a coveted designer presentation. As technological advances including live streaming allow us to sit in the front row of fashion shows and read updates from live-tweeting celebrities, Fashion Week is becoming increasingly accessible to the masses. It certainly beats diving into a pint of Chunky Monkey while Netflixing The Notebook on Valentine's Day.

Fashion Week, it seems, makes overhyped Valentine's Day seem frivolous in comparison to celebrating artistic innovation at every level, from street style to designer fashion. Instead of focusing on relationships, marital status, or an unhealthy hatred of those who are coupled, Fashion Week redirects our attention to all of the things we can enjoy as a single. If Valentine's Day is about love, a love of divine couture is exactly what we plan to celebrate this year.

More like this
Cyber Monday Deals 2022: The Best Fashion Sales To Shop
By Dominique Norman
The Best Black Friday 2022 Fashion Deals To Shop This Year
By Dominique Norman
12 New Year's Nail Ideas That Are Truly Stunning
By Jordan Murray
Here Are All 703 Outfits Rachel Wore On Friends
By Kat George
Get Even More From Bustle — Sign Up For The Newsletter