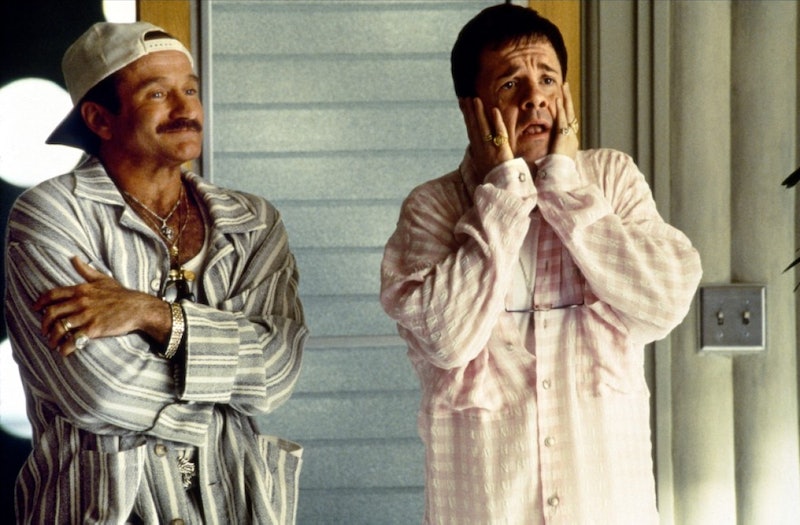 The Birdcage is one of those movies that I could just watch again and again. When it is on television, I pretty much stop what I’m doing and tune in. It’s really a productivity killer. Twenty years later, I think the film is just as progressive for the gay community as it was in 1996. At its core, The Birdcage is about a loving gay couple and the hoops that they have to jump through in order to be accepted into “regular” society. All Armand and Albert want is for their son, Val, to be happy — so Albert dresses up in drag for his family. It’s also hilarious, and the combination of Nathan Lane and Robin Williams (especially Robin Williams as straight man) can’t be beat.

For those of you who haven’t seen the film, Williams plays Armand Goldman, who is a gay Jewish man living in Miami. He’s been in a relationship with Albert, who performs at Armand’s club as a drag queen. When Val, their son, comes back from college and announces he’s marrying the daughter of a very conservative politician, Val asks that they pretend that they are not the gay couple they actually are when they all meet. Katherine, Val’s birth mother, is supposed to be playing his mother (replacing Albert), but when she gets stuck in traffic, Albert dresses up as a woman and, of course, hilarity ensues. The movie’s a lot more nuanced than that, but those are really the main points. If you’re a fan of The Birdcage like I am, you may think that you know everything about the film. Here are a few pieces of trivia that I bet you did.

1. There Was A Lot Of Improvising

Mike Nichols, who directed the movie, let Nathan Lane and Robin Williams riff and improvise to their hearts’ content — only if they stuck to the script in one take of each scene. Seems fair, no?

2. It Had A The Simpsons Connection

Hank Azaria, who played Agador, provides a plethora of voices on The Simpsons , including Moe and Chief Wiggum. The show is mentioned in The Birdcage.

3. Age Was Just A Number

4. The Movie Has French Origins

Though it seems pretty American in its remake, The Birdcage is based on the French farce film La Cage aux Folles , which has most recently been a Broadway music starring Frasier’s Kelsey Grammer.

Legendary comedian Steve Martin was originally cast as Armand and Williams was supposed to be Albert. Scheduling conflicts made Martin drop out, which was for the best, because Williams wanted to play Armand, anyway.

6. The Birdcage Made Bank

The movie has made over $185 million to date, which makes it the top grossing gay-themed movie of all time.

7. The Laughter Was Contagious

Remember the toast scene where Armand and Albert are eating breakfast? Director Nichols had to be covered by a sound blanket during filming because he kept cracking up during the scene.

Hank Azaria, the voice actor and comedian who played manservant Agador Spartacus, figured out a short time into filming that the voice he had crafted to play Agador was actually his grandmother’s. Keeping it in the family, I see.

9. The Working Title Had An Aviary Theme

The original title of The Birdcage was Birds Of A Feather — the first drafts of the script still have that title on them.

The Birdcage made $18.3 million dollars in its opening weekend. That made it the highest-grossing weekend opening of a movie with openly gay lead characters until Sascha Baron Cohen’s Bruno came out in 2009.

11. There Was So Much Broadway Influence

The song that Armand and Katherine sing in her office is “Love Is In The Air,” which was in A Funny Thing Happened On The Way To The Forum. It was supposed to be the first number in the show, but was cut in favor of Comedy Tonight, which Lane sang in the 1996 Broadway revival.

More like this
Revisit 1992’s 'A League Of Their Own Cast' Photos After The New TV Series
By Grace Wehniainen
At 28, Lesley Manville Was Acting, Picketing, & Singing Kate Bush Songs
By Olivia-Anne Cleary
Reese Witherspoon Gave Fans Hope For 'Legally Blonde 3' After This Surprising Movie Inspired Her
By Jake Viswanath
Rita Ora & Taika Waititi Are Reportedly Married
By Sophie McEvoy and Catharina Cheung
Get Even More From Bustle — Sign Up For The Newsletter