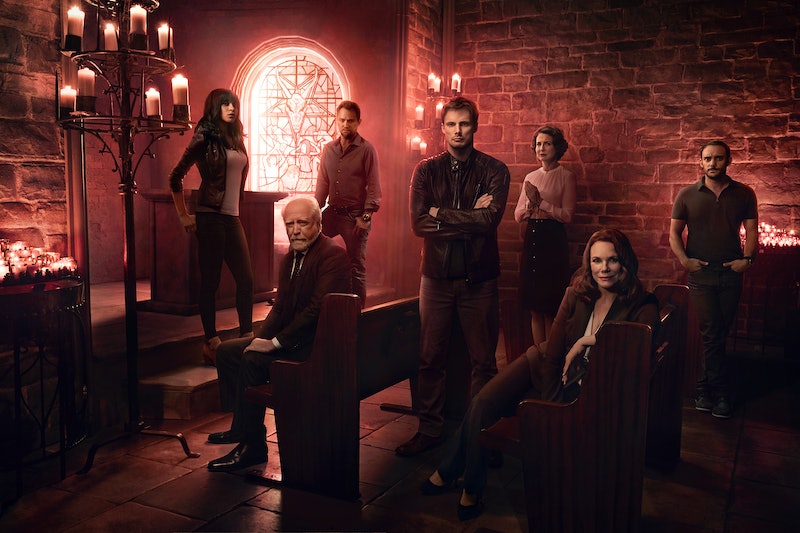 "It's all for you, Damien!" This week, A&E doubles down on its Monday night block of horror by pairing veteran series Bates Motel with new original series Damien . Based on the classic 1976 horror film about the little boy with the devil of all daddy issues (literally), it should make for a perfect partner-in-crime for the show about the son with the devil of all mommy issues. But just like Bates Motel took Psycho and gave it a unique twist — simultaneously rewinding the clock for a prequel but also updating the story to modern times — so will Damien present a new chapter in the story of the Son of Satan. But when exactly does Damien take place in relation to The Omen ?

Unlike its Monday night companion, Damien isn't a prequel; considering that the titular tyke was only five in The Omen, there's not much of his story to tell before the events of that film. Rather, the new drama developed by The Walking Dead's Glen Mazzara goes the other way in time, acting as a sequel that directly follows up on the events of the film. But how far in the future does Damien take us? According to Mazzara in an interview with io9, the Antichrist is now "a 30-year-old war photographer who has forgotten everything about his Satanic past."

Considering that Damien turned five in The Omen (during that memorable birthday party where his nanny jumped off the roof with a noose around her neck), that means that 25 years will have passed since his father tried to kill him with a ceremonial dagger on the altar of a church. So which Omen does Damien follow, the '76 original or the 2006 remake starring Liev Schreiber and Julia Stiles? Since the show is contemporary and 25 years ago from 2016 is 1991, the answer is: neither, specifically. Like Bates Motel, it would appear that, while Damien is inspired by the events of its cinematic predecessor, it will take place entirely within its own temporal bubble unrelated to the actual timeline of the original.

But what about the other sequels? (There were two big screen follow-ups and a fourth made-for-TV entry, spanning from 1978-'91.) Much like last summer's Jurassic World ignored the events of both Jurassic Park sequels, instead acting as a direct sequel to the 1993 original, Mazzara told Nerdist that Damien will ignore all the sequels to The Omen . This makes sense, since the Omen sequels involved a teenage — and then adult — Damien embracing his destiny as the Antichrist, and Damien will feature a 30-year-old version of the character (played by Merlin's Bradley James) who is unaware of his demonic heritage.

In addition to James, Damien will also star Barbara Hershey (Black Swan) as the young man's Satanic mentor, similar to the role of murderous nanny Mrs. Baylock in the original. Other prominent roles will be played by Scott Wilson (The Walking Dead's Hershel), Omid Abtahi (The Hunger Games: Mockingjay — Part 2), and Megalyn Echikunwoke (The 4400). The series premieres this Monday, March 7, at 10 p.m. ET.