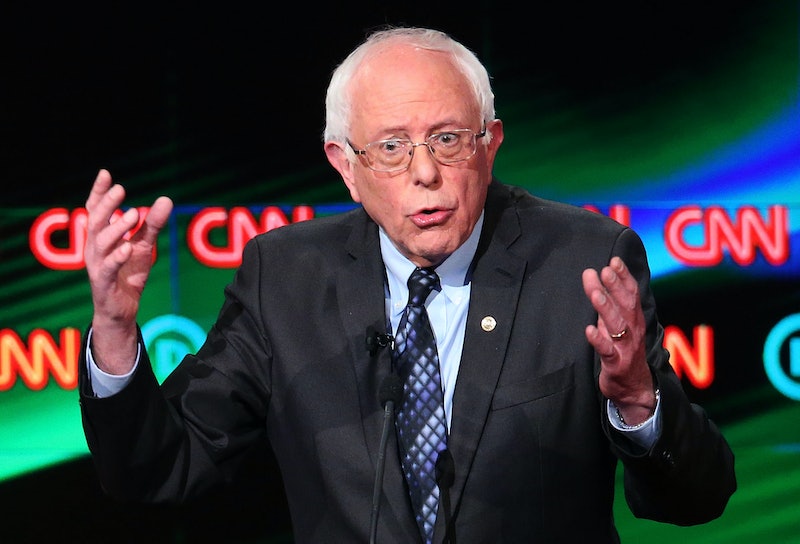 Up until he was asked the question point-blank at the Democratic debate Sunday night, Bernie Sanders hadn't exactly spoken directly about being Jewish on a national stage. At his victory speech after the New Hampshire primary, for example, he described himself as “the son of a Polish immigrant who came to this country speaking no English and having no money.” I, too, am the product of Jewish immigrants from Poland. But they would never, ever have considered or called themselves Polish. They were Jewish, and the Polish were the organizers of the pogroms they were fleeing.

So last night, as I sat on my couch and caught the last few minutes of the Democratic debate on CNN, I held my breath as a very goyishe-looking Flint resident, Denise Ghattas, asked Sanders if he thought “God is relevant.” He replied by saying, “The answer is yes,” but pivoted quickly to say, “I think when we talk about God, whether it is Christianity, or Judaism, or Islam, or Buddhism, what we are talking about is what all religions hold dear. And that is to do unto others as you would like them to do unto you.” He went on to talk about values of fairness and equality; the foundations of his campaign. There it was: another classically secular Jewish answer that God can be found, essentially, in the values of love and social justice.

For a second, that seemed to be it — until host Anderson Cooper took it further by following up and citing recent criticism that Sanders is deliberately keeping his “Judaism in the background,” and asking the candidate whether that was true. Sanders took a slight breath and looked down, just for a moment. Though it might have been imperceptible to some, I saw him make the decision to come out fully right then and there and explain his Jewish identity. Here's what he said:

Look, my father's family was wiped out by Hitler in the Holocaust. I know about what crazy and radical and extremist politics mean. I learned that lesson as a tiny, tiny child when my mother would take me shopping, and we would see people working in stores who had numbers on their arms because they were in Hitler's concentration camps.

I'm very proud of being Jewish. And that's an essential part of who I am as a human being.

As often happens when I hear Bernie speak, I kvelled. His answer articulated what my Jewish identity means to me as well. I feel an obligation to care about immigrants' rights, social justice, our civil liberties, and racism, because I know that just two generations ago, I would have needed to either downplay or hide my identity, or much, much worse. My grandparents were refugees, and they needed a safe haven when most of the world either didn't want them or kept quotas for their entry. They were fleeing religious persecution and war.

So when Donald Trump talks about "building a wall" to keep out Mexican immigrants, many of whom are fleeing violence, or making Muslims register in a government database, or keeping Syrian refugees out, I consider it very personal, and I worry that I am witnessing the rise of something truly terrifying. Like Bernie, seeing persecution and racism reminds me of my own history, and I feel a nearly-genetic obligation to do what I can to help stop it. It's a concept so integral to Jewish identity that it is even found in our religious teachings. It's called Tikkun Olam, or "world repair," and in my opinion, it is the most important part of being Jewish.

To me and many other secular Jews like Bernie, Judaism does not mean going to synagogue, keeping kosher, or any other traditional religious practice. It means giving a damn about social justice for everyone — even when it's not "your issue." So as I sat and watched Bernie's response, I understood exactly what he meant. But I was also scared. Scared that he'd just put the final nail in the coffin for his campaign — a coffin that so many people seem eager to build. Because while I believe America is ready for a female president, electing a socialist president — no, specifically a Jewish socialist president — seems to be outside the bounds of my wildest imagination.

Ghattas' expression as she listened to Sanders' response — a mix of suppressed discomfort, fear, and politeness, followed up with a swift mention of her church and a gradually relaxed expression as Clinton began to speak about attending it — confirmed my fears. Surely, it represents progress that a Jew and a woman were up on that stage (and being moderated by a gay man, no less). But Ghattas' uncomfortable face, and Sanders' apparent hesitancy to bring up his Jewish identity until he was asked outright whether he was hiding it, prove that being Jewish, while now a very privileged position in American society by virtue of our (usually) white skin color and average economic and educational advantages, is still not something you want to advertise.

I hopped on Twitter to see what was being said, bracing myself for a wave of antisemitism. To my surprise, I found much more support for his comment than anything else — certainly less hatred than the sexist comments that you often see about Hillary.

Some were seeing the irony in Sanders' comment earlier in the night about how when you're white, you "don't know what living in a ghetto is like," when so many Jews actually lived in ghettos.

Most Tweets were supportive or funny, noting the historic moment.

It's not an accident that Sanders hasn't emphasized being Jewish. It also wasn't an accident that in 2008, Clinton largely downplayed the fact that, if elected, she would be the first woman president, and spent a lot of time instead talking about how she would be strong and powerful instead. Her campaign has learned from that mistake, and this go-around, she is wisely making it a point to counter criticisms that she's an establishment candidate by reminding voters just how historic her election would be.

But there are a lot more women than there are Jewish voters in America. And while it's not kosher to come off as openly antisemitic as Ann Coulter anymore, I think that in a country in which Trump is ascendant, we can safely say that Sanders has made a calculated decision to avoid hammering home the fact that he would be the first Jewish president — and a secular socialist one at that.

Not that many, Ann Coulter. But for many of us who reside in the U.S., being Jewish has become an ethnic identity; a genetic and cultural difference, but not a practiced religion. A 2013 Pew research study found that not only do 22 percent of American Jews claim to be “Jews of no religion,” but that 62 percent of Jews overall — regardless of whether or not they identify as “religious” — say that to them, being Jewish is mainly about their ancestry and culture.

But the question remains: Is a Jew electable? Last year, an oft-cited Gallup poll found that 92 percent of Americans said they would vote for a Jewish president — double the percentage from when the organization first asked the question in 1937. But guess what they wouldn't vote for? A socialist or an atheist.

It's likely that Sanders is all three — a Jew, socialist, and probably an atheist (or at least secular). This is not a contradiction. It is a distinct identity, and it is one I was proud to hear him articulate last night. What Bernie Sanders' identity politics represent is clear to those of us who were raised in a similar tradition. As the New York Times put it in a recent piece, titled "Bernie Sanders Is Jewish, But He Doesn't Like To Talk About It":

Mr. Sanders, those who know him say, exemplifies a distinct strain of Jewish identity, a secular offshoot at least 150 years old whose adherents in the shtetls of Eastern Europe and the jostling streets of the Lower East Side were socialists, anarchists, radicals, and union organizers focused less on observance than on economic justice and repairing a broken world.

It is this history that makes me proud, and reminds me why I need to continue being "out" and answerable to my own Jewish identity — especially in a time when the Israeli government's oppression of the Palestinian population might make me want to hide in shame over how far we've strayed from our core principals as a people. In Israel, the oppressed have become the oppressors — and we Jews around the world need to care. We need to fight for the rights of our Palestinian cousins, and for the rights of immigrants at home.

We must also stand up for the rights of refugees, and learn our own family stories. Because like Sanders' said, we've seen this before. Or at least, our grandparents have. They didn't want to let Jews into this country when we were being killed. They didn't want us taking their jobs or marrying their kids. Just because we've mostly assimilated, that doesn't mean we get to stop caring about the way injustice repeats itself.

We must acknowledge and check our own white privilege, but not assimilate to the point where we forget that our identity has historically been anything but an advantage. Nor should our history give us a sense of entitlement — it must be our mandate to fight for those who are currently persecuted. Jews need to stand with movements like #BlackLivesMatter and remember that within our grandparents' lifetime, certain signs on swimming pools in America read "no Blacks, no Jews, no Dogs." There but for the grace of history go us, and we are needed as allies now more than ever.