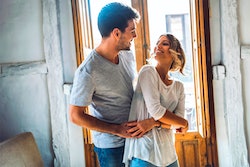 "Excuse me, are you Jewish?" It's a question most Jewish-looking people living in New York City are familiar with: orthodox Jews here have a habit of offering shabbat candles to secular-looking Jews on the street, in the hopes that we might light them and induce a mitzvah. But this time when the Chabad members stopped me — and not my Jewish boyfriend, Jacob — to ask the question last Friday, the incident held more weight.

"You see?" Jacob smiled (I thought somewhat smugly) as we walked away. "It's because you're 10 percent more Jewish."

It's what I'd suspected before — I have the bigger nose, the darker hair, I can read Hebrew, and went to Jewish day school — but now, we had the DNA test results to prove it: I am 96 percent European Jewish, while Jacob is "only" 86 percent.

We'd recently decided to take the DNA test after Jacob sent me the link to the site DNA Ancestry one day, half-jokingly suggesting we should take it to find out which one of us was related to Albert Einstein. The test, which promises to help you "discover your ethnic mix and more," takes your DNA (using a saliva sample you send in) and tells you where you came from, for the price of $99. I was intrigued, mostly to find out whether or not this man I may or may not want to reproduce with one day is my distant cousin.

After all, I'd read that most Jews are related to each other as fourth or fifth cousins, and having dated only goyim for the last five years, I was a little concerned that our new love could be unwittingly incestuous. I was also somewhat interested in knowing whether I was related to anyone famous. But Jacob? I got the sense he really wanted to know if he had any other ethnicities that were part of his makeup. Probably because he's always been told that he "doesn't look that Jewish," and he's a good dancer and tans well, Jacob had a suspicion that he might have something more to his DNA than what his two Eastern European Jewish sides had led him to believe.

We sent off the spit samples to DNA Ancestry and waited six-to-eight weeks for our results.

They came, it turned out, a few days before Jacob's 35th birthday. Sitting around slightly tipsy in his friend's ridiculous hotel room at le Parker Meridien, we opened the results on an iPad. Jacob examined his first. Then I opened mine.

Though we didn't exactly laugh, it seemed almost like a punchline. Here, definitively, was proof: I am "more Jewish" than Jacob.

We were relieved to find out, via the site's search, that we are not even sixth or seventh cousins — or, at least, that a search for either of our names as a relation on the other's profile revealed "no results."

I was obviously happy about that, but a little disappointed to find that DNA Ancestry didn't seem to have a huge database of impressive and famous people we were related to. Nope, just other Jews in other towns. I guess Einstein never sent in the saliva sample.

We fiddled around with the website for a few more minutes the next day, just to double check that we were not in fact cousins of any degree, and so that (it seemed to me) Jacob could revel in his newfound six percent Italian/Greek heritage a bit more.

the results seemed to confirm what I already felt: something about me is simply "more Jewish" than Jacob.

Over the next few days, particularly following the shabbat candle-incident, I found myself, for lack of a better word, resenting Jacob. He was excited to find out that he had other genetic origins to him, and I in turn found myself projecting the identity of self-hating Jew onto him. Why did he seem so smug? Why did he even want to be anything else? I'd rolled my eyes before when I'd seen family (on both our sides) probe him about why he'd chosen to study German philosophy and live in Berlin for three years. The subtext had always been clear: what was he, a self-hating Jew?

He would say, unabashedly, that's ridiculous. I would say, that for all of us, it's still complicated.

Both Jacob and I are the children of Jewish New Yorkers who moved to California in the '70s and experimented with drugs and anti-war activism. Our backgrounds couldn't be much more similar ... and yet they are distinctly different. Jacob's grandfather and grandmother were born in America, mine were not. He is third generation, I am second. Perhaps as a result, his parents had more money growing up, and are still better off than mine. I look more Jewish than he does and was given a Jewish education, while he comes from three generations of atheists. I put that I was Jewish on my OkCupid profile, he didn't. Neither of us go to synagogue (or can spell it correctly on the first try, for that matter) but the results seemed to confirm what I already felt: something about me is simply "more Jewish" than Jacob.

As the week wore on and we shared our DNA results as anecdotes at parties and dinners with friends, my creeping resentment of Jacob's 14 percent ethnic diversity lingered in the back of my mind. I found myself jumping in with mean-spirited comments, like that "he likes to think he looks white, but the photos reveal otherwise."

When friends commented that he could indeed pass for Italian or Greek, I found myself jumping in to add that "all Jews look Italian — they always think I'm Italian too." I felt oddly defensive, kind of like when non-Jews criticize Israel, even though I'm about as left on the topic politically as you can get.

At the same time that I was feeling all of this, I started thinking about my nose again.

At the same time that I was feeling all of this, I started thinking about my nose again.

At various low points, I've often been convinced that if I just got a nose job, the entire world would be different for me — new opportunities would open up, I'd get any man I wanted, and I'd even be more valued at work. In my darkest mood, having a smaller nose would somehow make me not only prettier but also "more approachable," and "less harsh looking." (Read: less Jewish, more "feminine.") No matter how many boyfriends told me they loved my nose, (including Jacob), I always had the sneaking suspicion they were lying to protect my feelings.

On good days, I actually really like my nose. I've pierced it in order to help myself find it beautiful, written and edited articles about women and their strong noses, and tried to talk about my self-consciousness more openly in an effort to overcome it. (Not to mention the picture I just posted above, which is actually kind of a big step for me.) Still, it remains the litmus test for the state of my body image: am I hating my nose again, or am I finding it beautiful? When this Bustle video posted recently and I inwardly recoiled at my nose on camera, I realized I hadn't made as much progress as I'd hoped.

As I tried to think about what this DNA test meant for me and my relationship, I found myself inwardly accusing Jacob of being a self-hating Jew — when really, it was me who was feeling suddenly more self-conscious about the nose and unruly hair that were the clearest physical markers of my jewishness. It was me who was convinced I wasn't beautiful enough. Staring at Jacob's beautiful Bengali friend at his birthday party, with her large eyes and petite nose, I found myself wishing I could be half as elegant and effortless as she seems, but knowing I never would be. Perhaps she looked at me and my white skin and wondered what it would be like to be effortlessly assimilated.

Being Jewish is a particular brand of tricky right now; most of us have to acknowledge our undeniable assimilated white privilege, but also make the decision as to whether or not we want to identify as white.

For my part, I don't, and proudly so. I acknowledge my white privilege and try to be aware of all that comes with it — which is why I mark the box as "caucasian," for one thing — but I identify as ethnically Jewish, and that means something very different, if intangible to me.

Percentages aside, the man is profoundly sweet, impossibly stubborn, intellectually ravenous, sexually attentive, and curiously argumentative. If that's not a Jewish man, well then, I don't know what is.

It means that sometimes, Jacob and I will play with words in a way that reminds me of our grandfathers. It means that when we argue, we gesture wildly and feel closer. It means that our hair gets extra curly when it's humid out, and that neither of us are particularly photogenic. These are not inherently Jewish qualities, and yet when I feel us expressing them together, I feel distinctly of my tribe.

I also know that Jacob's deeply proud of who he is, and that should we have children, they will be taught all about contemporary Jewish literature and history by their father, even if he doesn't go to temple. Percentages aside, the man is profoundly sweet, impossibly stubborn, intellectually ravenous, sexually attentive, and curiously argumentative. If that's not a Jewish man, well then, I don't know what is.

As for me? I've decided I'm proud to be the "more Jewish" one in this relationship. I will carry that menorah torch, because it is who I am; it is encoded right there in my very DNA. I am a Jewish woman — and I hope, more and more each day, to own all of the power, complexity, and beauty that comes with that identity. Big nose, frizzy hair, and all. Especially those parts.