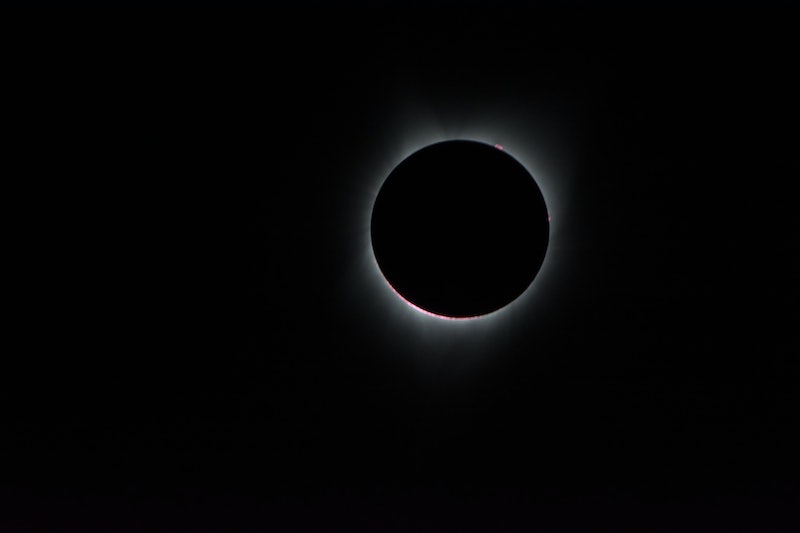 Witches and space nerds, unite! Tuesday, March 8, marks 2016's only total solar eclipse. But what does a solar eclipse mean? Well, it depends on who you ask, but the short answer is: Um, a lot.

First, let's talk about the astronomy: A solar eclipse occurs when the Earth passes through the Moon's shadow. Tuesday's astronomical event will be a total solar eclipse, meaning the darkest part of the Moon's shadow, called the umbra, will completely cover the Sun for about four minutes. Spooky, right? This would probably also be a good time to remind you that you really, really should not look directly at a solar eclipse. Seroiusly — doing so can kill cells on your retina. If you want to catch a safe glimpse of the event, check out National Geographic's DIY pinhole viewer tutorial.

The bummer about total solar eclipses is that they're super short and super localized. This one, for example, will only be seen from parts of Indonesia, Borneo and Sulawesi. People in Australia, South China, Southeast Asia, Alaska and Hawaii will witness a partial solar eclipse — like someone took a giant bite out of the Sun — once the Moon's second shadow, the penumbra, passes across the sky. For those of us in the continental United States we'll have to wait until 2017 to see a solar eclipse in real time.

Astrologically speaking, eclipses usher in a time of change. You know how new moons and full moons bring with them a special kind of power, one that casts experiences in your life in a new light? Well, since eclipses tend to coincide with new moons and full moons (March 8, for example, is a new moon), they bring all that power and then some. They signify the closing of one door and the opening of another. Solar eclipses in particular offer an opportunity to heal a deep wound within your soul, as they mark an evolving sense of self. You may begin to find new, inventive ways of addressing long-standing hurdles in your life.

Yeah, big stuff is on the horizon, dudes.

Eclipses also fall simultaneously within two signs — those which are opposites (six months apart) on the horoscope wheel. Tomorrow's is a Pisces-Virgo eclipse, so while we'll all feel a little shift in power, all you Pisces and Virgo babes will be riding the eclipse energy wave big time. If your birthday is within the next five days, be especially prepared.

Astrologists suggest keeping your schedule relatively open during an eclipse, and avoiding issuing any major ultimatums. Let the big changes come to you. Solar eclipses in particular bring about positive vibes and exciting, potentially out-of-the-blue opportunities. Be open to them. The only direction is forward.