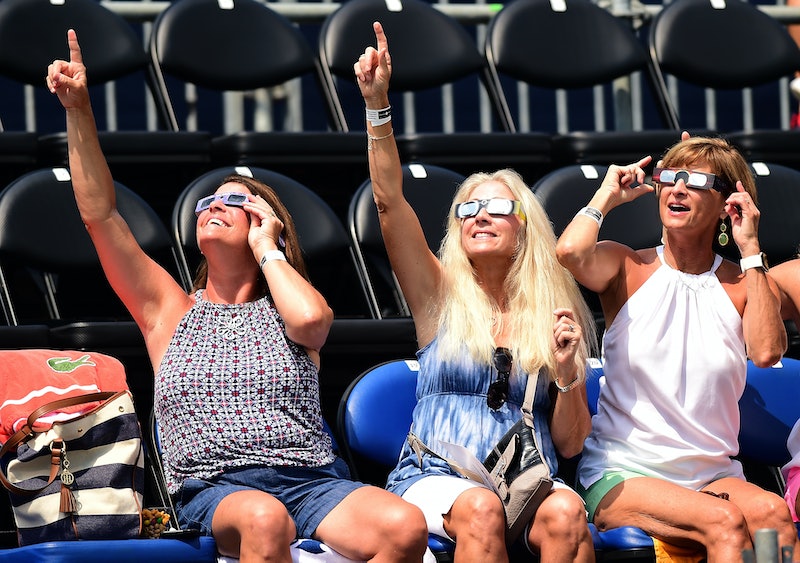 Get excited, astronomy lovers! There's a solar eclipse on March 8, 2016, which is right around the corner. If you're anything like me, you're probably already gearing up for it, because there is nothing that blows my mind like the solar system. This week, the solar eclipse is especially cool, and depending on where you are in the world, it'll actually be over before it begins. I know that sounds weird, but it's true. Isn't science cool?

First, let's break it down into specifics: A solar eclipse occurs when the moon essentially "blocks" the sun, thereby causing the sky to darken. Now, the moon passes between the Earth and sun on a monthly basis, but it's pretty rare for the perfect alignment to create an actual eclipse.

So: Where can you see it from? The answer is a little complicated, because it depends on where in the world you are. On March 8, for example, the solar eclipse will only be visible across an area of the Pacific Ocean. The eclipse will begin in Indonesia and end around sunset just north of Hawaii. If you're viewing the eclipse from somewhere west of the United States — say, from Australia — the eclipse will actually occur on March 9. Weird, right? It has to do with time zones and the International Date Line. For some countries, like Cambodia, Thailand, and Vietnam, the eclipse will only be partial, meaning that the sun will only be partly blocked by the moon. If you're star-gazing from China, Australia, Japan, or Alaska, you'll catch the sun with an eclipse, but it'll likely be less than 50 percent "blocked."

And if you, like me, are nowhere close to being able to see the eclipse in person, at least we can watch it on livestream. NASA is streaming the solar eclipse, which will begin at 8 p.m. EST on March 8.

If you're a huge science nerd like I am, NASA is also offering a Q&A on Facebook prior to the eclipse on Monday, March 7 at 2 p.m. EST. Then, on Tuesday, March 8 (the day of the eclipse), scientists from the Goddard Space and Flight Center are holding an Ask Me Anything on Reddit. Even if you're not quite as into the moon and stars as I am, I think it's definitely worth tuning into because solar eclipses are a rarity. And even if you're not quite so into the science side, remember: Astrology and astronomy are closely linked, so it's worth checking out how the solar eclipse may impact your horoscope this month.