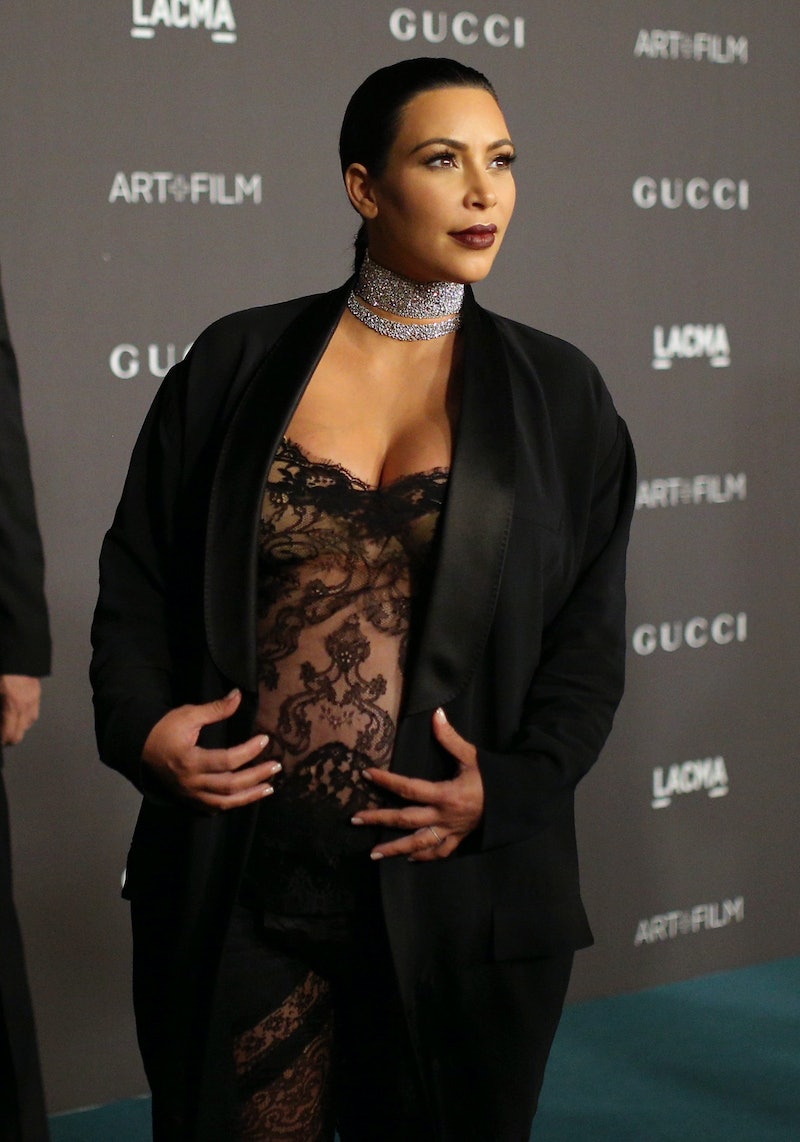 In a world where the intersection of unapologetic nudity and body positivity is finally being discussed, people baring their uncovered bodies on the Internet is nothing new. This is why I hardly batted an eyelash when I discovered that Kim Kardashian posted a nude selfie on Instagram on the morning of March 7.

I wasn't particularly fascinated, since I'd already seen the reality star's naked bod before (shout-out to her Paper Mag photos). But after I looked at the image itself, I began reflecting on how incredibly body pos taking that selfie must have felt to her, based on her well-vocalized qualms and insecurities about pregnancy. In Oct. 2015, she wrote about the stress she was experiencing over her expanding body and the struggle of getting it back to a shape she was personally happy with post-birth. "I feel insecure and most of the time I just feel gross," she revealed.

Her statements might have been tough to swallow, but they certainly aren't unique to her. In a society that values thinness over most things, it's difficult to become a confident woman, especially when you feel that your body is becoming less beautiful through pregnancy. The stigma of gaining weight and of the "post pregnancy body" is strong — yet here is Kardashian, proudly flaunting her gorgeous body only months after giving birth to her second child.

Although Kardashian certainly has a level of thin privilege that arguably makes it more socially acceptable for her to share a nude selfie than it would be for someone size 20 or above, viewers can still tune into Keeping Up With The Kardashians and regularly hear her chastising her body (particularly when she was pregnant with both North and Saint).

The truth is that there's nothing ugly or unnatural about a growing body. So it felt like no small victory to see Kardashian share a nude selfie with the world after seemingly expressing nothing but shame over her body for months on end. Unfortunately — as is common in situations where women or feminine people express autonomy — the responses on social media were plentiful and often discouraging.

Most of us can agree that if Kim K was a fat woman, the general commentary would have been much worse. But even with her straight-sized privilege, and despite the fact that so many people the world over view her body as beautiful, she still got plenty of hate for posting in the nude.

A good portion of social media responses shamed her for claiming her sexuality despite being a mother. Some expressed their sympathies for her children, because it's apparently unacceptable for a mother to be seen nude or exercising control over her body. Unfortunately, pregnancy shaming and slut shaming can go hand in hand, sometimes resulting in the general consensus that one is meant to give up sexuality and self-ownership as soon as marriage and children are in the picture. As one Twitter user put it, "A hoe always gonna be a hoe." Other social media users edited the photo to cover up her body in response to her Instagram caption, which read, "When you're like I have nothing to wear lol."

To equate Kardashian's identity as a mother and wife with her sexuality feels incredibly uncomfortable to me. Although one can assume that her sexuality might intersect with these identities at times, no one person has the ability to invalidate her right to sexual agency and body positivity.

In my own life, I have been shamed for sharing nudes as an act of self-acceptance, not to mention for encouraging others to do the same through my writing. But it frustrates me deeply that as soon as I decide to marry my partner, or as soon as I decide to have children with them, my right to my body and sexuality will be even more limited in the public's eye. I hate to think that mothers, including my own, could feel less entitled to or empowered by their sexuality purely because of social constructs.

Personally, I can't imagine a scenario in which my love and celebration for my body would negatively impact my family. As blogger Emma Oulton wrote on Twitter, "Having kids has nothing to do with whether or not [Kim K] should show her body online. Women are more than just mothers." It's nothing short of troubling that we've yet to eradicate this perception of women with children as non-sexual subservient caregivers, and nothing more.

Kim K was incredibly brave in posting the nude selfie. In a society that undoubtedly makes it difficult for mothers to love their changing bodies and stay confident about their sexualities, it's rad that she has faced her insecurities head on with a nude selfie. Hopefully now we can allow the social media responses to said selfie to serve as a lesson in how important it is for us to change the conversation surrounding mothers and their bodies.

Want more body positivity? Check out the videos below, and be sure to subscribe to Bustle's YouTube channel for more inspo!

More like this
The Best Looks From Kourtney & Travis’ Wedding
By Dominique Norman
What Are "Gym Lips" & Why Is BeautyTok So Obsessed With Them?
By Olivia Rose Ferreiro
Kate Had A Solution When Tom Cruise Broke This Royal Rule At The 'Top Gun' Premiere
By Frances Stewart
'Derry Girls' Creator Teases Exciting Spin-Off Starring These Three Characters
By Olivia-Anne Cleary
Get Even More From Bustle — Sign Up For The Newsletter