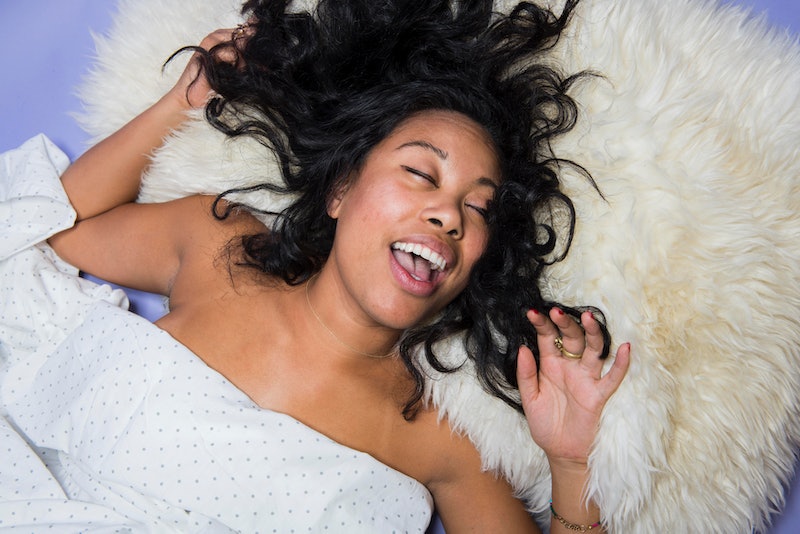 Back in November, I had the first nude photo of myself taken. At 21, and as someone who has had smartphones and romantic partners to send such images to for your years, I realize that my lack of body positivity was probably to blame for something of a delayed start in loving my nude form. Previously, I had felt pretty insecure about my nakedness, which manifested in difficulty having sex without covering up multiple parts of myself up. Going through sexual trauma only exacerbated my relationship with my sexual body even further, as I continued to make efforts to cover myself up even more, and sometimes making efforts not to touch myself at all. I grew afraid of my sexual body, and nervous of its ability to lead to vulnerability and victimization when sexualized by others.

Taking nudes was crucial for me in my journey toward reclaiming my sexual agency and continuing to live my life as body positively as possible. Snapping these photos meant I was sexualizing myself in a way that didn't necessarily have to involve touching. I was controlling and creating the image for my enjoyment only. Essentially, I was sexualizing myself, a concept that was hard to execute through other means. I could strike a pose, snap a pic, and gawk over how lovely I looked... and maybe even get a little turned on.

Even if you haven't experienced a sexual trauma and are just looking for some extra self love, there are many other ways taking nude photos can be a body positive act. Here are just a few.

1. Nudity Tends To Be Stigmatized

Even with references to nudity being quite common in many forms of art and entertainment, there still seems to be a level of discomfort surrounding nudity in our society, often regarding some types of bodies more than others. This modern discomfort was made clear by Playboy, a historically nude magazine, and its recent choice to omit nudity from its pages altogether. The publication cited "times chang[ing]" and the suggestion that nudity no longer "champion[s] personal freedom and sexual liberty" in the way it did when the magazine first launched as its reasons for the shift.

After being programmed for much of our lives to keep our "private bits" covered, it's understandable that nude photos and nude bodies might still elicit a good number of gasps, specifically when revolving around feminine people. Going against the grain, choosing to explore, and learning to love our own nude bodies is a huge act of self love.

2. Because All Types Of Bodies Deserve To Be Seen

In mainstream media, bodies that aren't white, thin, or cisgender often don't get the visibility they deserve. As a result, we sometimes internalize a lot of body negativity if we don't fit these specific expectations, which can make it harder for us to show off what we have. But as people like Laverne Cox and Beth Ditto know — both of whom have both posed nude for magazines regardless of not being the mainstream's mold of beauty — all bodies are beautiful. So celebrate your own beauty and right to feel sexy (bonus points if you share a sexy photo on social media, with a partner, or at an art show-turned-college party like I did).

Just because trans bodies, fat bodies, bodies of colors, and disabled bodies aren't well represented doesn't mean we don't deserve to take our own self-glorified nudes. Use people like Laverne Cox and Southard Ospina as your inspiration!

A little healthy narcissism is nothing to be ashamed of, and arguably crucial in anyone's quest towards body positivity. Unfortunately, the sort of vanity that inspires selfies as well as nudes is often discouraged. Take, for instance, the time sports commentators mocked a group of women from Arizona State who were taking selfies in the stands of a Colorado Rockies game in Sept. 2015.

Before I took my first nude selfie, I was congratulated by many folks who knew I had never taken any, and who deemed the practice unnecessary, excessive, and possibly dangerous (what if someone leaked my nudes? Oh, the horror).

Initially, I took this to heart and regarded those who didn't take nudes (as well as those who refrained from taking selfies in public) as people with more self respect and dignity than the majority of us. I didn't realize, until I tried it myself, that these actions are actually a celebration of a healthy relationship with your body.

4. It Can Be Very Healing

When I finally gave in and took some cute nudes of myself, I realized just how strongly I had been allowing my body discomfort to get in the way of self love. Sexually traumatic experiences in my life had led me to inch further and further into myself, covering my body more and more to the point where I couldn't even enjoy my nude form when alone. Even with all the body positive work I had been doing with myself, it saddened me that I never once shot a selfie in which my breasts or vagina were exposed... even if it was just for myself. In a way, I was afraid to look. I was afraid to record my naked body out of fear of vulnerability, of being re-victimized, and of being humiliated somehow.

However, as soon as I started snapping the photos, something clicked. It felt good. I was having fun. I was even laughing. Photo after photo, click after click, I felt my fear and insecurities dissipate as though I were shedding skin. And, to be honest, I loved what I saw. Taking nude selfies prompted me to get over some residual feelings from my traumatic experiences, and helped me connect with and see my body in a new way.

5. It's A Great Ice Breaker

Your mini photo shoot might help you loosen up on your insecurities about your body as well as your fears in moving forward. I know I laughed a ton during my own, and was able to work up the courage to show my nude form to a room full of people at my friend's nude photo party.

Like trying a new face mask or yoga position, experimenting with stuff you've never experienced before can be invigorating. Even if taking nudes doesn't become your new favorite thing, it should definitely be a testament to the love you have for yourself and your ability to try something new or outside of your comfort zone.

And if you're already a master at the art of nudey-taking, then experiment with photographing yourself in different positions or putting the focus on parts of your body that could use some some more loving. Even if it's not something you necessarily want to do regularly, it's good to show your body affection in new ways, and bring attention to areas that need a little extra TLC.

Who cares what other people think about your nudes or the fact that you do or don't take them? Although nudes are often framed as being something to send to your crush, your lover, or your partner, they can be just for you as well. You deserve to take nudes for your eyes only. The act is often enough to promote a ton of self-loving feels.

If displaying them or showing them to someone else is something that you think might feel great, then by all means go for that as well. Based on my own experiences, I can confirm that sharing your nudes with others — even those you're not sexually intimate with — is hugely liberating.

More like this
What’s The Kibbe Body Type Test That’s All Over TikTok?
By Marilyn La Jeunesse
How Sunnies Face Is Championing Filipino Beauty
By Kristin Corpuz
How This Founder Manifested Ariana Grande As A Brand Ambassador
By Dominique Norman
Target Dropped *Two* New Fashion Collabs With Queer-Owned Brands
By Dominique Norman
Get Even More From Bustle — Sign Up For The Newsletter