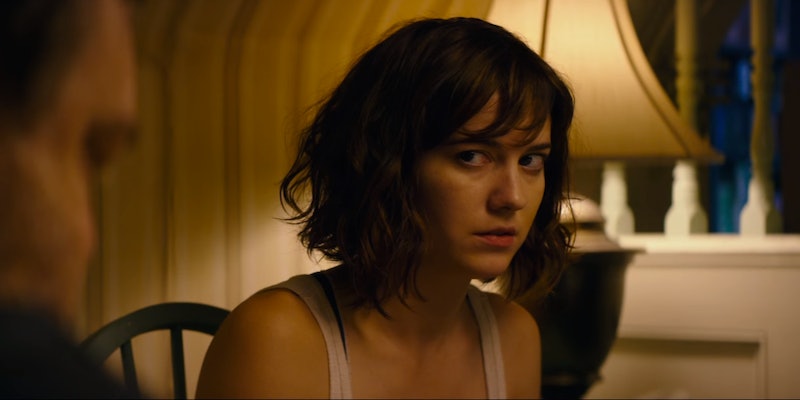 When J.J. Abrams and director Dan Trachtenberg approached Mary Elizabeth Winstead for the lead role in 10 Cloverfield Lane , she was sent a top secret link to the script that would delete after one viewing. But one viewing was all the actor needed to accept a meeting, and later, the part. It wasn't because she wanted the chance to be a part of a franchise — at the time, the movie wasn't called 10 Cloverfield Lane, or even at all connected to 2008's Cloverfield — although that certainly wouldn't have hurt; as she tells Bustle, Winstead came to the film largely because the script offered her a role rarely seen in Hollywood, specifically in the horror/action genre: a real, complicated, realistically flawed woman.

"Female characters are usually either so strong that they don't have any weaknesses ...or they're a total mess," the actor says. In this film, however, her character, Michelle, is "tough and strong and battling herself through this situation, and at the same time she is a woman and she has moments where she cries."

As fans saw in Cloverfield Lane's trailers, Winstead's Michelle is a young woman who wakes up after a car accident in a locked cell, chained to the wall, alone. Trapped in a bunker and told that everybody in the outside world is dead, Michelle is, quite literally, the final girl. A trope commonly found in the horror genre, the final girl is the last person alive, a virginal, pure innocent who, usually by chance, is the only person who survives the slasher's attack or the apocalyptic event. Given that Michelle begins Cloverfield as the final girl, one might expect that there will be a man who helps rescue her from her literal dungeon, or that she'll have to teach herself how to fight back in order to escape her captor, Howard (John Goodman). Yet 10 Cloverfield Lane does neither. Instead, from the moment Michelle gains consciousness, she thinks of how to get herself out, using her wit and strength to create diversions and give her an advantage over her captors.

"Even though she's put in a position of distress, she's strong from the get go," Winstead says of her character. "She's not just sort of sitting around, waiting for someone to come in and save her."

Not only is Michelle far from a damsel in distress, she also isn't over-sexualized, despite the fact that she wakes up in her cell in her underwear and spends a majority of the film living in a bunker with two adult men. Winstead says that not having Michelle's sexuality be her most defining part was something she made sure was the case before committing to the project, and in her first meeting with Abrams and Trachtenberg, her "main question" revolved around the filmmakers' handling of the threat of sexual violence. The actor worked to ensure that every scene involving nudity, including a shower scene that was later cut from the film, had a purpose — and, most importantly, that Michelle's story wasn't portrayed "from the male gaze." Luckily, Trachtenberg was in complete agreement, and Winstead credits the director for creating such a strong female character and feminist film.

"When I watch it, I don't feel like it's the typical horror movie, girl in distress," she says. "I feel like you see this strong girl who happens to be in booty shorts, but it's because she's got this creepy knee brace on, and you want her to feel the confusion as to what the hell is going on... In someone else's hands, that could have gone a whole other way."

Playing a well-rounded character like Michelle was a unique and welcome experience for Winstead, who describes the female characters she typically sees as being unrealistically strong or "a total mess." But taking on the part of Michelle wasn't all roses; the role required quite a bit of stunt work, as Michelle fights for her freedom, and, while the character is, without a doubt, a badass female heroine, she's no superhero. "I ended up with a lot of bumps and bruises that I wouldn't have on other films because I was just trying to play it very real," Winstead explains.

10 Cloverfield Lane is a hard movie to categorize: it has elements of a monster movie, an action film, and a suspense-filled thriller, among others. However, in a world in which female fans are still lacking a Black Widow movie, I'd propose that 10 Cloverfield Lane is none of those things. Instead, thanks to Winstead's Michelle, it might just be the first modern female superhero movie.

More like this
The 'Spiderhead' Movie Ending Is Nothing Like The Short Story It’s Based On
By Morgan Leigh Davies
16 Novels That Paint A Realistic Portrait Of Abortion
By K.W. Colyard
At 14, Jenny Han Wrote Rom-Coms About Her Friends & Fan Mail To Leo DiCaprio
By Alyssa Lapid
10 Must-Read New Books Out This Week
By K.W. Colyard
Get Even More From Bustle — Sign Up For The Newsletter