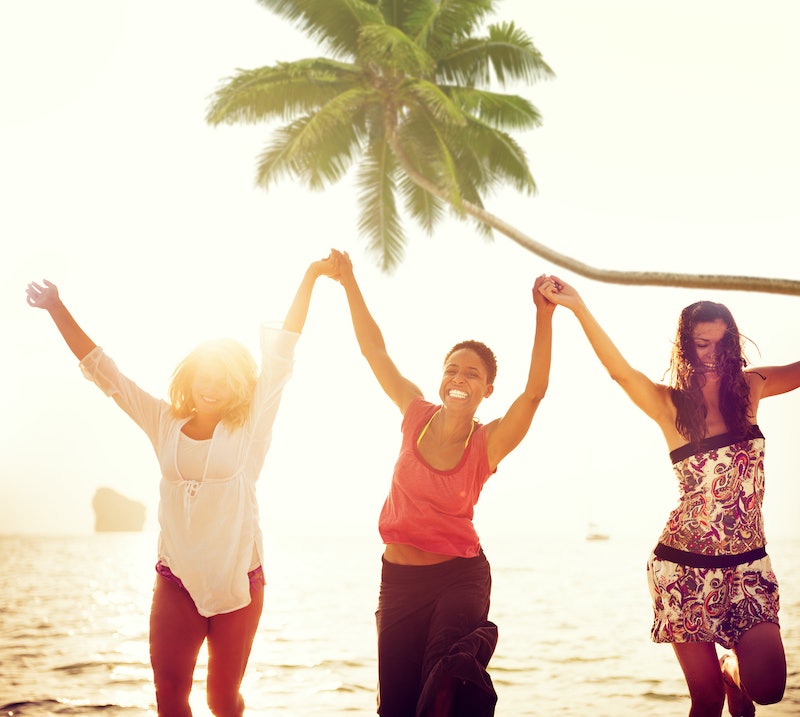 This year, Tuesday, March 8 marks the 105th yearly celebration of International Women’s Day (IWD) — a day dedicated to honoring the cultural, economic, political, and social achievements of the amazing women all over the world, while still recognizing the need for freedom, better opportunities, more resources, and greater equality for women in countries where gender discrimination is still widely practiced. And one of the many great way to participate is by reading some books about women, to celebrate International Women’s Day — amirite?

Since 1911, when more than a million men and women gathered together to honor IWD in Austria, Denmark, Germany, and Switzerland, people from all over the world have marked International Women’s Day with marches and strikes, conferences and rallies, campaigns and fundraisers — and nowadays, taking to social media to express their thoughts, feelings, and experiences with the hashtags #InternationalWomensDay and #PledgeForParity. If you want to get involved (and you totally know you do) head over to the International Women’s Day website, or see if your own favorite women’s nonprofit is organizing an event in honor of IWD. And while you’re at it, be sure to check out some of the great books on this list.

Here are 15 books to read for International Women’s Day. In solidarity.

1. Half the Sky: Turning Oppression into Opportunity for Women Worldwide by Nicholas D. Kristof and Sheryl WuDunn

Calling everyone, everywhere, to action in defense of girls and women being oppressed around the world, Sheryl WuDunn and Nicholas D. Kristof’s award-winning book Half the Sky: Turning Oppression into Opportunity for Women Worldwide is an International Women’s Day must-read. In it, the husband-and-wife team tell stories of women all over the world — from the struggles of childbirth without the aid of modern medicine, to the challenges of getting clean water every day, to the experiences of women working in the sex industry, WuDunn and Kristof share not only stories of struggle, but stories of resilience, hope, and strength — stories that show giving just little of your own time and energy in advocacy for women can go a long way.

2. When Everything Changed: The Amazing Journey of American Women from 1960 to the Present by Gail Collins

The day-to-day lives of American women have transformed significantly since the 1960s — at least in some ways. Combining a mix of oral history with Gail Collins’s own journalistic research, When Everything Changed: The Amazing Journey of American Women from 1960 to the Present covers major transformational events from the invention of the birth control pill to the increased inclusion of women into male-dominated fields like medicine, engineering, and law. It's the last 50-plus years of American history, as experienced by women.

While some women love racking up those passport stamps, others are traveling around the world for a much different reason — because it’s one of the only ways to make a living, improve their lives, and support their families living a world away. Global Woman: Nannies, Maids, and Sex Workers in the New Economy focuses specifically on the female childcare workers, housekeepers, and sex workers who travel to the United States from all over the world to take jobs they hope will afford them better lives, and shares a glimpse into the lives they begin to build when they get here.

4. We Should All Be Feminists by Chimamanda Ngozi Adichie

If you haven’t YouTubed Chimamanda Ngozi Adichie’s TED Talk about feminism yet, then International Women’s Day is definitely a great time to do so. And while you’re at it, check out We Should All Be Feminists — adapted from that very talk. The Nigerian-born author and outspoken supporter of women everywhere doesn’t hold back — her thoughts, or her well-placed humor — when writing about the discrimination and marginalization of women all over the world, and the strength it takes to celebrate your own womanhood in a world of unequal sexual politics.

If you’ve ever struggled with the question of how being a feminist in the United States will benefit, for example, a female victim of gender violence in the Middle East — or if it even will at all — then Chandra Talpade Mohanty’s Feminism without Borders: Decolonizing Theory, Practicing Solidarity is the book for you. Exploring feminist theory alongside every day applications of feminist action, Mohanty both critiques and calls to action feminists around the world, expanding the definition of feminism and advocating for a feminism without borders — like the title suggests.

6. Until We Are Free: My Fight for Human Rights in Iran by Shirin Ebadi

Shirin Ebadi was the first Muslim woman to receive the Nobel Peace Prize, and she did so for her work as a human rights lawyer, defending women and children oppressed by the violent regime in the Islamic Republic of Iran. But when the government turned against her — literally stripping her of her home, her marriage, her friends, her career, and finally her Nobel Prize — she was forced to live in exile in the U.K. But, as readers will learn in Until We Are Free: My Fight for Human Rights in Iran , she has never stopped working to defend the rights of women in her homeland.

If Rigoberta Menchú is a name you vaguely remember from the high school Spanish course you took about ten years ago, then it’s definitely time for a refresher. I, Rigoberta Menchú: An Indian Woman in Guatemala is the story of the Nobel Peace Prize-winning Rigoberta Menchú, a Guatemalan woman who has dedicated her life to standing up for the rights of Guatemala’s indigenous people, especially in the wake of the Guatemalan Civil War.

The award-winning and bestselling Wild Swans: Three Daughters of China tells the story of 20th century China — from the centuries-long Manchu Empire that fell at the beginning of the 20th century, to Chairman Mao’s founding of the People’s Republic of China, to the 1966 Chinese Cultural Revolution — as experienced by three generations of women: author Jung Chang’s grandmother, mother, and herself.

9. The Ways of My Grandmothers by Beverly Hungry Wolf

The influences of indigenous traditions are rapidly fading all over the world — which is why we’re grateful for writers like Beverly Hungry Wolf, whose work aims to preserve native traditions, chronicle tribal history, and honor indigenous ways of living in the modern world. The Ways of My Grandmothers is a book that does just that; it's a collection of history, legends, myths, and wisdom of the Blackfoot Indians, as passed down through generations of tribal women.

10. Mighty Be Our Powers: How Sisterhood, Prayer, and Sex Changed a Nation at War by Leymah Gbowee

Growing up during Liberia’s civil war, Leymah Gbowee watched her family, her friends, and her community become torn apart by the violence and fear that shadowed their daily lives. As she grew from a young girl to a young mother brutalized by domestic violence, Gbowee realized the profound differences between the ways men and women experience war and violence. Mighty Be Our Powers: How Sisterhood, Prayer, and Sex Changed a Nation at War tells the story of Gbowee’s inspiration, as she began working to bring Liberian’s women together, and together they participated in public protest, sex strikes, and prayer — all of which ultimately helped bring peace to the country.

11. Let Me Speak! Testimony of Domitila, a Woman of the Bolivian Mines by Domitila B. De Chungara

As the wife of a Bolivian tin miner, Domitila B. De Chungara couldn’t help but speak out against the injustices — political, economic, social, and in workplace conditions — faced by Bolivia’s laborers and working class. As a result, she united the wives of other tin miners, who worked together to bring attention to these injustices, and the exploitation committed by capitalist economics. Let Me Speak! Testimony of Domitila, a Woman of the Bolivian Mines contains accounts of daily life in these Bolivian lives, alongside Chungara’s own testimony.

12. Washing the Dust From Our Hearts edited by The Afghan Women's Writing Project

This bilingual — both English and Dari — collection of poetry and prose written by Afghan women will leave an indelible imprint on your mind and heart. Writing about everything from gender violence, to the desire to attend school, to the experience of living within the burqa, to the power of simply speaking truth to their own experiences, the women whose voices are celebrated in Washing the Dust From Our Hearts have often risked their lives just by putting pen to paper.

13. Inside This Place, Not of It: Narratives from Women's Prisons edited by Ayelet Waldman and Robin Levi

Some of the most invisible women in the world come not from underdeveloped countries or war-torn villages, but from places that are perhaps only a few miles away from where you live in the United States — they are the women who are incarcerated in U.S. prisons. Inside This Place, Not of It: Narratives from Women's Prisons is a collection of narratives from women living behind bars — from the violence experienced by women living in jail, to stories of women who were misdiagnosed by prison doctors and received inadequate or unnecessary medical procedures, to the experiences of women struggling to rebuild their lives beyond incarceration, the narratives shared in this book are largely forgotten and immensely important.

14. War Is Not Over When It's Over: Women and the Consequences of Conflict by Ann Jones

When Ann Jones traveled through Africa and to the Middle East, helping the International Rescue Committee aid women in sharing the realities of the lives in these war-torn corners of the globe, she quickly learned that even after armies have put down their weapons, the shadows of war remain — especially for a country’s most vulnerable citizens: women and children. War Is Not Over When It's Over: Women and the Consequences of Conflict tells the stories of women and children for whom the effects of violent conflict often last a lifetime.

15. Reading Women: How the Great Books of Feminism Changed My Life by Stephanie Staal

From stay-at-home mom to Barnard college student (in that order) Stephanie Staal found herself rereading the feminist lit of her undergraduate college days with a whole new perspective — one that much more closely identified with the women on the page than her college-aged self had a decade before. Reading Women: How the Great Books of Feminism Changed My Life is the story of Staal’s journey not only back to school, but into a fuller expression of her beautiful, feminist self — all through the power of feminist literature. See, books really do make a difference.