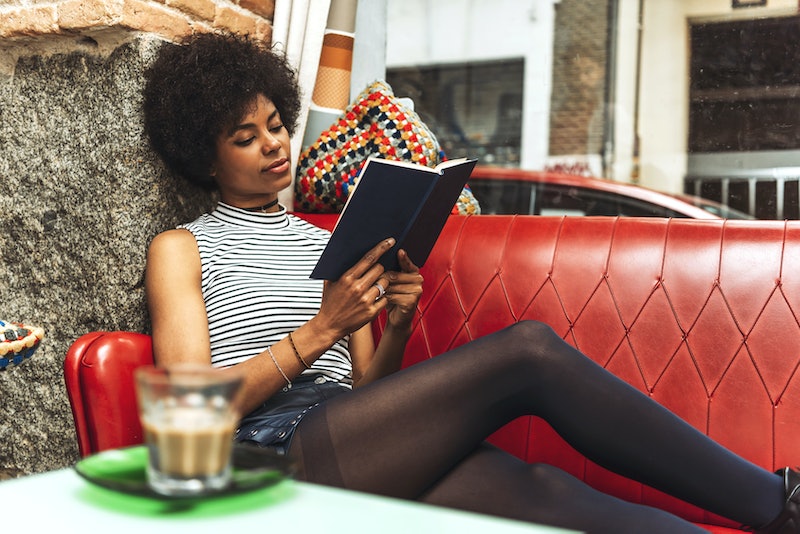 Sunday is International Women's Day and you're so excited! Or you have no idea what I'm talking about. Basically, today is the world's chance to tell its women that they're fantastic. Some nations have women's marches and group cheering. In other, sexier nations, mustachioed men buy their donnas, femmes, and mujeres fiori, fleurs, and flores. (In case you were wondering, March 9 is not International Get Back to Work, Women, and Shut Up About Feminism for the Rest of the Year Day. At least, not officially.)

It's been a big year for feminism. The Pakistani activist Malala Yousafzai won the Nobel Peace Prize for her work promoting education for women and girls. Sweden created a pronoun that isn't about gender (hell yes it's hen). Great Britain's (or perhaps I should say Hogwarts') Emma Watson brought her own brand of feminism to the U.N. And in America, we earned equal representation in congress with 20 female senators and 84 congresswomen! (It's a denial thing I'm trying. My doctor is afraid I'm going to give myself an aneurysm. Please do not mention cat-calling or #notallmen in my presence.) So yeah, women's issues are all taken care of and we only need one day out of the year to think about women at all.

Wouldn't that be nice?

If like me, you're not much of an event person and receiving flowers makes you feel awkward. So you should take International Women's Day to find out more about what it's like to be a woman in this international world we share. Because, just because America is Number One in American patriotism, doesn't mean women here have it all figured out. Remember what our first female president said. Oh, wait, that has never happened.

Here are just 12 novels from women around the globe. Each examines what being a woman means in her particular part of it.

Naphthalene: A Novel of Baghdad by Alia Mamdouh

This is the first novel by an Iraqi female novelist to be published in English — and it didn't happen until 2013. As you'll find out when you read Naphthalene, it isn't because Iraqi female novelists lack interesting things to write about. This is the novel of a young girl in 1950s Baghdad who is trying to form some form of self in a city of women who are lost and unfulfilled. Baghdad appears as a place where women are pushed into private quarters, yet those quarters are rife with adventure, emotion and meaning. This is a novel for anyone who mistakenly believes that hijab hide women who are weak of will.

Pig Tales: A Novel of Lust and Transformation by Marie Darrieussecq

There is a dark side to life for the fabulous femmes françaises, or at least, that's what Marie Darrieussecq would like us to know. In a nation that prioritizes the art of femininity, how does a woman stop her life from becoming an endless beauty regime? How does she not become an object of carnal desire? She doesn't, says Darrieussecq. She will turn herself into a pig. Literally. This book is about how it happens.

The women in Aminatta Forna's Ancestor Stones are people of will in search of direction. This novel tells the story of the wives and daughters of Gibril, a rich landowner in Sierra Leone. Their lives are dictated by their closeness to the patriarch. But when civil war strikes and the missionaries begin seeping in, the foundations of their society topple. Suddenly their is opportunity, but also great loss. Polygamy wasn't a perfect structure, but it was theirs. Is its destruction worth the breaking of the bind between mothers and daughters? The novel isn't so sure.

The Curse of Eve and Other Stories by Liliana Blum

The Thing Around Your Neck by Chimamanda Ngozi Adichie

Chimamanda Ngozi Adichie has that rare gift of expressing a palpable anger without sacrificing her poise. In "Jumping Monkey Hill," the most biographical short story in this collection, a Nigerian female fiction writer named Ujunwa attends a workshop lead by a older, British magazine editor. He ogles her breasts, he makes lurid comments to other women in the workshop, he tells her that her story about a woman being pawned to a business man would never happen in Nigeria, where women have rights. In a moment of calm, Ujunwa turns to another young woman writer to whom the editor just confessed he had dreamed of her naked body. The woman is calm, but Ujunwa is upset; "'But why do we say nothing?' Ujunwa asked. She raised her voice and looked at the others. 'Why do we always say nothing?'

It turns out that the melancholy of the Suburban housewife is universal. Zoya Pirzad made waves with this, her first novel. Her fans love her because she writes the way people talk and leaves poetry to the poets. And it allows her to take an honest look at the Irani women who make sandwiches, raise children, and never stop wondering about what they might have been.

Arundati Roy recreates a world where people are caged by their strata in a society that has begun to rot. And no one will be spared by the decay. Ayemenem, the toxic wasteland in southern India that houses the novel’s action, is a place where the incompetent are empowered because of their sex and the workers are labeled untouchable. It’s a world where women are bound to the men in their lives, regardless of his cruelty or stupidity and regardless of her own intelligence. And no one, not even the innocent, gets out of Ayemenem untarnished.

German phenom Judith Hermann is known for the ethereal presence of her heroines and the moody tone of her prose. The leading ladies drift in and out of the story, doing the work of plot as opposed to that of a protagonist. In Alice, a woman ties together the stories of grief. Alice’s freedom to move within the narrative and her power to drive the plot suggest a feminine authority I rather like. Let’s all up and move to Berlin.

In Maya’s Notebook a young woman hides from her American enemies and addictions in a rural village on the coast of Chile. This book is as much about being an American woman as it is as about being Chilean — in the United States, she was the victim of a youth-obsessed culture that finds women disposable. In Chile she finds a home. It is a place with its own sordid past, but a place that is healing, and so a place to find hope.

Before Beauty dies of AIDS, she begs her friends to take care of themselves, and to do something. Her husband was promiscuous and they had unprotected sex. Beauty's plea is that the women find a way to protect themselves. This book is an important reminder that AIDS has not been beaten or maintained. For women between the ages of 15 and 44, it's the number one killer, worldwide.

Sirena Selana was once a young boy scrounging through the alleyways of San Juan. But when an established drag queen takes and transforms Sirena, she becomes one of the most desired women in the Caribbean. But as she idolized and placed on a pedestal, she cannot help but wonder if she has become a woman or just a doll.

The Time of Women by Elena Chizhova

The time of women was not a happy time in the Soviet Union. After the revolution, the nation was carried on the backs of the women who slaved away in factories, waited hours in line, feared the state and hid the truth. This is the story of a young girl who, just as communism has grabbed hold of Mother Russia, is taken in and protected by a group of women. The question of this novel is whether a woman can be strong and remain human. The answer is an unqualified yes.

More like this
25 Inspiring Quotes From Black Women To Celebrate Black History Month
By Kyli Rodriguez-Cayro and JR Thorpe
10 Equally Romantic & Heartbreaking Books From British & Irish Authors
By Shahed Ezaydi
Jessica Simpson On The Time She Was Pursued By A Backstreet Boy & An *NSYNC Member
By The Editors
Netflix Shut Down 'Bridgerton' S3 Rumours About A “Very Dark” Storyline
By Bustle
Get Even More From Bustle — Sign Up For The Newsletter
From hair trends to relationship advice, our daily newsletter has everything you need to sound like a person who’s on TikTok, even if you aren’t.