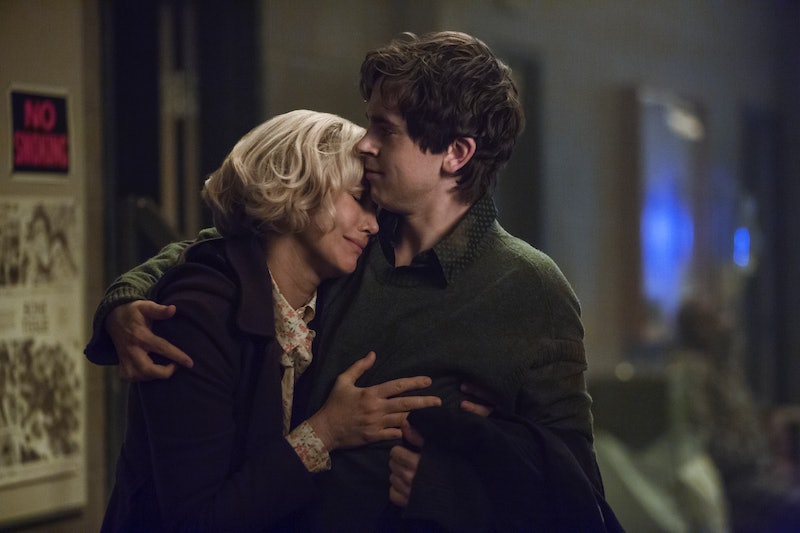 It's been a long time coming, but it looks as though Norman may finally get institutionalized in Bates Motel Season 4. After years of watching Norma explain away Norman's psychotic issues, Monday night's premiere episode of "A Danger to Himself and Others" showed Norma finally accepting that her son needs some serious help. (And to think it only took a few murders in order for it to happen!) But don't expect Norman to take this change of heart lightly. Based on how jumpy he got in the kitchen when Norma broached the idea, I'd say surrendering him to the mercy of doctors might be the very thing that puts this character over the edge. I mean, look at his response to just being locked in his room. Can you imagine him in a place that isn't even his home?

Back in Season 3, Norman pleaded with his mother to take him somewhere for help. He knew something was wrong and that he wouldn't be able to stop himself. He was self aware of his problems in the end. However, I fear as though we've now officially passed the point of no return. His hallucinations are stronger and happening much more frequently than ever before, which, to me, indicates that time has run out. She waited too long to get him help and now everyone will have to deal with the consequences.

That being said, this isn't a problem that's just going to go away. In fact, if Norma doesn't find a doctor to treat Norman, he's going to be forced to go back to the county mental ward and resume treatment there. And given that the place looked like something out of a Saw movie, I'd say that would only make things worse. If Norma wants any chance of rectifying her mistake of negligence, then she needs to get him a real doctor and fast. Just don't expect Mother to approve.

More like this
'Succession' Season 4 Could Be The Show’s Last
By Kadin Burnett and Gabrielle Bondi
At 14, Kate Berlant Had A Wheelie Backpack & One Line In 'Lizzie McGuire'
By Samantha Rollins
Everything To Know About The Bear Season 2
By Brad Witter
What’s New On Netflix: 'Stranger Things' & 'Mean Girls'
By Arya Roshanian
Get Even More From Bustle — Sign Up For The Newsletter