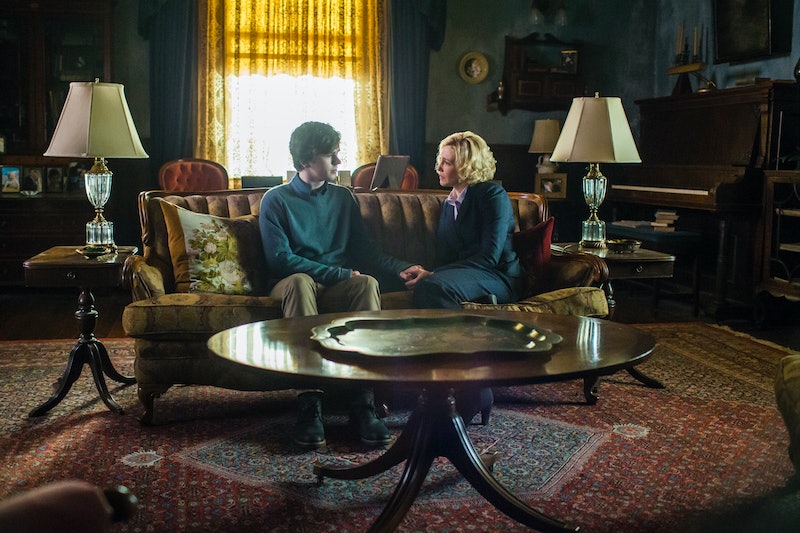 One of the great things about Bates Motel is, even though we know how this all ends (with Norman becoming Hitchcock's legendary Psycho killer), the show still manages to unleash its fair share of surprises. So as we gear up for the Season 3 finale, I can't help but immediately look to the future to try and predict what Bates Motel Season 4 will have in store. Creators Carlton Cuse and Kerry Ehrin have made it well known that they plan to have this beloved thriller last a total of five seasons, and while A&E has yet to announce the show's official renewal, we all know it's going to happen. (Mother simply wouldn't tolerate anything less.)

Granted, it's hard to predict the exact trajectory of Season 4, given that we don't yet know how Season 3 will end. (All that will be revealed in a few hours' time, my friends.) But rest assured it's bound to be chock-full of crazy — or should I say psycho — plot twists as Norman and Norma's unhealthy relationship continues to evolve in new and terrifying ways. So as we wait with baited breath for another season pick-up, allow me to shower you with my own predictions of what's to come. (Sorry, Mother. I just couldn't help myself.)

Too long have these two danced around their feelings for one another. Though we've had a few close calls and heartfelt moments this season, I think next year will be the one that finally sees these characters seal the deal, if you know what I mean. Let's just hope Norman doesn't find out — for Romero's sake.

Please trust me when I say that I hate this thought more than anyone. Dylan is by far one of my most favorite characters and I love the romance that seems to be building between him and Emma. However, we can't forget that this is Norman's story. Those who have seen the movie know what ends up happening to Norma eventually. So it'd be naive to think that Dylan may not share a similar fate, especially given how jealous Norman can get of his mother's firstborn son. This would be the easiest way for Norman to get her all to himself once and for all.

As Norman's hallucinations continue to grow in strength and in number, I wouldn't be surprised if that means we'll end up seeing less of the real Norma we've come to know and more of the one Norman has created in his head during his many blackouts. That is, until he completely morphs into her personality altogether.

Emma Will Get Cured

Something positive has to come out of all this darkness, right? Hopefully that will involve Emma's surgery, which Dylan has worked so hard to see happen. Plus, considering how distracted both Norman and Norma are these days, someone sane has to run the motel. So they might as well make her healthy. This girl deserves a big win.

During a recent interview with TVGuide.com, Ehrin teased that "people should be very worried" about Bradley's safety now that she's back in town and on Norman's radar. For all we know, her death could even happen by the end of Monday night's finale. Either way, it will be yet another dark deed Norman will be forced to grapple with moving forward. Though covering up the crime should be considerably easier, given that most people already think she's dead.

Because, duh. It just wouldn't be a true Psycho experience without them. Maintaining personal hygiene has never felt more terrifying.