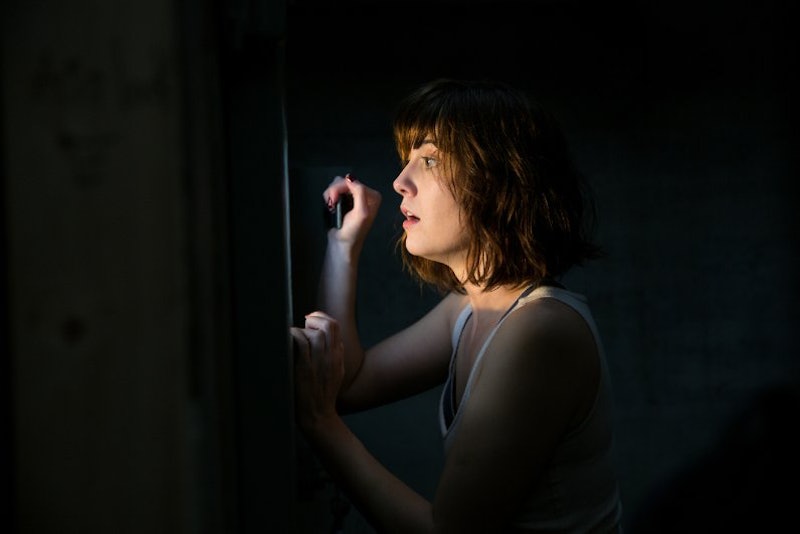 When the movie Cloverfield came out in 2008, a lot of theater-goers didn't know what to expect. The film's marketing was decidedly vague, but a few things were evident: It was a found footage horror film that depicted New York City being destroyed by some kind of giant monster. Once the film screened, viewers got a good look at the monster without ever really learning where it came from, but it was pretty easily categorized as being in the style of a classic Japanese Kaiju; like Godzilla. But now with the film's pseudo-sequel, 10 Cloverfield Lane , being even stingier with the details than its predecessor, fans are extremely curious about what kind of monster is in 10 Cloverfield Lane.

From the movie's trailers, it isn't even clear if 10 Cloverfield Lane has any monsters in it at all. The focus seems to be on the three human characters in the film who are at odds over being trapped in a bunker together, with the threat of some unknown presence outside the bunker that could potentially kill them. While this premise has lead some fans to believe that the only monsters in the film are the humans themselves, producer J.J. Abrams admitted to EW that the movie does feature an actual monster, and that monster is "not of this natural Earth". However, he also stipulates that it's not the same monster from Cloverfield, nor is it what he thinks fans are expecting. So what is it?

As I already stated, most of the theories surrounding the new film think that "monster" is being thrown around metaphorically, and that the only monsters in the movie are human ones. The trailers definitely look like John Goodman's crazy doomsday-prepper character is the bad guy, but viewers could certainly have the rug pulled out from under them by seeing the apparent protagonist, played by Mary Elizabeth Winstead, instead become the "monster". And let's not forget that there's a third person, played by Matt Vairo, whose lack of lines and scenes in the trailers could be hiding his true monstrous nature.

But operating under the belief that the film's "monsters" are really just people is ignoring what Abrams has said about the movie having a literal, other-worldly monster. He doesn't seem to be mincing his words when he says that, so I have to believe that there is some kind of actual monster besides the people. Something else to consider is that this movie wasn't always related to Cloverfield. It was originally called The Cellar, and then code-named Valencia, and the threat outside the bunker was said to be caused by a chemical attack. So if that detail remains unchanged, there are still a couple of ways that plot might relate back to the original Cloverfield.

One way the movie could connect is that the chemical attack was used by the military against the original Cloverfield monster. The effect could be that it killed the monster, but also killed the populace, or, wait for it, turned them into zombies. Personally, I think Abrams is too creative to go to the severely-drained zombie well, but it would fit the criteria of actual monsters. Another option is that the parasitic monsters from the original Cloverfield infected and killed the human population, which was something they were shown capable of in that movie. And although that would explain how mankind died off, it still leaves the movie without an actual monster; or at least one that fans didn't see in the first movie.

The next possibility is a little out there, but it's possible that the film features aliens. The trailer shows strange lights in the sky illuminating the farm house; lights which definitely have an alien feel to them. There's also something large enough outside the bunker to effectively cause an earthquake, and since Abrams has said this isn't another Kaiju film, the only otherworldly thing I can think of is an alien spacecraft. But if the monsters are aliens, how would they relate to Cloverfield? Maybe they come to Earth to stop the monster? To reclaim him? I really don't know.

And that's part of the fun of this movie. No one knows what the monster is, so fans can continue to speculate until the film premieres. As for me, I'm going with aliens. Gotta be aliens.