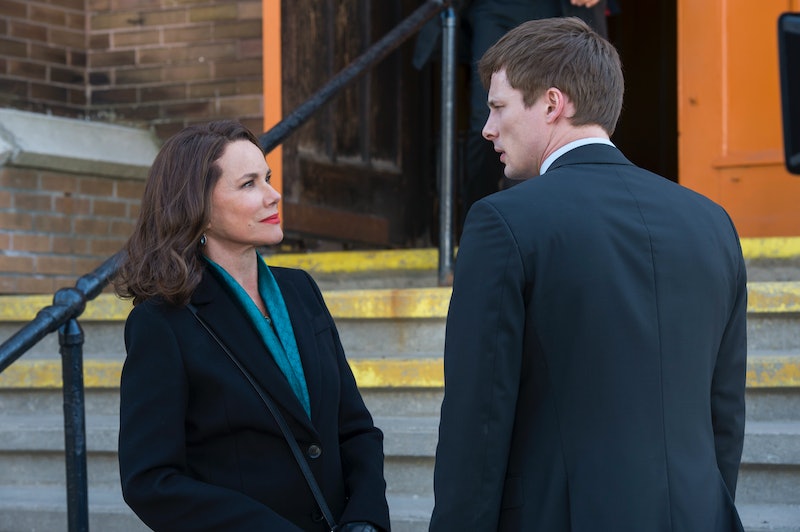 You might think Damien is just another television series being adapted for the small screen from a classic movie, but the new A&E series is actually a continuation of 1976's The Omen . The show picks up with Damien as an adult — on his 30th birthday to be exact — as he begins his transition into the evil Antichrist. However, in this biblical game, one player introduced in the first episode doesn't have very clear intentions. So, who is Ann Rutledge on Damien and whose side is she on?

Ann introduces herself to Damien when he's visiting an old school friend and she proceeds to tell him that not only did she know his father — and last saw Damien at his father's funeral — but she's been keeping watch over him throughout his entire life. Damien is justifiably freaked out by the interaction and we don't see Ann again for the rest of the episode. But, something tells me that isn't the last we'll see of the tricky Ann Rutledge. In fact, Ann is listed as one of the main characters in Damien, so she must play a much bigger role in Damien's journey than we're led to believe in the premiere.

Still, the question remains: whose side is Ann on? According to the actress herself, Barbara Hershey, Ann wants to help Damien become the Antichrist. Hershey told iO9 that Ann is a human character (so she isn't literally the devil on Damien's shoulder) and said, "She’s been in the shadows, guiding the situation and protecting him from all of these elements that want to destroy him, or absorb him. There are a lot of forces at play." Hershey went on to say, though, that the Antichrist isn't necessarily evil — so maybe Ann isn't evil either!

From what I've seen in this premiere episode of Damien, the show certainly likes to play with the black-and-white concepts of good and evil, challenging us to think about what exactly those mean. Damien himself doesn't seem to be evil, even if he is the Antichrist, so it's possible that Ann's intentions of helping him figure out his destiny are good. But, you know what they say: "The road to hell is paved with good intentions." Something tells me Ann may be the physical embodiment of this proverb on Damien.