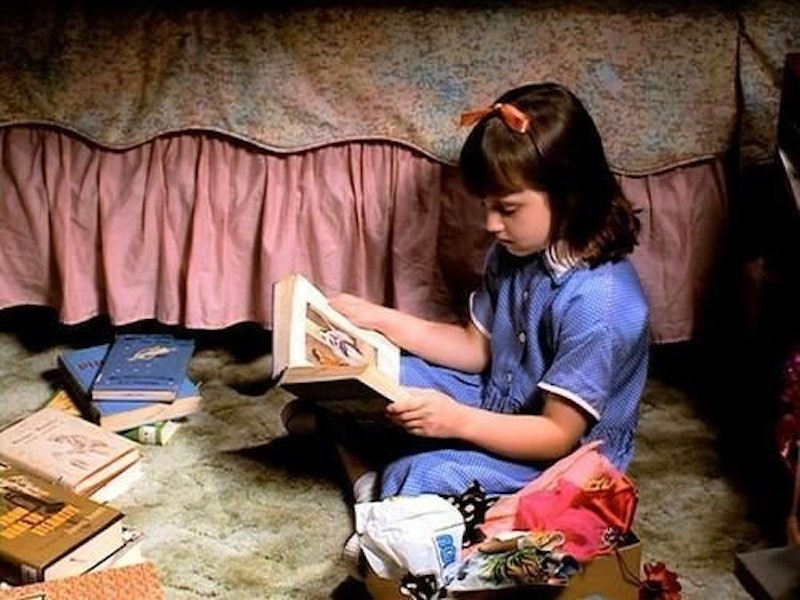 Remember back in the 9th grade, when you read The Catcher in the Rye and started incorporating ugly hats into your look? Or when you got your hair cut into that questionable bob just like Scout in To Kill a Mockingbird? Or when you made everyone in elementary school call you Hermione for a week? You know you were that kid once or twice. Everyone has at least one book character who heavily influenced them back in the day (although it can be a little embarrassing to look back on it now).

But even if you cringe when you think about the characters you used to obsess over (I can't be only one who once dressed up as an elf from The Hobbit to sing an improvised song for the third grade talent show), you know that those characters were a part of shaping your identity. Book characters can be as important as our real life friends (or enemies). They made an impression on you, from the most badass female protagonists to the lowliest comic relief side characters. And, unlike heroes in movies or Barbie dolls or your favorite band members, book characters existed in your own imagination. They could look however you wanted them too.

So, just in case you need a reminder, here are some of the book characters who might have shaped your identity:

Lizzie Bennet is an old school feminist hero. She's stubborn as hell, and she's going to marry for love and control her own destiny no matter how many nasty rich dudes propose to her (or at least, she's going to wait until those rich dudes prove that they're not quite as nasty as she thought). And of course, she has a keen intelligence and a sharp wit. She help all of us become the witty, judgmental, romantic people we are today.

2. Scout Finch, To Kill a Mockingbird

So-called tomboys everywhere loved Scout Finch. So-called girly girls everywhere loved Scout. She wasn't traditionally feminine, and she was a bright and enthusiastic reader — and she really did make that short haircut seem like a good idea. Above all, though, she had a strong sense of justice. Her idealism survived all the harsh realities she faced over the course of the book, and she inspired us to look more closely at the injustices that surround us.

A little girl who's so smart she develops telekinetic powers? Yes, please. Matilda never got quite as weird as some of Roald Dahl's other books (James and the Giant Peach, anyone?), but Matilda was still a wonderfully unique, whip-smart kid, struggling to be herself in a cruel, grown up world. And after reading Matilda, we all wasted hours of our lives trying to will various objects to move on their own (or was that just me?).

The Color Purple is not an easy read. The things that Celie and her sister Nettie go through are gut-wrenching, to say the least. Nevertheless, Celie is a character of incredible strength and love, who survives through multiple horrors and abusers. She learns to fight for herself despite having so few positive things to cling to, and (spoiler alert) it pays off in the end. She showed all of us that we don't have to be defined by our traumas, and that we are always capable of healing.

5. Holden Caulfield, The Catcher in the Rye

...and then, on the opposite end of the spectrum from "inspiring woman who survives through adversity," there's Holden Caulfield. OK, I know that Holden Caulfield had legitimate reasons to be a whiny, disaffected teen but... still. He did allow us all to wallow in our teen angst, though (it's necessary, sometimes), and to roll our eyes at all the phonies around us. And he taught us that ugly hats are an important stage of figuring out your identity, which is true.

Everyone's favorite Canadian redhead! Seriously, who doesn't love Anne from Anne of Green Gables? She's a plucky orphan with an overactive imagination, and she loves all things romantic. I know, she sounds like a bit of a cliche, but as a little girl, it was important to have an enthusiastic, "girly girl" role model mixed in there with all the tough tomboys. Because loving boy bands and puffed sleeves doesn't make you any less of an intelligent literary protagonist.

Obviously. Hermione Granger inspired a generation of kids to be insufferable know-it-alls, and we're all better for it. Really, though, Hermione had a huge impact: she was a female character with brains and wit, and she was almost terrifyingly unstoppable when she put her mind to it. She grew from an 11-year-old terrified of breaking the rules, to an activist and wizarding world savior. And she made us all want to be smarmy, well-read activists too.

8. Julie, Julie of The Wolves

Julie, or Miyax, is a girl with a will to survive. She's forced into an abusive marriage at age 13, so what does she do? Run away to the tundra and live with wolves, of course (OK, so that's not what she intends to do... but that's how it works out). Julie was a great character when it came to inspiring a love of nature in young readers (and she totally made you want to get a pet wolf). Her resilience and adaptability gave her readers confidence, whether they were facing arctic wolves or more mundane challenges.

I'll be honest: I wasn't the most mechanically minded kid in the world. But Violet Baudelaire made me (and many other young readers) excited about mechanical engineering. She was a creative inventor who nearly always kept it together to take care of her younger siblings, no matter how unfortunate their circumstances. She inspired girls to get excited about mechanics, and she inspired every kid to work hard at their own passion.

10. Alanna, The Song of the Lioness

And of course, there's Alanna. Where would any of us be without her? Alanna was a tough female knight (or knight-in-training) who fought for what she knew was right. She was the lady warrior who reminded all of us that anyone can be a sword-wielding heroine, if they have enough courage. And she inspired countless young readers to read more female-driven fantasy (and to rock the tunic-and-belt look). What more could you want out of a protagonist?