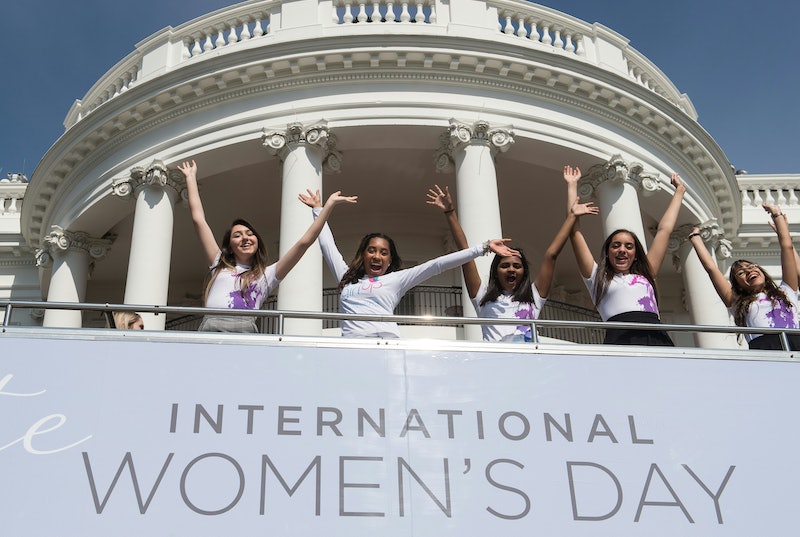 On March 8, otherwise known as International Women's Day, Twitter was barraged with complaints that there's no International Men's Day. Well, guess what? There is, and you can celebrate it on Nov. 19, if you so desire. But that's not the point today.

Men and women alike have achieved amazing feats. However, they're given separate days for a reason — though both sexes share some of the same struggles, women face inequalities that men simply don't. For example, women still aren't guaranteed equal wages in the United States, a country that's supposedly one of the most socially developed nations in the world. Today, women on average make 20 cents less per hour than a man does.

That said, why can't men's rights activists respect International Women's Rights Day for what it is? Why can't we honor women without suggesting that we must simultaneously honor the opposite sex? In a sense, the overwhelming outrage over the supposed lack of an International Men's Day is an example of the most backwards form of political correctness. Making International Women's Day about men is akin to Stacey Dash saying there shouldn't be a Black History Month because there's no White History Month. It just doesn't make sense.

My refusal to address International Men's Day on a day set aside for women doesn't imply that I don't acknowledge or appreciate men's accomplishments. Dissenters may claim that in order for men and women to truly be treated as equals, neither should receive special attention. I'm here to tell you that special attention for the sake of attention is not the point.

International Women's Day, instead, is meant to further awareness of the issues faced by women not just in America, but all around the world. After all, women weren't treated equally until men gave their consent, and in many countries around the world they still aren't. If that isn't a sign of inequality, I don't know what is.

American women didn't win the right to vote until 1920. Coincidentally, Tuesday is also voting day in several American states, where you'll be sure to witness both men and women alike filling out their ballots. If you believe our progressivism negates any reason for celebrating International Women's Day, keep in mind the fact that even the most basic of women's rights haven't been achieved on a worldwide scale. Saudi Arabian women, for example, weren't allowed to vote until 2015. And that's just one example.

Men aren't the problem in this equation. The feminist movement needs both men and women to equally participate if it's going to be successful. Instead, bigotry and a bruised sense of entitlement is the culprit — because International Women's Day has nothing to do with men. It's not cutting men down. It's not depreciating them. It's not taking their work for granted. It's about women — simple as that.

Sadly, the fact that International Men's Day has dominated the dialogue during International Women's Day is a sign that the definition and goals of feminism are still misunderstood by many. Feminists don't build walls or create unnecessary competition between men and women. They build bridges by raising awareness of the struggles unique to both.

More like this
Sandra Bullock, Girlboss Extraordinaire
By Matt Harkins & Viviana Olen
The 'Hocus Pocus' Sequel Finally Has A Release Date & It Makes Total Sense
By Shannon Barbour and Radhika Menon
How The City Healed Five Years On From The Manchester Arena Attack
By Ella Glover
'Unforgotten's Brand New Character Joins At A Pivotal Moment For S5
By Bustle UK
Get Even More From Bustle — Sign Up For The Newsletter