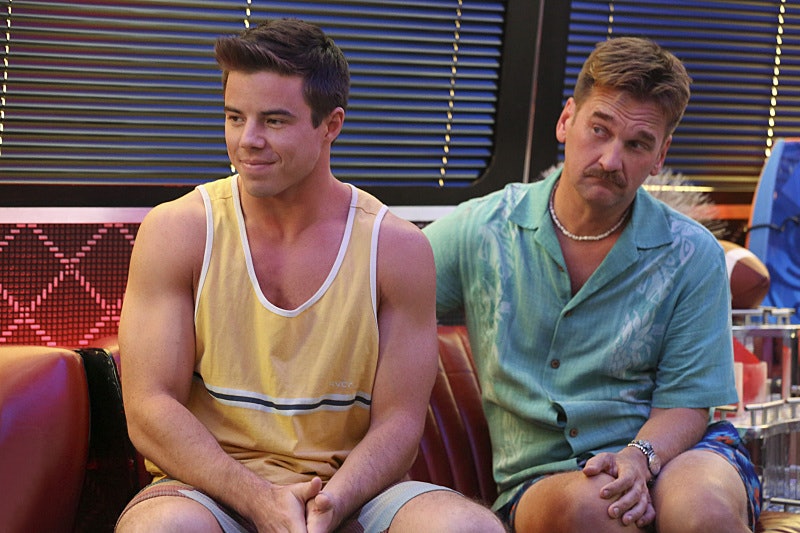 Darryl Whitefeather had a secret that he needed to share with his co-workers, and, since he's a character on the musical comedy Crazy Ex-Girlfriend , he decided to do so in song. Darryl wanted to announce he was bisexual, something he had discovered two episodes earlier, and figured what better way to share such big news than with a song perfectly titled "Getting Bi?" The Huey Lewis send-up, which sounds a lot like "Hip To Be Square," made it clear that it's hip to be bisexual. But, even better, the show made it clear that Darryl's song about bisexuality may be funny, but his actual bisexuality is something to take seriously.

Often, homosexuality and bisexuality on television and in movies isn't handled with care, but Crazy Ex-Girlfriend has treated Darryl's coming out with a delicacy that has made it feel real. Darryl's quest for sexual discovery is as important as any other romantic entanglement on the show, including whether protagonist Rebecca Bunch will end up with Josh Chan, the man she's traveled across the country for. Darryl's sexual awakening has been five episodes in the making, starting with his feelings for White Josh, a character that wasn't much of a character, just a good looking joke. (Josh Chan is Filipino, so his friend, also named Josh, needs a descriptor.) Darryl seems to have a crush on the guy he's seen at the gym, but like the audience, he's not really sure how to describe his feelings.

After White Josh, who we find out is gay but doesn't need to introduce himself that way (another win for the feminist, sex-positive Crazy Ex-Girlfriend' s handling of sexuality), gives Darryl a kiss on the lips, he starts to take his feelings more seriously, eventually discovering he likes women and men. Darryl then spent the next episode wanting to keep this discovery quiet, but, after White Josh makes it clear he's not interested in going back into the closet, Darryl decides he doesn't want to hide himself either. Hence, the song.

In an interview with Entertainment Weekly, actor Pete Gardner, talked about Darryl's sexuality and how he chose to address it from an acting point of view. “Honestly, I’ve just treated it as any other romantic storyline,” he says. “It’s just about falling in love, and that’s what’s so great about this show. It hasn’t been like one episode and all of a sudden, Darryl’s gay. It has been very slow.”

That choice to take things slow has made Darryl's discovery seem more realistic. It's also helped explain a lot about the character, who often seemed unsure of himself. His sexual discovery has made him seem more confident, like this was the answer he's been looking for all along to help him better know himself. Even better, it shows that being true to yourself can lead to great things, which is an important message for men out there, who don't often get a bisexual character whose sexuality isn't played for shock and awe. As Vulture pointed out, bisexuality in male characters is a power move that is used to help them get what they want. It's disingenuous and does little to further the discussion of male sexual identity.

What stands out about Darryl, besides his masterful Tom Selleck mustache, is the fact that his path to sexual discovery was always thoughtful and sincere. He never needed to really figure out why he's bisexual; he was just allowed to explore it. He doesn't need a reason or a motive to be bi. He also doesn't have to defend his choices, an important sentiment to any person who identifies their sexuality as something other than heterosexual.

In 2015, The Advocate reported that a new study found 31 percent of Americans under 30 would say they are not "100 percent heterosexual." This is a big discovery consider that, only five years ago, a scientific study proved bisexuality existed — surely, a surprise to anyone who had identified themselves that way before then. But, in real life as TV, bisexuality has often been treated as a fad, as a way to have your cake and eat it too, the stereotype being that these were men and women who were just closeted homosexuals, or just simply confused. Even Darryl's song addresses this idea, as he sings about bisexuality being "something I’d like to demystify. It’s not a phase, I’m not confused. Not indecisive."

The show didn't choose to treat Darryl's sexuality different from any other male character on the show — even his singing announcement didn't weird out his co-workers. (Though they did wonder why their boss had to call a meeting to do so.) And neither did the actor, who says he played it just as he would have if the love interest was a woman. "The great thing is, it didn’t have to be sanitized or made extra special because it’s a love story between two guys," Gardner said. "It’s just a love story, and love stories have bumps and mistakes and weird things [happen]."

When it comes to Darryl's budding relationship with White Josh, we can expect bumps, mistakes and weird things to happen, just like any other relationship. Darryl's sexuality doesn't change his humanity. It's something Crazy Ex-Girlfriend makes clear for anyone who possibly didn't already know, and that the show handles incredibly well.