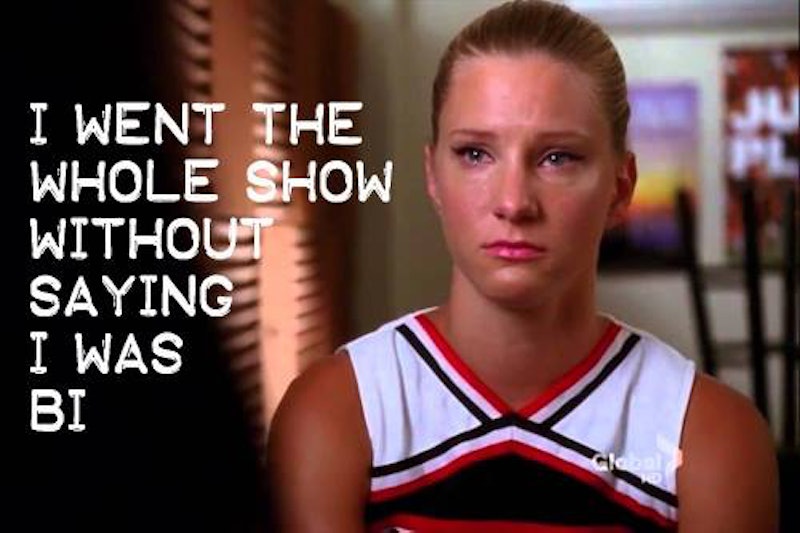 What do Buffy the Vampire Slayer's Willow, The L Word's Alice, and the title character of Constantine all have in common? If you're familiar with the concept of bi erasure, you know exactly where this is going: All three characters have clearly dated both men and women, but as author and activist Nicole Kristal's memes about bisexual TV characters hilariously point out, not a single one has used the word "bisexual" on screen. "I went the whole show without saying I was bi," reads one screengrab of Glee's Brittany, whose relationship with her fellow cheerleader Santana came to eclipse her sexuality — despite the fact that she dated men throughout the series as well.

To someone who doesn't live with the reality of bisexuality every day, this may seem like a trivial matter. Why focus on TV characters when bisexuals have the worst mental health in the LGBTQ community and face some of the most stigma? Furthermore, some bisexuals really do prefer not to use labels. However, anyone who has been part of a marginalized group understands the enormous power of representation, which can make or break a movement. "Labels are important because they create visibility and community, and they help dissolve shame," Kristal tells Bustle over email. "When you're a minority group who cannot see a positive representation of yourself on television or in films, it's damaging. It accounts for the horrific stats that have recently come out about bisexuals."

In an effort to draw attention to bisexual erasure and its effect on individuals, Kristal created the #StillBisexual campaign last January, which features bisexuals discussing their sexuality and dating history in confessional-style videos. "I thought if people could see our bisexual stories, they would finally start to believe that we exist," she tells Bustle. However, as much as the campaign has helped public perception of bisexuality, its depictions on TV and film remain frustratingly ambiguous.

"When bisexuality is depicted on television, it's often shown as a transitional stop on the road to gay town ...or as ambiguous and undefined," Kristal said. "Characters almost never say the b word, especially not in reference to themselves, and often times their sexuality is used as a plot twist rather than a permanent identity."

As a result, Kristal turned to creating memes featuring particularly frustrating characters: Buffy's Willow, Faking It's Amy, Constantine's, well, Constantine, and many, many more. Soon, people began sending requests her way, including Once Upon a Time 's Mulan (!!!!!).

With so many bisexual characters in one place, a particularly disturbing trend becomes apparent: That of the Evil Television Bisexual, as seen in How to Get Away with Murder's Annalise Keating and Mr. Robot's Tyrell Wellick. "Not only are these characters closeted, but they are also murderers... These characters have an easier time committing crimes than copping to their bisexuality," Kristal writes to Bustle. Queer-coding of villains is a complicated topic worth an entire article of its own (be sure to check out The Atlantic's excellent exploration of the subject), but the issue boils down to this: Sexual flexibility is often conflated with moral flexibility, as if a character's bisexuality is somehow connected to their life choices. And that's a problem.

As depressing as this all may seem, Kristal also made sure to point out shows that got it right, most notably, Callie from Grey's Anatomy and Brenna from Chasing Life.

However, when you compare portrayals of bisexuality, it's clear that the negatives far outweigh the positives.

"Imagine for a second a gay character on a TV show that refused to come out... or even reference his or her sexuality. That character would be seen as someone who was ashamed of themselves and had some deep-seated issues," Kristal explained. "Closeted bisexual characters on television should be seen the same way but they're not. They're seen as being aloof and above labels. So these characters end up perpetuating damaging bisexual stereotypes — that we don't know who we are, that we cheat on people, that we're indecisive or greedy or really gay."

Check out the rest of the images below, and follow Kristal's "The Bisexual's Guide to the Universe" on Facebook for updates.

More like this
'Heartstopper's Yasmin Finney Wants To Be The First Trans Bond Girl
By Sam Ramsden
What Is The Forest Personality Test? The TikTok Trend, Explained
By Georgina Lawton
40 Chic Outfits With Loose-Fitting Silhouettes That Look Good On Everyone
By Claire Epting
35 Mistakes You're Making If You're Trying To Save Money
By Rachel Bar-Gadda
Get Even More From Bustle — Sign Up For The Newsletter