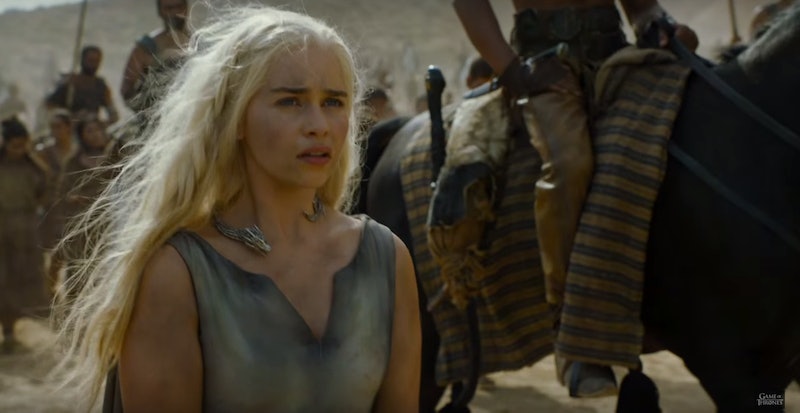 If you are at work right now, or in some other sort of public place, it might not be a good idea to watch the new Game of Thrones trailer for Season 6, because it is traditionally seen as insane to curl up into a ball while rocking back and forth sobbing. If you happen to be in that situation, but still really want to know what's going on, allow me to hook you up with these 11 spoilers from the Game of Thrones Season 6 trailer. Honestly, they're pretty rough, so maybe even the words and images will be hard for you. I suggest reading this in the bathroom or wearing sunglasses so no one can see the tears.

And let's be real here, if you want to preserve your sanity, maybe you just shouldn't watch this new season at all because it looks like it's going to be a rough time for all of our favorites. And a sexy time for some. But also mainly a rough time. Winter, if it has not arrived yet, is mostly surely coming soon in season 6 (premiere date April 24th!!!). Even the really beautiful music accompanying the trailer,“Wicked Game” performed by James Vincent McMorrow, couldn't save me from the devastation I felt with the first, second, all the watches really.

So without much further ado, here's what's going on.

1. Cersei And Jaime Are Back At It

"We're the only ones who matter, and everything they've taken from us we're going to take back and more," Jaime said to his sister-love. Uh oh. I don't trust that weird smile on her face either.

"The great victory I saw in the flames was a lie," she tearfully laments. Yikes. I mean we already knew that, after Ramsay took down everyone we know. But her remorse is something kinda new. And who exactly is lying to her? I knew we couldn't trust that Rh'llor guy.

3. Daario And Jorah Are On The Hunt

And Jorah found Dany's ring, plus he's super obsessed with her, so I have high hopes he will save the day. Dario can come too.

4. Things Don't Look So Hot For Our Khaleesi

Danaerys is walking dejectedly with the hugest Khalasar the Dothraki Sea has ever seen. But her hands aren't bound, and they let her keep her cool jewelry, so that's a plus, I guess.

5. The High Sparrow Is Ready To Take Down Royalty

"Every one of us is poor and powerless. And yet, together, we can overthrow an empire." Looks like somebody's tired of the royal families messing with the people of Westeros and is about to wreak some serious religious dude havoc.

Lancel tells Cersei to make Ser Robert Strong step aside, and she's like, "B*tch, please. You think we can't take you?"

With the cast of characters quickly edited in this portion of the trailer, what else can you expect?

8. Jaime And Cersei Are Back Together And Brienne Is Pissed About It

Or something else, but, regardless, she totally just killed that dude.

Or warging? Is she warging?

But he doesn't seem to happy about it. Probably because he's chilling with the Night's King. Or maybe because he is able to see all the violence and fighting that's going down with those previously pictured fighting hordes? That's kinda how it's edited to look, I think.

11. Jon Snow Is Probably Not Dead

Throughout the trailer, there are just a bunch of images of him lying down seemingly dead: first time he's bloody in the snow, second time someone's hand is on his hand, and this third time he's chilling with his puppy and a dude is about to run a sword through one of them. I think this is a trick by the evildoers at HBO to scare us, and that both Ghost and Jon are going to be A-OK.

Does anybody need a hug or maybe a tissue? It's going to be fine, we're all going to make it, together. Remember, the good guys always win. Um... OK, maybe not. But at least this will be some interesting television. Commence sobbing now.