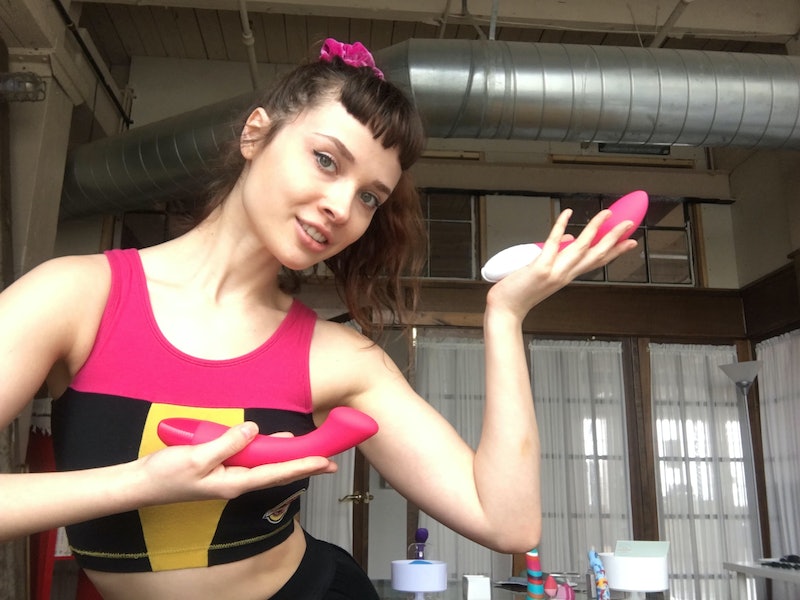 I’ll never forget the first uncut dick I ever saw. I was still a teenager, and the guy it belonged to lived in my area but wasn’t from the U.S. originally. At that point, I had never even seen a photo of what an uncircumcised penis looked like, and I wasn't even sure what I was looking at when I saw his penis. Then, after a moment of confusion, I slowly began to recall the word "foreskin" — I think my dad may have even been the one to educate me about it. Foreskin is essentially a piece of smooth tissue that loosely covers the head (or glans) of the penis and protects it from the elements, but it can also be retracted. When it's pulled back, it tends to gather just below the coronal ridge of the glans. The way it appears varies greatly from person to person, however. Circumcision removes the foreskin altogether, meaning that the head of the penis is exposed at all times.

This partner had a lot of foreskin, too — even when he was erect, I could barely see the tip of his dick peeking out from underneath it. In the flaccid state, it looked like a deep sea hydrothermal vent or pig-in-a-blanket. I had only had a few sexual partners at that point, and since I was so young and inexperienced, I was very honest about the fact that I had no idea how to interact with his penis. He was quite amused that his uncut penis was new to me, and had no problem explaining what kind of stimulation felt good to him.

When we had sex for the first time, it didn’t feel significantly different, but I did notice that when we had unprotected sex, there was a lot less vaginal friction for me. The foreskin seemed to help his penis move with my body instead of against it. Outside of intercourse, I needed to be a little bit more delicate with the head of his penis. I couldn’t yank the foreskin back and go to town on the tip, for instance. The head of his penis was much more sensitive than others I had encountered. Since I was used to going to town on the tip when I gave head, I had to be a lot more mindful. I mostly stuck with gentler, broader strokes with my tongue instead of the fast swirling movements I usually performed. But besides that, I found that it wasn’t all that different than interacting with someone who was cut.

I’ve had what many people consider a lot of sex partners. While my personal experience is not an “average experience” or even statistically relevant, I’d say I’ve been with at least 25 uncircumcised men — practically a quarter of my partners. I’ve seen penises with foreskins so small that I had no idea the person was uncircumcised, and I’ve seen penises where there was so much foreskin that I never really saw the tip of the penis (like my first uncut partner.) I’ve also seen a couple folks with partial circumcisions that were the result of a mistake, and I’ve also been with someone who was circumcised as an adult because their foreskin was very taut and caused them pain during erections.

Everyone’s genitals are different. But as someone with a vulva, I find it quite very interesting to think that folks with penises have this entirely different world where one is either cut or uncut. When I think about the fact that female genital mutilation is considered an unethical practice in America, yet babies with penises are being circumcised without consent at birth, I shudder at the existence of this outrageous double standard.

There’s a lot of conflicting information about whether circumcision is beneficial to one’s health, but I personally believe that circumcision is barbaric and absolutely qualifies as genital mutilation. While some studies and news outlets claim that circumcision reduces the risk of foreskin-related infections, others say there is no realistic health concern related to having a foreskin if you have basic hygiene amenities. According to Intact America, a national advocacy group seeking to end involuntary circumcision, "The foreskin is a normal, sensitive, and useful body part. In infant boys, it serves a protective function, and throughout a man’s life, it keeps the glans moist, shields it from injury, and enhances sexual pleasure. By severing the foreskin, you damage the healthy penis, cause unnecessary pain and bleeding, create a risk of infection and complications, and permanently remove viable erogenous tissue."

From an ethical standpoint, Intact America believes that circumcision is no different than Female Genital Mutilation. "Girls are protected by Federal law from genital surgery, whether practiced in medical or nonmedical settings, and regardless of the religion or cultural preferences of their parents. Every child has a right to bodily self-determination. There is no ethical basis to discriminate against boys in this regard." It really gets my blood boiling when I hear someone retort that circumcised penises "look better" or are simply less annoying to deal with. As a fellow sex-ed colleague of mine used to say, “We don’t chop off our ears just because they’re hard to clean!”

So do circumcised folks experience less pleasure or sensation? There's not clear answer. Technically, someone who is cut has fewer nerve endings than a person who is uncut, however "the first study of arousal was conducted in Montreal using thermal imaging of the penis, and found no difference between circumcised and uncircumcised men aged 18-45." There is absolutely no reliable correlation between circumcision and sexual satisfaction, and being cut isn’t “better” or “worse” than being uncut.

So what is my personal and subjective opinion of sex with cut vs. uncut penises? I’ve had few specific experiences that have shaped my opinion outside of objective ideology on the matter. There are a few reasons I sometimes dislike foreskin. The first time I ever had an issue with an uncut penis was with a monogamous partner whose penis seemed to give me bacterial infections every time we had unprotected sex. Perhaps he had an infection of his own that he continuously passed to me each time we had sex. I’d always begin to feel irritation and discomfort within the next 24 hours, and I found myself making repeated trips to my OBGYN. He diligently cleaned his foreskin, yet as soon as I’d recover from an infection, I’d immediately get another one when we had sex again. Once we began using condoms, the infections ceased.

I’ve also encountered a few uncircumcised penises where their larger foreskins “ate” the condom. Generally, you want to pull back the foreskin just a bit before rolling on a condom, but a few times when I’ve done that, I’ve pulled the foreskin back too far, and the foreskin has pushed forward along the head of the penis and caused the condom to sneak down the shaft of the penis until it, unfortunately, has come off completely. This was always remedied by simply paying more attention to the condom application process, but I’ve needed to take Plan B more than once because of this specific issue. Unfortunately no research has been conducted about condom failure rates vs. circumcised/uncircumcised penises.

But overall, I happen to know my way around an uncircumcised penis a lot better than a circumcised one. My longer-term relationships have just coincidentally been with men who were uncut. One thing I really love about uncut dicks is that I can give them a dry handjob a lot more easily. Also, I think foreskin is so fun to play with. I love gently smooshing it around with my mouth, tongue, and fingers, and sometimes I’ll pull it forward and make it into a little “mouth” and open and close it and pretend it’s talking (yep, I’m a pretty cool and sophisticated partner to have!).

If you’ve never experienced an uncut (or cut) penis, don’t worry — they’re really not all that different at the end of the day. Honestly, I think it’s really thoughtful to ask all new partners how they like to be stimulated instead of leaving it up to guesswork, even if you think you already know what to do. I definitely felt a bit awkward when I told my first uncut partner that it was my first time seeing a foreskin, but communicating that ultimately made sex even better for both of us, and he loved that I cared about making him feel good.

The important thing to remember is that all genitals are awesome and beautiful, regardless of size, color, shape or presence of foreskin. There is no such thing as “normal”, really. Wouldn’t it be boring if all of our crotches were exactly the same? Whether or not you’re cut or uncut, or you have more experience with cut or uncut penises, it really says nothing about who you are or what kind of sex you have.