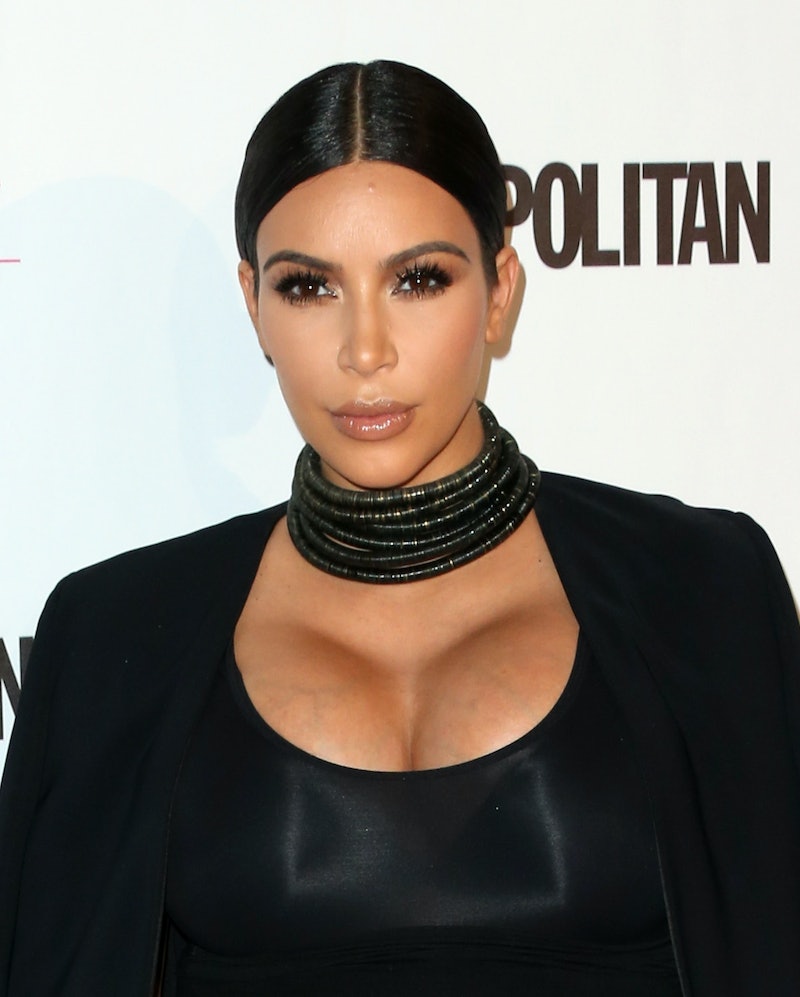 Opening your Internet browser and avoiding a post about Kim Kardashian's nude selfie probably hasn't happened to you in the last few days, and it's not going to happen now because Kim Kardashian's blog post for International Women's Day took her shamers to task in the most body positive, badass way possible. In fact, I'll be snapping my fingers for the rest of the night for Kardashian's incredible blog post.

Just in case you haven't heard yet, on Monday morning, Kim Kardashian posted a nude selfie to her Instagram that featured her insane body covered strategically with black bars. The post garnered attention almost immediately despite hitting the Internet in the wee hours of the morning. Since then, other celebrities have decided to chime in regarding Kardashian's selfie. The picture, which actually seems to be an older image of the reality star, made headlines on its own but has only picked up steam thanks to harsh criticism from public figures such as Bette Midler, Chloe Grace Moretz, and Piers Morgan. Kardashian was quick to clap back at each of these critics, and perhaps due to their shaming, celebrities such as Ariel Winter and Demi Lovato have come out to support Kardashian's now infamous post.

While Kardashian did make her feelings known about fellow celebrities launching criticism, her blog post took a different tone. Instead of launching vitriolic commentary — like the shameful things being left in the comments of her post — Kardashian got straight to the heart of the issue: her sexuality.

Many may also say that Kardashian is putting her body on display in order to pander to the most basic of reasons for which they believe she became famous. Others, however, cite her marriage, her motherhood, or her husband as their main point of critique. None of these criticisms, however, consider Kardashian as a holistic person. Instead, they isolate her roles and position her as only a mother, an object for consumption, or as the property of her husband.

Kardashian rejects all of this, though. Instead, she explains, "It's 2016. The body-shaming and slut-shaming — it's like, enough is enough. I will not live my life dictated by the issues you have with my sexuality." Feigned concern for her relationship with her husband or daughter is only a mask for the true issue: the incredible sense of discomfort many feel when a woman embraces her sexuality.

Perhaps the most problematic element of the body and slut shaming Kardashian has undergone has been the hypocrisy it has bred. Each year, magazines release covers and spreads that showcase the exposed bodies of women, and each year, the celebrities and models appearing in them are praised for their bodies. Kardashian's post has arguably an equivalent amount of skin showing as that of say, a Sports Illustrated Swimsuit Edition, but has received the type of vitriolic commentary rarely seen by a traditional glossy.

It begs the question of why? My answer? It comes down to the commercialization of women's bodies. Mass produced magazines are able to present women's forms in ways that are controlled, their sexuality expressed as deemed fit, and more often than not, presented to appeal to a heteronormative male gaze. Kardashian, however, has total and complete control of her sexuality, displaying it as only she sees fit, in a way that is both body and sex positive and not at all intended for the male gaze.

Kardashian herself sums up the brouhaha over the post best when she tells readers, "I am a mother. I am a wife, a sister, a daughter, an entrepreneur and I am allowed to be sexy." Kardashian needs no one's permission to embrace her sexuality nor should she be shamed for it. It's a strange world we live in when we can only praise women who celebrate their flaws, but not women who celebrate the totality of their bodies.

Check out this video of SI Swimsuit models giving advice to their younger selves and subscribe to Bustle on YouTube!