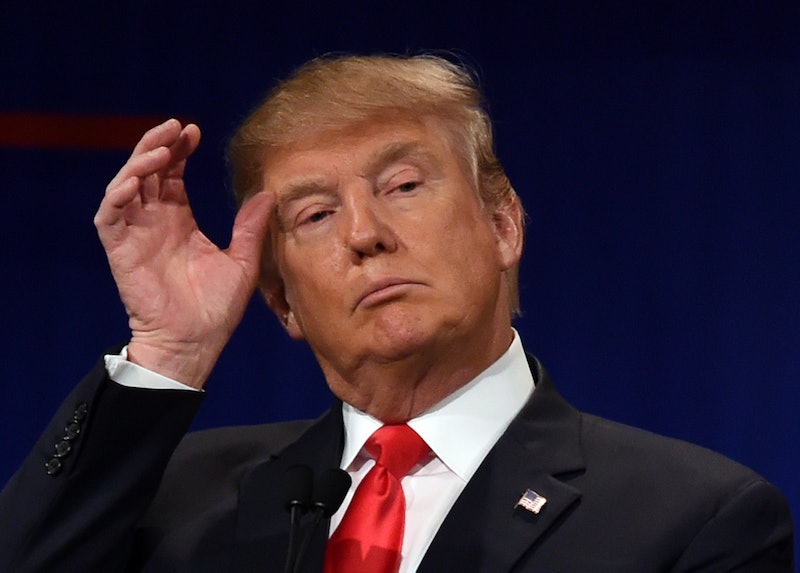 Since Ted Cruz gave Trump a run for his money on Super Tuesday, a mysterious GOP nomination criterion called "Rule 40" has sparked some conversation over the Committee's ability to alter the outcome of the GOP primary. Little did most of America know that the Republican Party has its very own established set of rules that was adopted by the Republican National Convention in 2012, and amended in 2013 and 2014.

According to Rule 40 in particular, a GOP nominee must have won the majority of delegates from at least eight separate states. Theoretically, this requirement could pose problems down the road for GOP frontrunners. However, Trump and Cruz likely have nothing to fret over because the National Committee’s entire set of nomination rules, including Rule 40, is impermanent and subject to change frequently.

For me, after scrolling through over a dozen pages of the "Rules of the Republican Party," subsection (b) of Rule 40 appeared in all of its glory...

(b) Each candidate for nomination for President of the United States and Vice President of the United States shall demonstrate the support of a majority of the delegates from each of eight (8) or more states, severally, prior to the presentation of the name of that candidate for nomination. Notwithstanding any other provisions of these rules or any rule of the House of Representatives, to demonstrate the support required of this paragraph a certificate evidencing the affirmative written support of the required number of permanently seated delegates from each of the eight (8) or more states shall have been submitted to the secretary of the convention not later than one (1) hour prior to the placing of the names of candidates for nomination pursuant to this rule and the established order of business.

This isn't the first time in recent years that Rule 40 has caused an uproar of sorts. Prior to 2012, the rule dictated that a nominee must secure the majority of delegates from five states, not eight. To say the least, the reasoning behind the change had the establishment party's best interests in mind. At the RNC in 2012, lawyer and lobbyist Ben Ginsberg, who also aided 2012 GOP nominee Mitt Romney, proposed the rule change. Allegedly, the changes were made with the intention of protecting Romney from losing a potential 2016 reelection to fellow GOP candidate Ron Paul. Since Romney ultimately lost the race to Barack Obama, the rule change, which makes it more difficult for a contestant to qualify as a nominee, was all for naught. Ginsberg declined to comment to U.S. News & World Report in response.

If the rule remains in place, GOP candidates may consider altering their strategies. According to the rule, votes don't hugely matter unless a candidate can secure over half of the delegates from each state. For example, Cruz won the most votes and the most delegates in Oklahoma on Super Tuesday. With 34.4 percent of the vote, he walked away with 15 delegates. Trump came in a close second with 28.3 percent of the vote and 13 delegates. In total, Oklahoma holds 40 delegates. Rule 40 would render Cruz's win irrelevant because he didn't win the majority (at least 20) of the state's delegates. The same situation applies for Trump in states he's won by a small margin. In a sense, Rule 40 is the Republican equivalent of the Democrats' superdelegate system. It makes things tricky and leaves less up to the voters.

According to RealClearPolitics, delegates will have multiple opportunities to change or even nix the rule from the RNC's list before the Convention rolls along. Having already won a majority of delegates in eight states, Trump will not be affected either way. However, there's a slight chance that the rule may hinder Cruz, who has won just six states so far, and Marco Rubio from winning a nomination. That being said, it's highly unlikely the rule will take precedence over the number of votes received by each candidate. If Cruz manages to overthrow Trump's first place stand, but still can't manage to receive a majority of delegates in eight states, Rule 40 will likely be changed in accordance with the voters' views.