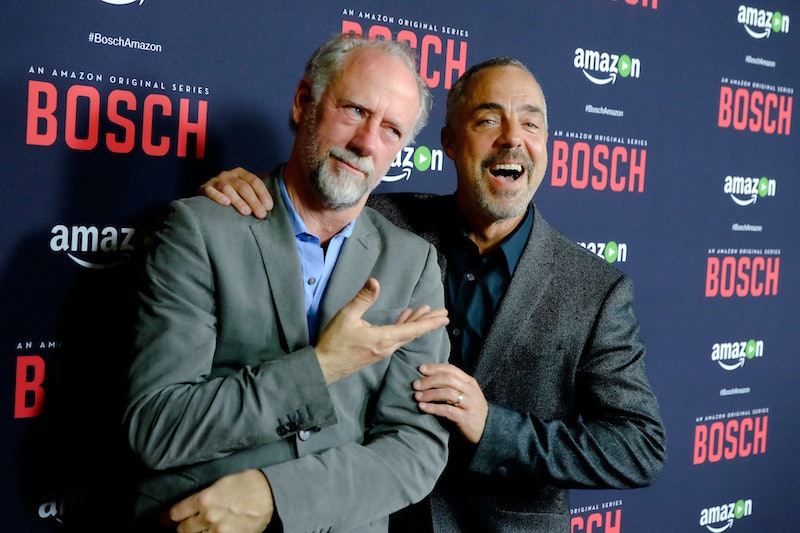 Amazon's marathon-worthy procedural Bosch will drop all of its Season 2 episodes on March 11, and so far, the reviews have been positive. There's no news yet about whether Bosch will return for Season 3, but it's highly likely that there may be more episodes in the future. Even though Amazon isn't measurable on the Nielson ratings, the company told the Los Angeles Times that Bosch did so well in Season 1, it warranted a renewal just weeks after the episodes premiered. "Although executives declined to release specific viewership figures, they said that Bosch broke records with the biggest debut weekend of any original series from Amazon," the newspaper reported. And since it doesn't seem like the series has lost its creative mojo — The New York Times said of Season 2, "the pleasures of Bosch are narrow but intense" — keep an eye out for a renewal announcement within just a few weeks.

The most successful aspect of the series is how well it's been able to condense and adapt its inspiration. Bosch is based on Michael Connelly's book series about the titular detective's investigations around the city of Los Angeles. Det. Harry Bosch, an obsessive veteran devoted to his line of work, has many adventures on the page. And with each season adapting roughly three book storylines, here are some suggestions of Connelly's other books that would fit perfectly in the TV adaptation of this LA noir.

Obviously, the audience of the Amazon series is already familiar with the character of Harry Bosch. But the show can still adapt his first literary adventure when Bosch uncovers a conspiracy with — and eventually implicates — the FBI. In the book, Bosch works with his ex-wife, Eleanor Wish, and I'd really like to see if there's any remaining romantic chemistry between them on the show.

The People v. O.J. Simpson has proven that issues of police brutality and how it plays into LA bureaucracy can make incredibly compelling television. Sadly enough, these issues have remained the same since Connelly wrote this book in 1999 about Howard Elias, a lawyer who specializes in prosecuting police corruption.

A Darkness More Than Night

Now that viewers are used to watching Det. Bosch solving cases, Bosch should make him a suspect. In this book, he's framed for a murder he didn't commit and watching Bosch go on the run might add more pulpy action to what's usually a relatively slow and measured series.

The plot of Lost Light probably isn't worth adapting (it's mostly a vehicle for Harry to find out that he has a daughter, which he already knows in the series), but it's the first of the novels to be told in first person perspective. The TV series can't literally be told in the first person, however, there could be an episode that narrowed even closer on Bosch's perspective, with no scenes from the POV of others.

Former FBI profiler Terry McCaleb is a supporting character in several Bosch books. This one is the conclusion of Bosch and McCaleb's team-up to find The Poet, a notorious killer, and features an explosive and sad ending that would probably make for a fantastic Bosch Season 3.

Depending on what happens at the end of Season 2, perhaps Det. Bosch could potentially need a break from the force. The Closers opens with Bosch returning to the force after a short retirement — always a reliable cop show trope.

This book is mostly set in China, which could pose logistical and budgetary concerns for the original series. But the core of the story, about Bosch's daughter Maddie being in danger, could make for a high-stakes story for the possible (and very likely) Bosch Season 3.

More like this
Everything To Know About The Possibility Of 'The Essex Serpent' Season 2
By Rachel Mantock
'Bridgerton' Star Nicola Coughlan Confirms Season 3 Will Focus On Colin & Penelope
By Grace Wehniainen and Alyssa Lapid
The Time Traveler’s Wife Book Has A Heartbreaking Ending
By K.W. Colyard
'Derry Girls' Fans May Have An Exciting Spin-Off To Look Forward To
By Olivia-Anne Cleary
Get Even More From Bustle — Sign Up For The Newsletter