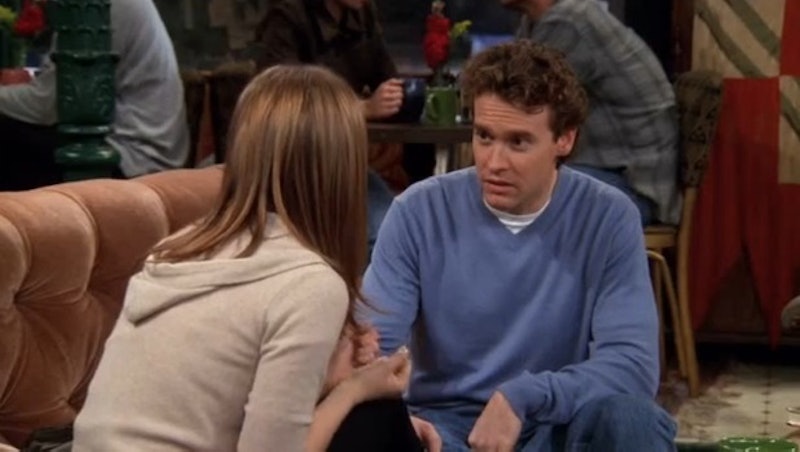 I know it's weird to look up your own ex-boyfriends and see what they're up to now, but what if it's Rachel Green's ex-boyfriends? That's fine, right? Like, it's OK for me to do some digging into what Joshua from Friends is up to now? I'll assume yes, as long as I don't start texting him "is she prettier than me?" at odd hours of the night. Obviously, I would never do that, especially since it's been about 18 years since we spent any significant time with good old Joshua Burgin.

As you may recall, he first appeared in "The One with Rachel's Crush," which was Season 4, Episode 13, as one of Rachel's clients at Bloomingdale's, who needed her personal shopping expertise to help him build up his post-divorce wardrobe. As you might imagine from the title, Rachel had a big old crush on him, which caused her to finagle him into a relationship before he was really ready for one, and push it forward far too quickly to try to keep up with Emily and Ross, who were speeding toward the altar. This was the guy who came back to try to maybe reconcile with Rachel, only to have her answer the door in a wedding dress, remember? Yeah, yikes. So have things gone any more smoothly for Tate Donovan in the years since?

Um, yeah, big time. Especially if your goal is "being featured on every television show ever," because that's pretty much what Donovan has done. Since his five appearances on Friends in 1998, Donovan has had cameos on The Guardian (2002), Law and Order: Criminal Intent (2007), Masters of Sex and Red Oaks, both in 2015, and a whopping three appearances already in 2016, on Elementary, Limitless, and The Mysteries of Laura. And that's not even taking into account the shows where he's had extended arcs, like The O.C., where he spent 39 episodes as Jimmy Cooper, Damages, where he did another 39 episodes as Tom Shayes, Hostages, where he spent 15 episodes as Brian Sanders, or the miniseries 24: Live Another Day, which gave him 12 episodes as the character Mark Boudreau.

And, as if you weren't tired enough reading that, the reigning King of TV apparently also does movies — just the top three that jump out at me are Good Night and Good Luck., Shooter, and Argo. Just some Oscar-nominated and -winning films, no big deal, with two more films currently completed or in post-production, for 2016 release. This guy really does not let up, as he also has some on- and off-Broadway stage credits, as well as TV show directing credits.

I'm exhausted just reading about everything he's been up to since being greeted at Rachel's door with an "I do," so keep up the good work, Tate Donovan. Rachel and Ross ended up together anyway, so no harm done.