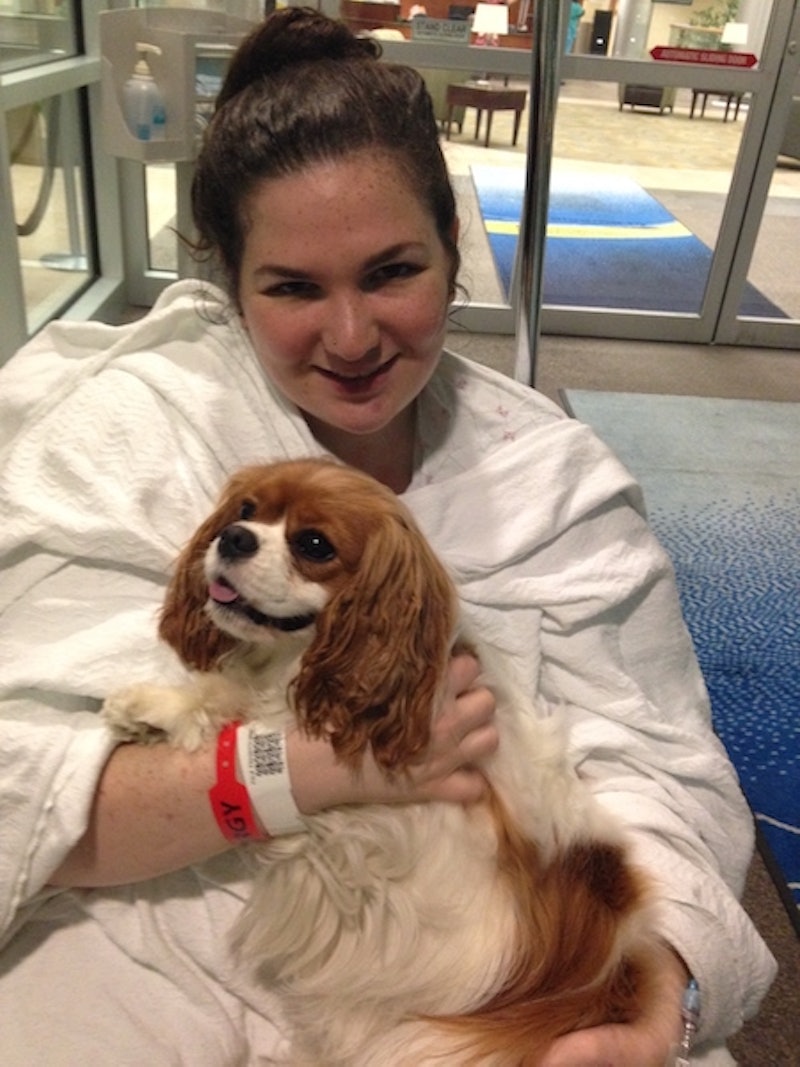 As a college freshman, everything in my life seemed to be going well; I had recently declared my major, made a close group of friends, and was enjoying my fair share of typical college fun. With the exception of a few minor illnesses that any college student is likely to run into, I was healthy and feeling well. And then, out of nowhere, I woke up one morning in April with severe pain on the lower right side of my abdomen. My body felt like it was imploding. At the time, I did not even know how to describe the pain — searing? Stabbing? Shooting? It was like someone had put a lit stick of dynamite inside of me and it was slowly exploding and setting all of my insides on fire. I could barely move, and hard as I tried to find a comfortable position, I couldn’t.

Unsure of what to do, my first instinct was to call my mom, who told me to call the health center. After calling health services, a medical transport van picked me up outside of my dorm building and took me to the university health center. The doctor came in and told me they were going to run tests to make sure it was not appendicitis, and when they confirmed that wasn’t the case, she told me there might be something wrong with my ovary.

I had not even thought of the possibility that my ovary could be causing the pain, and at that point I wasn’t even sure how or what could be wrong with it. The doctor told me I needed to get a pelvic ultrasound, which involved having a stranger poke around at my lower abdomen with an ultrasound wand. I was driven back to my dorm and a few hours later, I received a call from the doctor, letting me know that I had a fairly large cyst on my ovary, and that they were going to prescribe me some pain medicine that would hopefully dull the pain until the cyst went away.

Several months later, I was back at home for the summer and per the health center’s recommendation had followed up with a gynecologist. After another ultrasound that revealed the cyst had gone away, she was unsure why I was continuing to have pain and suggested trying birth control pills and waiting it out. My pain was horrific during my periods, but it also would begin before my period and continue after. My days without pain were quickly diminishing, and it did not take long before it became a daily occurrence. When the pain continued, I went to a different gynecologist who said the word "endometriosis" to me for the first time.

The truth was, I was already pretty sure endometriosis was the cause of my pain. After the first gynecologist I saw gave me little suggestion as to what the problem might be, I had spent a lot of time scouring the Internet for answers regarding the cause of my near-constant discomfort. When I first came across an article about endometriosis, the disease seemed to fit my symptoms almost perfectly. Endometriosis is a disease that causes the type of tissue that grows inside the uterus to grow in other areas — such as the ovaries, bladder, pelvic walls, and uterine ligaments. The endometriosis tissue grows just as the tissue inside the uterus does; it sheds every month when hormones send signals that the woman is not pregnant. However, this tissue has no way to exit the body, and ends up causing inflammation and scar tissue. There is no cure for endometriosis, but the symptoms can be treated in several ways, including hormonal treatments, other medications, and surgery.

In the past 3.5 years since my diagnosis, I have had four surgeries, taken more types of medication than I can remember, and have tried countless other products and alternative therapies that have been shown or suspected to help with pain. I have gone through more heating pads than I can count, and have begun using heated blankets instead, since even the largest heating pads are not quite big enough to cover all of the places on my body that hurt. Besides my ever-changing cocktail of hormone, nerve, and pain medications, frequent hot baths tend to be the most effective tactic for managing my pain.

Before that morning when I first woke up in pain, I never would have imagined my life would be like this. I have spent my college days planning out my homework schedule to leave me plenty of extra time, in case I was having a bad pain day. I have had to skip parties, concerts, and other social get togethers, because I was in too much pain to leave my bed. I have emailed professors asking for extensions on projects or telling them why I had to miss their class. While most college students tend to cherish every moment of sleep they can get, I have spent much more time in my bed than I would have liked.

But at the same time, I’ve learned to manage my time and work more efficiently than I ever used to be able to. I have learned that missing a few parties does not mean that my friends stop wanting to hang out with me, and that my closest friends are the ones that can tell when I am in pain or offer to sit next to me in my bed. I would never say that I am thankful for my endometriosis, but I am thankful for what having a chronic illness has taught me and how it has helped me become the mature and confident person that I am today.

When I think about my body, I often think about those old fashion scales, the ones where you have to keep adding weights to it until the bar is perfectly balanced. If you add too much weight, the scale will tip to the right; if you don’t add enough, it will tip to the left. While I may have my fair share of body image issues, this analogy really has nothing at all to do with weight. My body is that center portion of the scale, hoping to have the perfect amount added to either side. It craves that perfect balance of rest and exercise, some hormones but not too many, healthy eating with the perfect balance of food groups, and enough pain medication to control my symptoms but not too much that my brain feels foggy. While I am often extremely frustrated when my body feels like it is failing me, I try to remember to listen.

Learning to listen has probably been the most difficult part of this disease. Anyone with a chronic illness knows that we do not get to pick our good and bad days. No matter how much rest I try to get or how hard I try to eat the right foods, my body still might interfere.

Last year, before leaving to study abroad in London, I found out I had a cyst on my ovary. I was in horrendous pain, and I was scheduled to leave to attend a ten-day seminar in Ireland in less than two weeks. I was anxious, upset, and most of all, disappointed. I was disappointed that my body was once again trying to interfere, and went back and forth about whether I should skip the seminar and spend the ten days at home, then go straight to London.

Ultimately, I decided I would regret my decision if I did not go. Armed with Vicodin and a doctor’s prediction that the cyst would go away on its own, I went to Ireland. I spent the entire trip feeling victorious, like I had won a battle with my body. Sure, I spent some days feeling a bit hazy from the pain medication I needed to take during long walking tours or lectures, but I was still able to be there and do everything I had planned. I was so excited to be strolling through the streets of Dublin or walking across the coastline in Northern Ireland. The pain did not win.

A couple of months later, my friends and I had booked a trip to Milan for Design Week. We were all so excited, and had been looking forward to the trip. But just a few days before we were scheduled to leave, I woke up in severe pain. When the pain didn’t subside with my usual combination of medication and rest, I was concerned that the cyst might be growing. I scheduled a doctor’s appointment in London, and ended up seeing a gynecologist who suspected I had more scar tissue attaching some of my pelvic organs. She recommended I cancel my trip and consider another surgery to remove whatever scar tissue was present. I watched my friends pack their suitcases from my bed in the flat, and I spent the next several days in that bed wondering if I had made the right decision.

My story is not a unique one; an estimated one in ten American women suffer from endometriosis. The disease can present itself in different ways due to its long list of symptoms, and every woman is affected differently. Unfortunately, many women do not get a diagnosis until years after their symptoms begin, due to the stigmas our society has around talking about menstruation and the misinformation surrounding the disease. March is Endometriosis Awareness Month, and recently Lena Dunham has publicly shared her struggle with endometriosis. Endometriosis is just now beginning to make news headlines, but in reality, it is an epidemic that has been causing pain and suffering for longer than any of us know. So it is time for us to speak out, erase the stigmas, and hopefully find a cure.