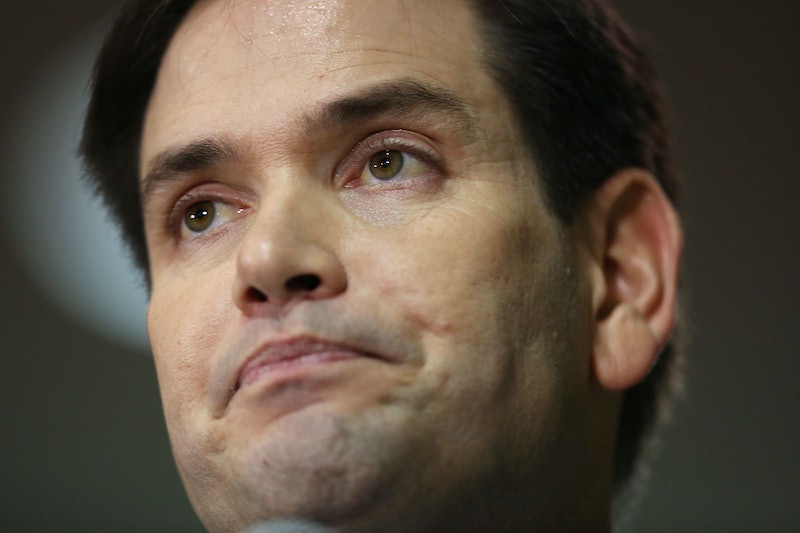 After this most recent Tuesday's primary results, it's abundantly clear that being crowned the great/last/best hope for the GOP establishment has done nothing to infuse Marcomentum into the Republican presidential race. Hell, that was already clear after the Florida senator's nothing-short-of-sad Super Tuesday last week. And yet he managed to do worse this week, securing a whopping total of zero delegates from Hawaii, Idaho, Michigan, and Mississippi on March 8. But maybe the establishment accolades did more than simply not help. Has the Republican establishment ruined Marco Rubio's presidential campaign?

When John Kasich has a better night than you — and the Ohio governor had a blowout compared to Rubio — the campaign death knell is audible. Sure, Rubio still has his home state of Florida's primary coming up next Tuesday, so he's not officially quitting in the next few days. But at this point, one doesn't need to wait until the body is cold to perform an autopsy on the Rubio presidential run — nor wonder if all the endorsements from members of the GOP establishment were the cause of death.

Let's recap the litany of high-ranking, esteemed, and (seemingly?) influential Republicans who backed Rubio. There's Nikki Haley, Governor of South Carolina and the Republican given the honor of responding to President Obama's State of the Union address this past year. Rubio came in second in her state, which is fine ... but not winning. Oh, and he picked up a grand total of zero delegates, because the Palmetto State is winner-take all.

Pat Roberts, who has served as one of Kansas' senators for nearly 20 years, gave his stamp of approval to Rubio ... and Rubio came in third in his state. The governor of Tennessee, Bill Haslam, also endorsed Rubio, and Rubio also picked up bronze in his state.

According to FiveThirtyEight's endorsement tracker, which not only tracks endorsement but also weighs them by whether it's from a governor, senator, or representative, Rubio is far and away the winner. He has 168 points, with Ted Cruz, the next closest, eating his dust with a meek 44. It may be the only GOP race Rubio is winning.

"Marco Rubio placed third in the Republican Iowa caucuses, but he’s racking up endorsements and raking in cash like he’d come in first," Gabrielle Levy wrote in U.S. News & World Report of Rubio's surge in establishment endorsements after the first-in-the-nation caucus. After all, the establishment Republicans largely didn't (and still don't) want Trump to get the nomination. First, it was because they didn't think he'd successfully challenge Hillary Clinton in a national election (and the polls suggest that's an accurate prediction). Now, there's the extra concern that Trump and his crass, xenophobic, and borderline-fascist rhetoric would bring down the party — and possibly the country with it. While Cruz did better than Rubio and Trump in Iowa, Trus(Ted) is so beloved by his colleagues that fellow Republican (and former party nominee rival) Lindsey Graham joked that:

If you killed Ted Cruz on the floor of the Senate, and the trial was in the Senate, nobody would convict you.

So the GOP rallied extra hard around Rubio through February and into March — but that may have had the absolutely opposite effect of what was intended. Rubio's Marcomentum not only didn't pick up, but appeared to plummet, especially when compared to Cruz's and Kasich's gains. Also, among all of the GOP candidates, Trump is still very much the man to beat.

Some may argue that Rubio's attempt to sling mud at Trump with his now-infamous "small hands" joke set him up for disaster. Moreover, Rubio's failure to, you know, actually win delegates only reaffirmed concerns that he wasn't a viable competitor for Trump — which was the best thing Rubio had going for him, at least to many Republicans.

However, one of the most significant and less-talked-about factors in the failure of Rubio's presidential campaign may be that he was labeled the establishment choice in an election at a time when anti-establishment is doing pretty darn well — and that holds for both parties. Both Trump and Vermont Sen. Bernie Sanders are doing far, far better with voters than most people would have thought a year ago. Robert Reich, who served as Secretary of Labor under Bill Clinton, doesn't think that these two political outsiders' once-considered-improbable success is a coincidence.

"There’s no official definition of the 'establishment,' but it presumably includes all of the people and institutions that have wielded significant power over the American political economy and are therefore deemed complicit. At its core are the major corporations, their top executives and Washington lobbyists and trade associations; the biggest Wall Street banks, their top officers, traders, hedge-fund and private-equity managers and their lackeys in Washington; the billionaires who invest directly in politics; and the political leaders of both parties, their political operatives and fundraisers," Reich wrote in the Chicago Sun-Times. "Some Americans are rebelling against all this by supporting an authoritarian demagogue who wants to fortify America against foreigners as well as foreign-made goods. Others are rebelling by joining a so-called 'political revolution.'”