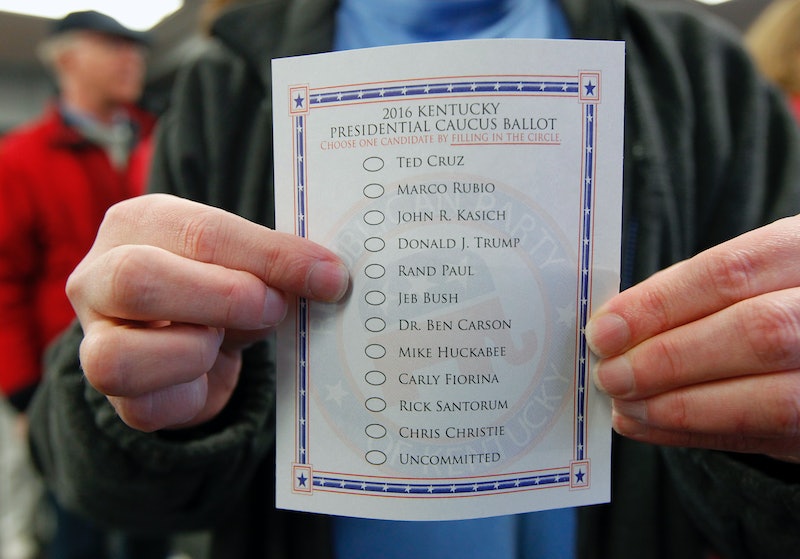 At this point, the grownups in the Republican Party are pretty much morally obligated to do whatever is necessary to prevent Donald Trump from appearing anywhere near their ticket in the general election. The slumlord formerly known as Drumpf has managed to capture the majority of the delegates that have been up for grabs so far, and a clear runner-up has yet to emerge from the increasingly narrow field. But who will prevail and become the GOP establishment candidate in the battle for the soul of the party? Perhaps now more than ever, it's anyone's game.

Up until this point, the favored narrative among the chattering classes was that Marco Rubio would be able to bat cleanup and pick up the momentum after Trump's eventual withdrawal from the race. However, after 15 primary wins, the most recent of which came in the Aloha State (seriously, Hawaii?), the former reality show host doesn't look like he will run out of hot air anytime soon. Meanwhile, Rubio's only first-place showing so far was in Minnesota — that good ol' reliable GOP stronghold. Rubio has also won the non-state-which-really-should-be-a-state of Puerto Rico. That victory won't mean much come November, since the island territory has no say in the general election. None of this bodes well for the Florida senator.

Politico suggests the possibility that the GOP establishment is creeping toward the idea of President Ted Cruz. Charles C. Foster, a longtime Bush loyalist, went on the record to try to drum up support for Cruz. “Most people now think Ted’s the best vehicle to defeat Trump,” he said, adding "I would say some are enthusiastic for Ted, some are just saying, ‘OK, Ted’s not my first choice, but anyone that can beat Trump, I’ll support.’”

There is still a distinct lack of enthusiasm for the senator from Texas, though. Cruz won his home state by a historically small margin. That could be why deep-pocketed Texas political operatives are trying to make the case for him, even after the Lone Star state has gone to the polls; the best place for Cruz to start to make up an enthusiasm deficit should be in his home state.

Ohio Gov. John Kasich rounds out the field of potential GOP nominees. The former managing director of Lehman Brothers has waged a relatively low-key campaign compared with his fellow candidates, specifically taking pains to position himself as a moderate, especially when compared with Trump. However, other pundits seem to think that Kasich is aiding and abetting Trump's rise, or even gunning to be his running mate. Whatever Kasich's endgame is, at this point, it is clear that he's not just a garden-variety moderate Republican. However, his path forward isn't becoming any clearer.

Of course, this analysis assumes no further entrants to the field, and that the candidates who have withdrawn from the race or suspended their campaigns won't reenter. Whomever ends up winning the support of the traditional wing of the GOP will face an uphill battle — not only the Democrats, but also against the long shadow of Trump's bid.

More like this
Michigan’s Governor Is “Going To Fight Like Hell” To Protect Abortion Access
By Andrea Zelinski
How To Fight For Reproductive Rights, Based On How Much Time You Have
By Courtney Young
LGBT+ Men Fleeing Afghanistan Were Denied Asylum By The Home Office, New Findings Show
By Sam Ramsden
Help! My Partner Only Wants Sex Late At Night & Won’t Compromise
By Sophia Benoit
Get Even More From Bustle — Sign Up For The Newsletter