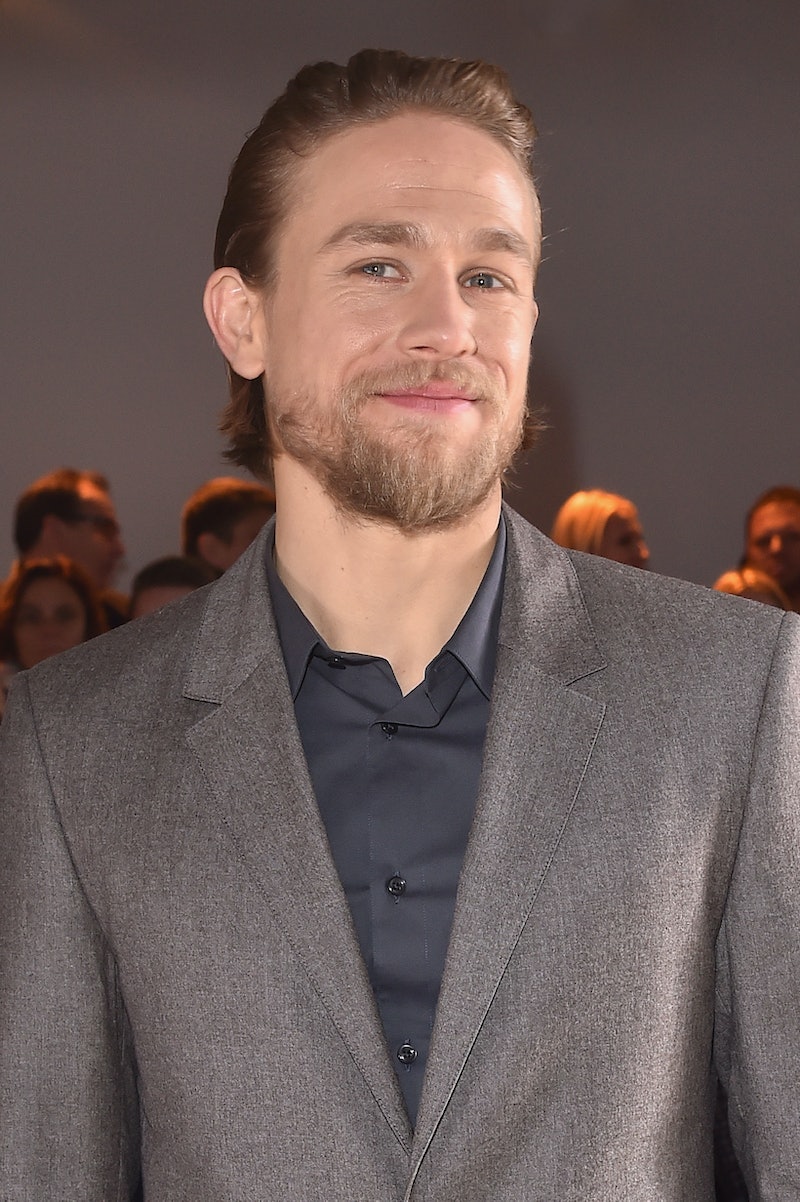 You would think that after watching Sons of Anarchy people would know to never mess with Jax Teller. Unfortunately, that's not the case. Recently, Charlie Hunnam wrote a letter defending his girlfriend, Morgana McNelis, and had his "good friend and long time supporter" Tina Lou post it on his Facebook fan page. It appears that the British actor's girlfriend of 11 years has been being bullied online and Hunnam has had enough, which is why he wrote the message.

His letter to fans starts out:

It has been brought to my attention that there is a group of immature girls posting a large number of hard messages aimed at my long time girlfriend. I would respectfully ask you to stop doing this. She is an intelligent, beautiful, kind person who just tried to live a simple life and has nothing to do with the entertainment industry. If you want to talk sh*t, talk sh*t about me, leave her out of it.

Then, the 35-year-old actor brought up an important point: disrespecting someone Hunnam cares about so much goes against what being a fan means. Really, everyone should be kind to one another, but it's especially strange to Hunnam that individuals claiming to be his fans would act this way. "What is most confusing is that these negative and totally unprovoked attacks appear to be coming from the people who call themselves my fans," he wrote. He explained even further,

Think about the logic of this for a moment. This is a girl I love very much and have spent the last 11 years of my life with and hope to spend the next 60 years. She has been my loyal and supportive partner long before I had any success or money. Why would you attack her out of admiration for me? It makes no sense.

What the Crimson Peak actor hopes fans, and many others, will take from his message is to start spreading love and positivity, rather than hate and negativity. What's the point in living a life, where you try to make others feel bad? With that, here are his closing arguments:

Perhaps you might think about spending the time you dedicate on attacking her on improving the quality of your own life, as it is well known that this type of random hatred usually comes from deep rooted personal unhappiness. This about this. [sic] Also, I guarantee if you knew her you would feel very silly, as my girlfriend is one of the kindest, nicest, most virtuous people I have ever met. There is literally nothing about her or her behavior that deserves this type of condemnation.

One would think this would've been enough to shut down the haters, but, sadly, it didn't. Soon after sharing Hunnam's post, his friend Tina Lou started getting backlash. So, Hunnam spoke out once again hoping to end all of this once and for all. He created a video, which he sent to Lou to be posted on Facebook.

In the video he says,

The fact you're [Tina] getting harassed for doing that, is sort of the direct opposite of the message that I was trying to convey, which is simply that life can be very difficult without people going out of their way to be nasty to each another, you know? Let's all just try to be a little more kind. I don’t do social media, but I believe the genesis of social media was a way to create a forum for people to make new friends and to sort of express different ideas and bring different cultures and ideas together — not as a new forum for bullying, which seems unfortunately to be an unpleasant side effect of it.

I don't think I could've said it any better myself. You can watch the video in its entirety below.

As for McNelis, who is a jewelry designer, she shared her many thanks and gratitude on Facebook for all of the love and support she has received. "The outpouring of positivity gave me courage to keep being vulnerable and to continue to put myself and my designs out into the universe," she wrote. "It's so encouraging and comforting to know that there are classy, smart, beautiful, compassionate women in this world supporting other women." Isn't that the truth?

Here's hoping Hunnam's fans give a hard listen to his words, because they truly are important. Also, is there any type of award to give Hunnam for being the best boyfriend ever?

More like this
This TikToker Has Genius Advice For Boosting Your Dating Confidence
By Lexi Inks
Sandra Bullock, Girlboss Extraordinaire
By Matt Harkins & Viviana Olen
Spice Girls’ Net Worth: The Richest Member Is Wealthier Than The Rest Combined
By Hugh McIntyre
The WAGatha Christie WhatsApp Messages Have Been Released — & They're Wild
By Sam Ramsden
Get Even More From Bustle — Sign Up For The Newsletter