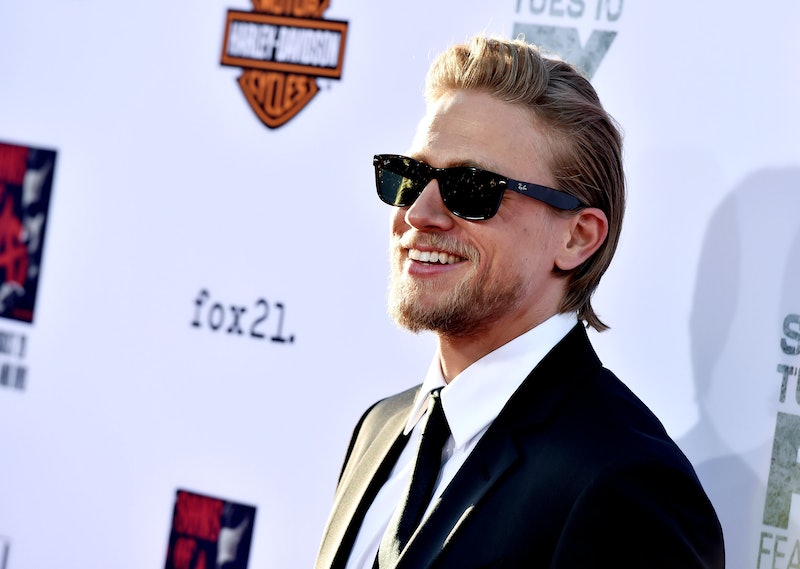 Hey, want to hear something that will make your heart feel like it's been run over by 1,000 Sons of Anarchy motorcyclists? No? Too bad, I'm telling you anyway. The rugged man of all your dreams, Charlie Hunnam, has a girlfriend. And not just that, they've been together for about seven years. That's right, people, your fantasies of recreating Kanye West's " Bound 2 " video with Jax Teller have been officially squashed. If this ruined your day, I'm sorry, but someone has to share in this pain with me.

The English heartthrob has been dating Morgana McNelis, also known as the Luckiest Woman Alive, since 2007. He was previously married to actress Katharine Towne for a few years before their divorce in 2002. Since McNelis tends to avoid the red carpet and is hardly ever seen at events with Hunnam (which explains why I was blindsided by this news), it's hard to find out much information about her, but we do know a bit about McNelis besides the fact that she gets to kiss Hunnam's face whenever she wants. For example, she designs jewelry and lives on a ranch with a hell of a lot of animals. Here's everything we know:

Actresses Winona Ryder and Maggie Siff, Hunnam's co-star on SOA, are both fans of McNelis' jewelry line, Maison De Morgana. She also created a line of jewelry the proceeds of which went towards the Boot Campaign which raises awareness, promotes patriotism, and provides assistance to veterans and their families. Hunnam definitely found a keeper.

She's serious about her craft, too, and explains her dedication on her website:

Quality is paramount for me. It’s not enough for my jewelry to be beautiful and unique, I want it to hold its value. In 20 years, I want women to still be wearing the jewelry they buy today.

They own donkeys — Multiple donkeys

In an interview with 7 Nights magazine, Hunnam got real about how the couple is trying to live off the grid on the ranch they just bought outside of Los Angeles:

I don’t go to parties — I don’t shuck (sic) and jive it up with the Hollywood crowd. None of that crap interests me at all, and actually, my girlfriend and I just bought a ranch, so we are getting out of Hollywood completely. It’s in California. We’ve got 30 chickens and a couple of donkeys, a couple of ducks and we’ve got a big, organic garden. We are going to try to live a bit more sustainably.

She is definitely NOT using him for his fame

McNelis is so camera shy that she reportedly skipped walking the red carpet at Hunnam's Pacific Rim premiere. At the Season 7 premiere of SOA, however, she went inside to hang with her boyfriend's co-star, Marilyn Manson. Casual.

They look really cute together

It's just a fact.