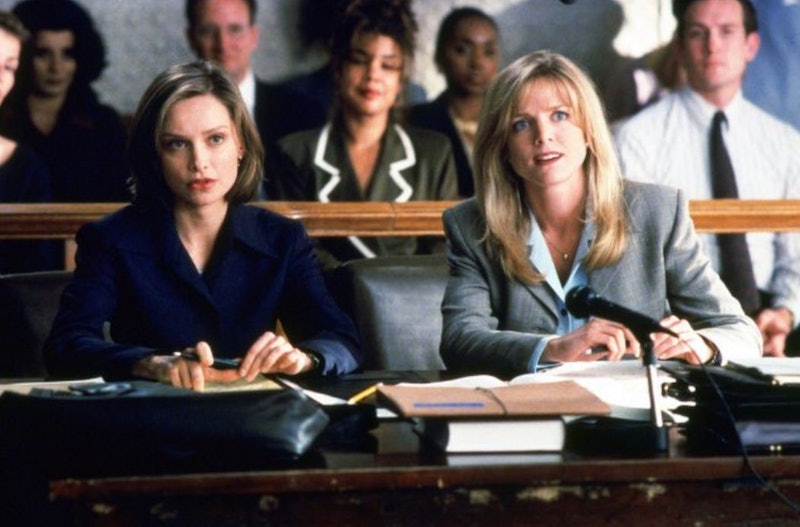 It's undeniable that the '90s can lay claim to some major advancements in gender equality. In 1993, the passing of the Family and Medical Leave Act gave men and women protected unpaid leave in the workplace to deal with family emergencies. In 1997, the Supreme Court ruled an equal number of men and women must participate in sports for schools to receive Title IX funding. But while moments like these were milestones, gender equality was also trivialized in the '90s, too. Despite the momentum gender equality was afforded by movements such as Third Wave Feminism, the decade wasn't all progress on the parity front.

In fact, some historians say gender equality actually stalled out in the '90s. Whereas women's participation in the work force rose seemingly exponentially in the preceding two decades — jumping from just 44 percent to 74 percent from the '60s to 1990 — it rose only four points to 78 percent in the '90s before dropping back down to seven percent in 2010.

It goes without saying the setbacks don't diminish the steps forward. However, it's important to take time and review history through a critical lens because, really, how else will we learn from our mistakes? They say hindsight is 20/20, and it's much easier to recognize the moments progress has faltered when you have the added perspective of time past. Gender equality is an imperative and ongoing narrative in our nation and globally for one very important reason: we're not there yet. And until we are, we can't afford not to consider the many ways in which we've succeeded and stumbled in this critical endeavor.

So let's take a look at the a few of the latter, spanning the spectrum from pop culture to current events.

In 1993, a young woman from Powdersville, South Carolina applied for admission to the Citadel — one of the country's oldest, and historically all-male, military colleges. She was accepted, only to be rejected upon discovery of her gender. Following a successful lawsuit against the institution, she joined the otherwise all-male incoming corps of cadets in 1995. This was clearly a huge moment for gender equality. Unfortunately, though, not everyone viewed her acceptance as a victory — many people marginalized her admission, and some were downright hostile. A popular bumper sticker began circulating that snarked, "Save the Males, Shave the Whale." After only a week, Faulkner quietly resigned on the grounds of extreme emotional and psychological abuse. When she left, male cadets across campus openly celebrated. In 1996, however, the Supreme Court ruled that both Citadel and Virginia Military Institute must open admissions to women, so some good came out of the incident, too.

Was Ally McBeal a fun watch? Sure. But in terms of gender equality, it can be argued it didn't bring much to the conversation. While the legal dramedy did star a bevy of female lawyers (an occupation once considered an old boys' club), the show's depiction of those women further contributed to the objectification of women in the workplace. The title character herself perpetuated unrealistic and at times unhealthy beauty standards. The series seemed to answer the question "Can women have it all?" with "Sure, as long as you happen to fit society's arbitrary beauty standards."

Bear with me here. The gaming world has not exactly been a realm where gender equality is a high priority (although that's certainly been changing in recent years, and definitely for the better). So, in 1996, when the series Tomb Raider was released featuring a badass chick as the main character, it was an understandably exciting moment. A female character who travels the world in search of forgotten artifacts, often besting the men littering the same field, should have been a big deal. Unfortunately, what could have been a majorly empowering moment for gender equality was trivialized by the depiction of Lara Croft as a somewhat frail yet remarkably busty lady who was clearly designed for the straight, male gaze. Even Toby Gard, the character's creator, confessed as much. "The sense of protection is something that I didn't think people had capitalized on in games before," he said of her vulnerability, adding of her ample breasts, "The goal was to have her as an exaggerated representation of the female form."

More like this
The 'Hocus Pocus' Sequel Finally Has A Release Date & It Makes Total Sense
By Shannon Barbour and Radhika Menon
Remember These Ancient Pieces Of '90s Tech?
By Lucia Peters and Emma Carey
11 Trends From The ‘90s That Made You Feel So Cool
By Julie Sprankles
8 Creepy Things You Probably Did In The '90s
By Julie Sprankles
Get Even More From Bustle — Sign Up For The Newsletter