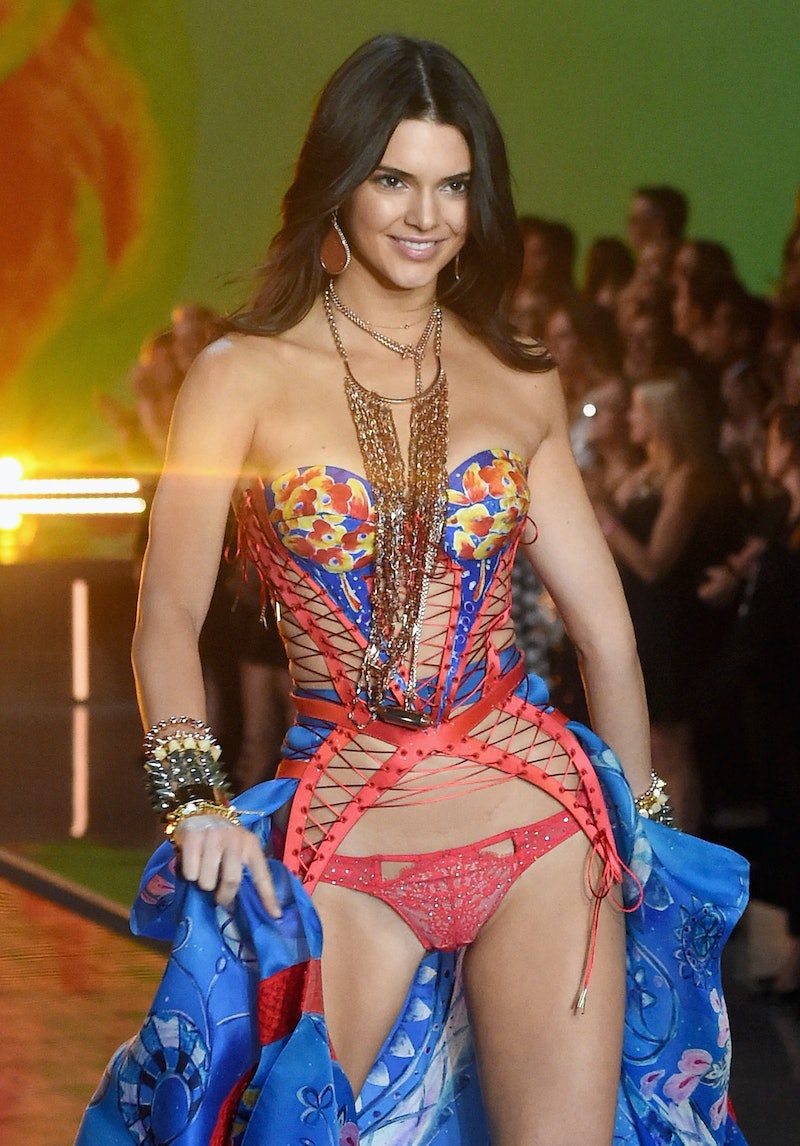 There are few people — if any at all — who would criticize Kendall Jenner's appearance on the Victoria's Secret 2015 Fashion Show runway. She looked just as fierce as the staple angels, which might leave you wondering whether Kendall Jenner is in Victoria's Secret 2016 Swim Special. Unfortunately, she didn't make an appearance, but there's certainly a case that she could in upcoming years. While there's some who may point out that it's Paris Fashion Week, and Jenner is clearly there, the swim show was pre-recorded. Whatever the reason, though, there's no doubt Jenner would have slayed that swim runway.

Jenner made waves last year when it was announced that she would appear at the 2015 Victoria's Secret Fashion Show and with her best friend Gigi Hadid, no less. The ladies posted adorable celebratory Instagram images after the announcement to not only celebrate their individual good fortunes but to celebrate for one another. Come show time, it was hard for any to focus on someone other than Jenner. The supermodel hit the catwalk in a gorgeous, butterfly-inspired printed skirt and strappy corset with a lace bikini panty. Next, she rocked a beautiful, almost Cinderella-themed glittering jacket over a baby blue bra and panty set as The Weeknd crooned in the background. Throughout the entire show, she totally slayed proving that she deserves a space on every Victoria's Secret runway, including the 2016 Swim Special.

While Kendall Jenner didn't appear at the 2016 Victoria's Secret Swim Special, there's plenty of evidence to prove that she deserves a spot in future line-ups, even outside of her participation in the 2015 catwalk.

Who could forget when she appeared on the cover of GQ in all her bikini glory? Totally a major moment for the model.

Not to mention, Kendall has already been in St. Barth's where the 2016 swim show was actually filmed. She looks killer rocking that hunter green bikini.

Clearly, she knows how to rock different styles. This twinning moment in white one-pieces was perfection.

Remember her orange bikini and body chain? Clearly, she's got the accessory game down.

So while Kendall Jenner doesn't appear at the 2016 Victoria's Secret Swim Show, she's got one hell of a resume showing that come 2017, she should be strutting down that beachy runway.