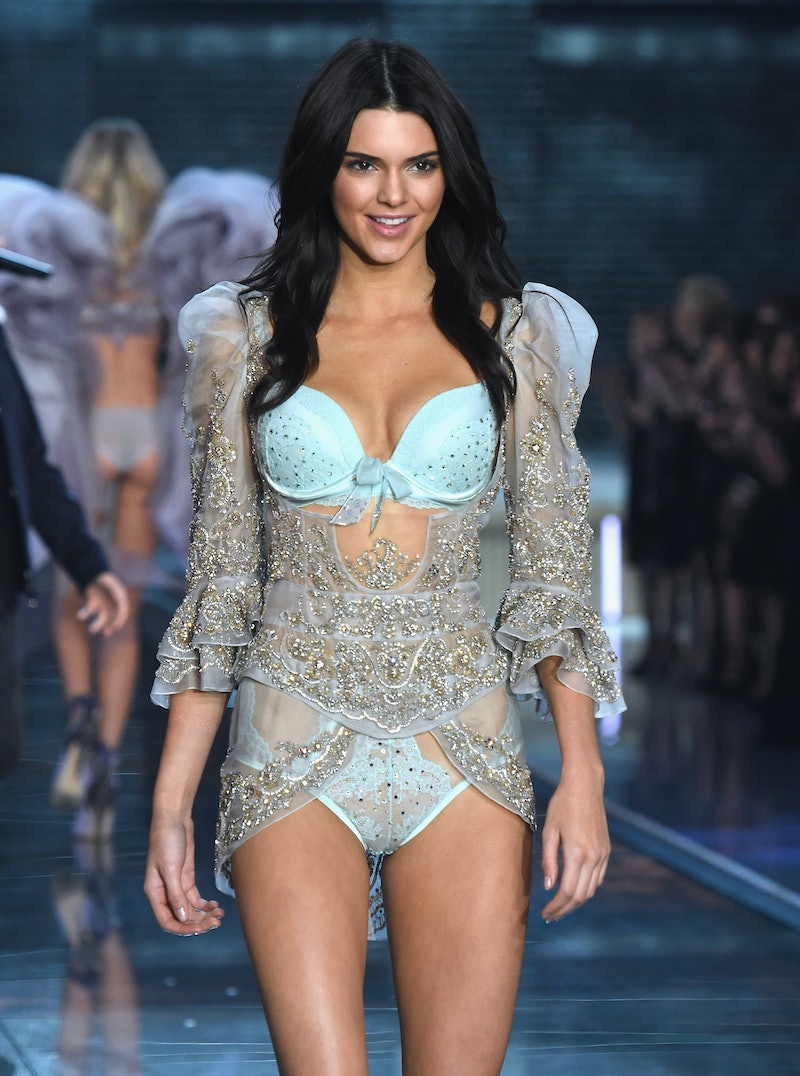 To say that Kendall Jenner's modeling career is successful is a gross understatement. From Chanel to DVF, the oldest Kardashian-Jenner daughter knows her way around the fashion world, and now, Kendall Jenner's Victoria's Secret debut has happened, and it was just as epic as expected.

This year's show was hotly anticipated because of its mega-watt stars such as Jenner and gal pal Gigi Hadid, who also showed up and showed out on the runway. While some have criticized Jenner and Hadid's inclusion, all commentary was silenced Tuesday night as Kendall stomped the runway in two absolutely stunning looks.

Last year, many were disappointed when Jenner chose to walk for Chanel with squad member Cara Delevingne rather than hit the catwalk with Victoria's Secret. This year, thankfully, no such conflict of interest occurred. Ever since Jenner's adorable Instagram announcement that she'd be walking with best friend Gigi Hadid, there's been a ton of speculation as to what kind of look she'd rock. The announcement, though, did come with critics — she's part of the Kardashian clan so it wasn't much of a shock. An argument was made that models like Jenner book high-profile shows due to their incredible popularity on social media and not because of hard work. In my opinion though, looking at images of Jenner on the runway, it's not a shock as to why she was chosen.

My first thought upon seeing the piece was how baroque it looked. The bright blues and tangerine shades were stunning, and the pattern on Kendall's train did totally remind me of the butterfly motif seen throughout the show.

With a photo like this, you can't tell me that Kendall Jenner didn't earn her place on that runway. Being social media savvy isn't a crime. She looks incredible in signature VS cheeky bikini bottom panties, and the craftsmanship of that corset is outrageous.

Peep that gorgeous silk lacing on the side. It's a stunning detail to the already incredible piece.

The bright ensemble wasn't the only one Kendall rocked though. Oh no, Jenner came out looking like Victoria's Secret's very own Cinderella.

Maybe it's the pale, ice blue of the bra and panty, but I am getting serious sexy Cinderella vibes. The Disney pin-ups would be proud.

That jewel-encrusted corset jacket was a serious work of art. It looked as if it were straight out of Versailles.

Kendall rocked signature VS waves during the show that blew back perfectly while she strutted the catwalk as The Weeknd performed.

Basically, Kendall slayed that dang runway, and I can't wait until we see her in wings.