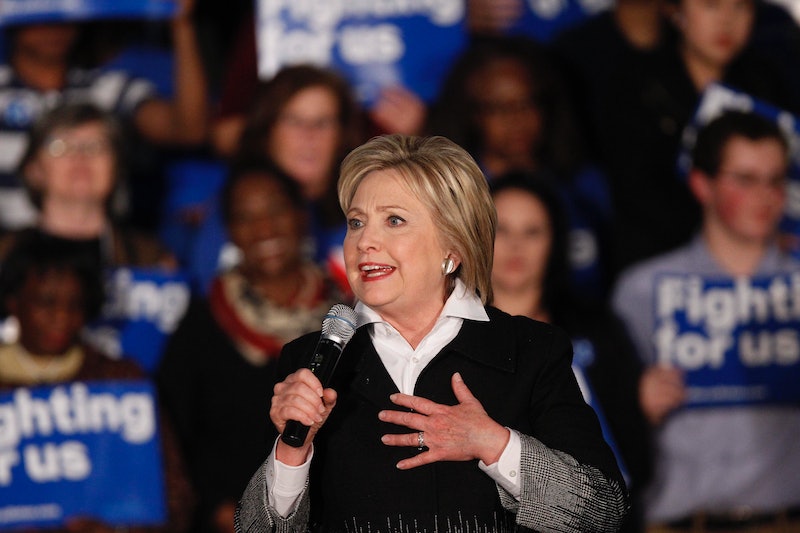 During Wednesday night's Democratic debate in Miami, Hillary Clinton refused to answer a question about being indicted for her email scandal while secretary of state. "Oh goodness," she said. "That is not going to happen. I am not even going to answer that question." Univision's Jorge Ramos tried to get the presidential contender to say who gave her permission to use a private server for her work emails, to which she responded that she didn't need permission because it had been done by her predecessors. He then asked if she would drop out of the race if indicted, and she blew the question off as too ridiculous to answer. She's clearly tired of being grilled about the email issue that's left a gray cloud hanging over her campaign and weakened many Americans' trust in her as a leader, so she tried to end the questions for good.

Though many people in and outside of Washington have called for Clinton to be indicted for allegedly mishandling classified information by using a private email server to send official messages for her job as secretary of state, law experts have said it isn't likely. "This is really just a political firestorm, not a criminal case," Stephen Vladeck, American University law professor and an expert on prosecutions involving classified information, told The Washington Post's Ruth Marcus.

Emailgate has come up in multiple presidential debates now, with both Democratic candidates still in the running saying it's a pointless conversation. In October, Sanders said: "The American people are sick and tired of hearing about your damn emails." Clinton's response Wednesday night was just as sassy and chasing after the same goal — putting an end to the email questions.

Clinton obviously doesn't plan on dropping out of the 2016 presidential race due to an indictment, because she doesn't plan on being indicted for her email server debacle. Her new strategy for dealing with questions about Emailgate is to simply refuse to answer them. Whether or not voters will see that approach as strong or deceitful will ultimately determine how much Americans will put their trust in her, at least when it comes to her use of technology and handling classified information.