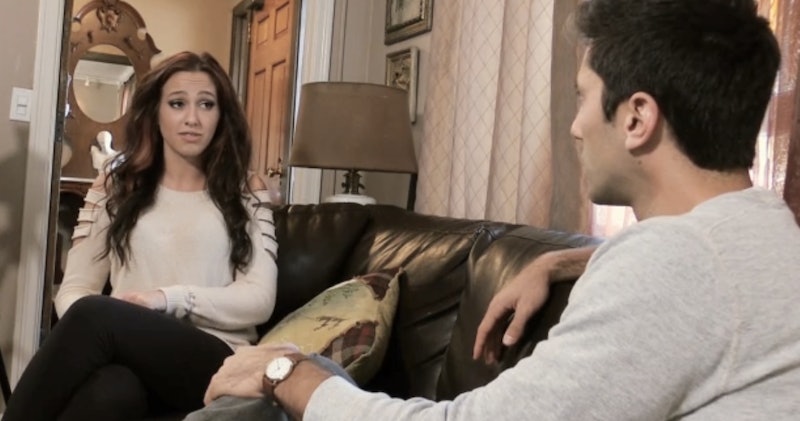 Since Catfish returned for the season, MTV has been bringing us pretty unique stories. Between the show's first triangle and a daughter looking to find answers for her mom, this season has been full of surprises. But on this week's Catfish , Leuh and Justin give us a story we've seen a million times before. Boy meets girl on Instagram, girl drives herself crazy wondering if boy is who he says he is. But fortunately, there's Nev and Max in this world, and that means this mystery is getting solved pronto. But after a little investigation, it became clear that this story is definitely different from the rest.

Although Leuh and Justin have been talking for a long time, they've never met... but not for Leuh's lack of trying. And as soon as he found out that Leuh had been in contact with MTV, he blocked her on Instagram. Seems like your typical case of Internet faker, but after searching around and talking to some of Justin's friends, the guy Leuh's been talking to is the real deal — except she's not the only girl he's been talking to. There's more to this guy than Leuh knows, even if he is the same person from his photos.

But even though there's a good chance this ends in heartbreak, Leuh decides she still wants to meet Justin and find out the truth. Unfortunately, when Nev and Max called him, he refused to meet her, specifically saying that doing the show is "not in my best interest" and opting out. But when has that ever stopped these two?! They decided to take Leuh to California to try to track him down anyway, because they are two completely fearless individuals.

So when they get to Justin's house, Nev goes up to the door (sans cameras) and is greeted by Justin's dad, Josh, who says Justin isn't home, but he wants to meet Leuh. Don't worry — it's not because she's been talking to Josh all this time; he just wanted to meet her. 24 hours goes by, and although Justin totally blows off Leuh's texts, his friend Todd is a bro (well, not to Justin...) and fills them in on his location. So what's his deal? Once they meet, Justin's immediately defensive, but does explain that he was just feeling nervous about meeting her and didn't want to be on the show.

So where do they go from here? After Max gave him a serious dose of sass by telling him he needs to treat this girl right, they agree to talk. Justin wants to start their relationship officially now that they've met, despite the distance, but Leuh's hesitant. In the end, the two month update proved that they actually were meant to be together. They're still dating, and Leuh is moving to California so their relationship can really get started. It's rare we hear a happy ending on this show, but it's good to hear things finally worked out for someone. It makes all those heartbreaking episodes worth it!

More like this
Paris Hilton & Carter Reum’s Relationship Timeline Includes A 2023 Grammys Date Night
By Bustle Editors
'Bachelorette' Vet Clare Crawley Revealed Her Stunning Wedding Photos
By Stephanie Topacio Long
Rachel Responded To 'Bachelor' Fan Theories About Her TikTok With Clayton
By Grace Wehniainen
Erika Jayne's Estranged Husband Tom Girardi Has Been Indicted On Fraud Charges
By Jake Viswanath
Get Even More From Bustle — Sign Up For The Newsletter
From hair trends to relationship advice, our daily newsletter has everything you need to sound like a person who’s on TikTok, even if you aren’t.