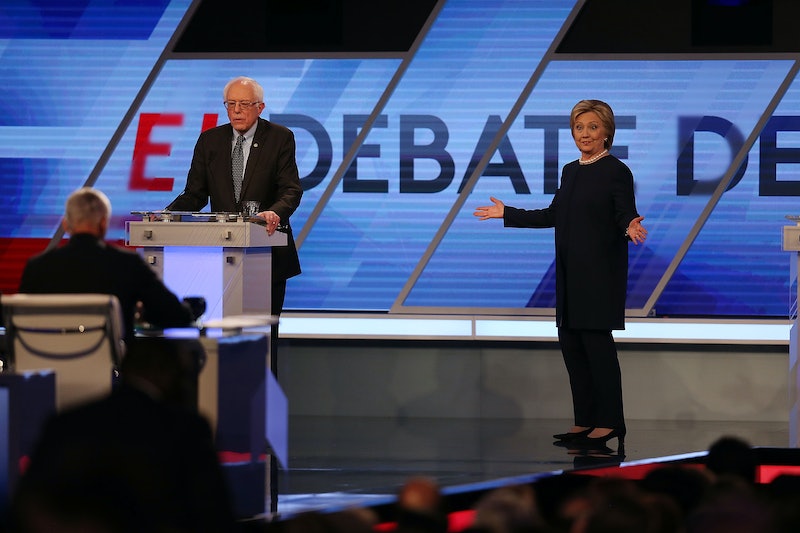 Wednesday night's Democratic debate in Miami may have featured the most heated conversation about climate change, at least in recent memory. While celebrating President Obama's climate change initiatives and the potential risks posed, particularly to Miami, by rising sea levels, former Secretary of State Hillary Clinton was interrupted by Vermont Sen. Bernie Sanders. She shut him down with a bold "excuse me" — the same line used by Sanders on Sunday in a different debate.

When asked about climate change toward the end of Wednesday's debate, Clinton promised to act on the initiatives that Obama has put into place during his time as president. This is a stark contrast to Republicans, who want to dismantle those initiatives, according to Clinton. As she spoke, though, Clinton's biggest threat wasn't from the other side of the aisle, but rather from the other side of the stage. Sanders attempted to interrupt her, but in true debate fashion, Clinton said, "Excuse me," a few times and moved on with her point when Sanders had retreated.

The moment may have gone largely unnoticed — I mean, honestly, how newsworthy is it that a candidate was interrupted at a debate? — had it not been for Sanders' similar comment on Sunday in Michigan. In that debate, Sanders said, "Excuse me, I'm talking," to Clinton when she started to interrupt him during a conversation about the 2009 federal auto bailout. For some, Sanders' comment was criticized as sexist.

Whether or not Sanders' comment on Sunday was sexist, it'd be hard to make the case that Clinton's comment on Wednesday was. If anything, Clinton was breaking the age-old gender stereotype that women don't ask for what they want. In this case, Clinton clearly wanted more time to speak on the issue in question, and that's exactly what she got.

Really though, the conversation about gender stereotypes should probably be removed from all debate analysis anyway, shouldn't it? After all, it's not necessarily news when a male candidate, on a stage full of men, fights for his right to continue speaking. Debates are made to spark a lively conversation between and among candidates — that's the whole point. Sure, there are buzzers and moderators to keep the candidates on track, but if the candidates didn't interact with one another at all, viewers would probably think something is wrong. Thus, debate behavior shouldn't necessarily be judged by the same norms as other everyday social interactions.