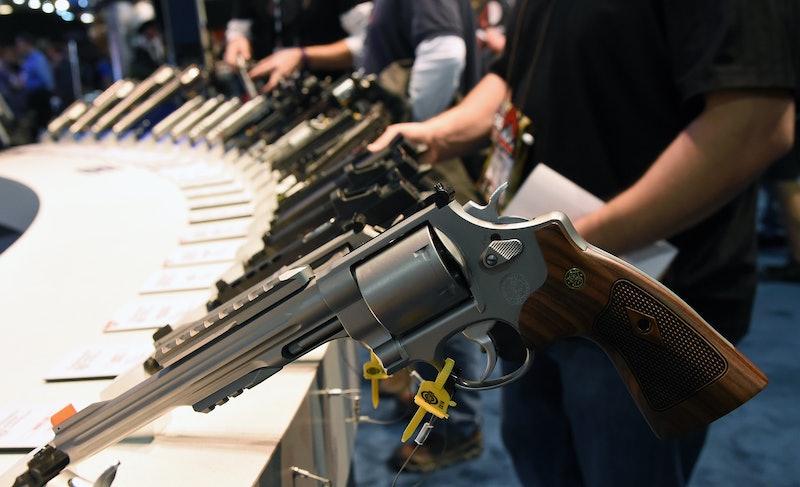 Law enforcement officials confirmed on Wednesday night that at least five people were killed and more injured in a mass shooting that took place in the Pittsburgh suburb of Wilkinsburg hours earlier. Community members who heard the attack told local news stations that more than two dozen shots were fired, while those who arrived at the crime scene afterward said at least 40 shell cases were found. Police announced that they believed two gunmen to be responsible for the attack, though no suspects had been apprehended as of midnight on Wednesday. As officials release further details on the circumstances of the shooting, the incident has once again drawn national attention to regulations on guns across the country. So what are Pennsylvania gun laws like?

Based on current laws, the gunmen responsible for the Wilkinsburg shooting wouldn't have been required to register their firearms in the state of Pennsylvania. On the website for the Pennsylvania Firearm Owners Association, an informational page states:

...in Pennsylvania it is actually illegal for any government or police agency to keep a registry of firearms...

The text continues, stating that if a person legally possesses or brings a firearm into the state of Pennsylvania, or legally comes into possession of a firearm in the state, no registration is required.

There are a few restrictions in the state that are of note. All private transfers of handguns must be processed through a licensed dealer or at the office of a county sheriff, and background checks are mandatory for private handgun sales. Background checks are not required for long guns.

And while general owner licenses are not required in Pennsylvania, owners must obtain License to Carry Firearms permits in order to carry concealed firearms or to carry firearms inside a vehicle. When it comes to openly carrying a firearm, the law is silent and therefore technically legal for owners in Pennsylvania. The only exception in this regard is in Philadelphia county, where a permit to carry a firearm is required whether or not the weapon is concealed.

So while there are methods in place for tracking the sales of certain types of guns in the state, regulations that monitor where exactly those guns end up and prevent gun owners from openly carrying firearms are very much absent.