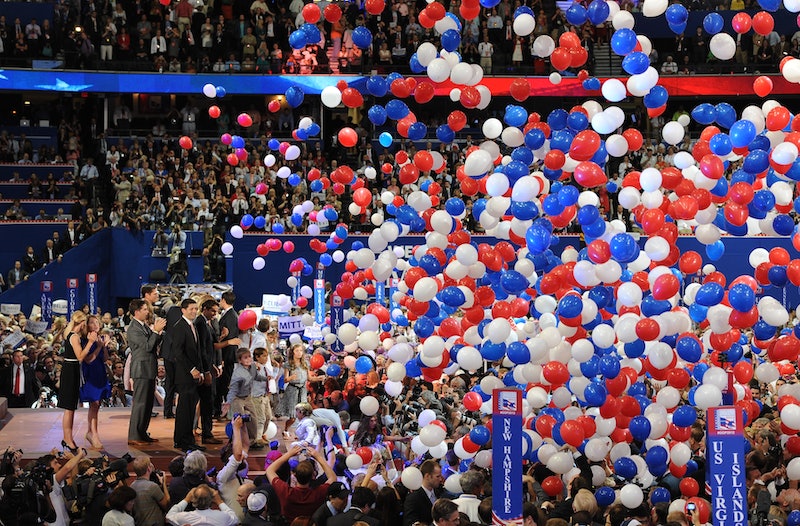 It seems that the GOP has finally woken up to the same nightmare haunting liberal America since Republican presidential candidate Donald Trump began spouting off at the mouth on topics as varied and offensive as building a wall along the Mexican border, stopping Muslim non-citizens from entering the country, and comparing same-sex marriage to choosing an odd golf club. The Republican establishment, just like the rest of us, is now ready to do whatever it takes to keep Trump from winning the nomination and imploding the party. Their reported solution: a brokered convention that would edge out Trump.

How would that work? Well, get your pen and paper because it's rather complicated with several phases and a fair number of "ifs." First of all, Trump cannot win the majority of the delegates before going to the convention. It needs to be contested. If Trump were to show up with just over 50 percent of the delegates bound to him, he automatically gets the nomination. He has not been winning more than 50 percent of the vote. He has been in the upper 40s but never met the halfway point. That may not matter, though, because as the race moves on more states are winner-take-all.

How To Get There

John Kasich will need to win Ohio and Rubio would need to win Florida — which is looking increasingly less likely. Both are among the large winner-take-all states, which means all the states' delegates go to the winner, even if the candidate just gets a plurality. Other states are hybrids, somewhat like South Carolina where the winner of each congressional district gets the district's allocated delegates. Trump won all the state's delegates. So step one in the path to a contested convention is making sure the other candidates get enough of the delegates to keep Trump under half.

First Round Of Voting: Delegates Are Bound

Once there, the delegates vote on who will become the nominee. The first round of voting, all the delegates are bound to the candidate they were assigned based on their state's primary. The GOP changed its rules this year to make the process more transparent, and as such, the Republican party doesn't have any superdelegates. The "unbound" delegates are the GOP version, but they are essentially bound — at least in the first round of voting. If in the first round, one candidate does not win a majority of votes — which would be known going in — the vote moves onto a second round.

In this round some of the bound delegates — essentially the normal delegates — are unbound or freed to vote for whomever they would like. In the second round a little more than half are free. The state Republican parties decide at what point their delegates are freed to vote for another candidate. In some it depends on the round and in others as soon as the candidate drops out they can change their support. For example a Jeb Bush delegate might be released before one whose candidate remains in the race like Rubio. In the third round 81 percent are free to vote for whomever they choose.

Besides the issue of some delegates being bound, it basically boils down to how long it takes for votes to coalesce around one candidate. The last true GOP brokered convention was in 1948, the year that New York Gov. Thomas Dewey won the nomination. There were three ballots, or rounds of voting. He received a plurality the first round, nearly half of the votes the second, and then the third round cemented his nomination with a unanimous vote. It could go longer though. In 1924, though, the Democrats had 103 rounds. In 1976 Gerald Ford didn't have enough votes heading in but he still won on the first round.

The Delegates Matter A Lot

In a brokered convention, the delegates matter quite a bit. When I say the delegates, I mean the actual people elected to fill the role. That's because as soon as they are released, they can vote for whomever they like. Some delegates are members of the party — about 7 percent (these are the unbound delegates). Others — about 17 percent — are selected by the candidates, which is an obvious advantage. The rest are elected in county and state GOP conventions that take place through the Spring.

There are a few other rules the GOP has in place. For example, the winning candidate has to have won eight states' contests. They could change this or any other rule between now and then if they thought it would make a non-Trump candidate's selection easier. That would mean there's the possibility that a "consensus" candidate could be introduced like Mitt Romney or even Speaker of the House Paul Ryan. Hard to believe but totally possible!

Stay tuned and watch those delegate counts. It could make for an interesting Republican convention.

More like this
Wait, Is Barney Stinson Related To Sophie On 'HIMYF'?
By Gretchen Smail
Eurovision Has Been Given A Whole New Look Ahead Of Its Liverpool Debut
By Bustle UK
Here’s Where The NHS Nurses’ Strike Currently Stands
By Sophie McEvoy
Pret & Costa’s Coffee Is The Strongest On The High Street, According To Which?
By Sam Ramsden
Get Even More From Bustle — Sign Up For The Newsletter
From hair trends to relationship advice, our daily newsletter has everything you need to sound like a person who’s on TikTok, even if you aren’t.