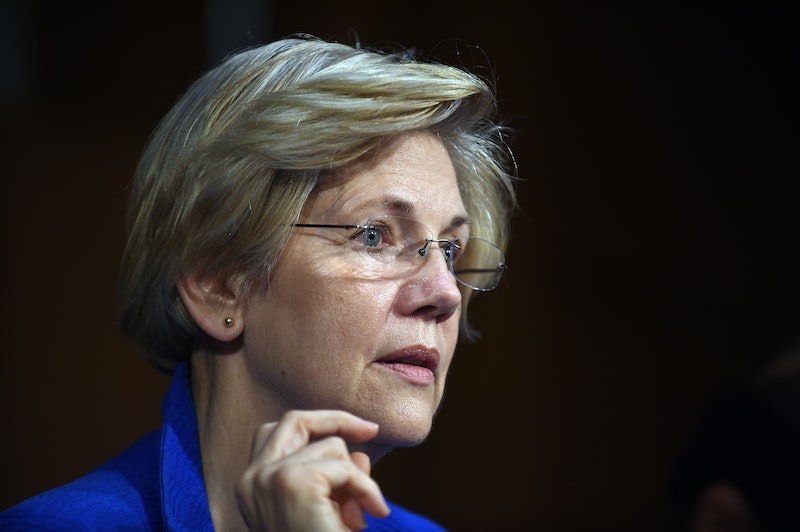 If Bernie Sanders wins the Democratic nomination, it's highly improbable he will select Hillary Clinton to be his running mate. Though nominees have historically, but not always, chosen to adopt the intra-party competition into their own camp, Sanders disagrees with Clinton's big business leanings and Wall Street affiliations on a fundamental level. More likely, Massachusetts Senator Elizabeth Warren could run alongside Sanders as his vice president if he snags the nomination. Though the two are known to have been longtime friends, Warren has yet to take a clear side in the Democratic race. Instead, she's keeping her options open.

On the Nightly Show with Larry Wilmore in early January, the show's panel asked Sanders whether he'd be willing to reveal his possible running mate candidates. Sanders lightened the mood by poking fun at the hosts' nosiness.

Now the last time I was here you got me to say that I was thinking about running and now you want ...

After some quick banter, the candidate was forthcoming with his thoughts. Sanders went on to openly explain why the Massachusetts senator would be a great fit for his campaign.

And the big news was revealed just like that. The month of March, however, threw some obstacles into the course of the potential Sanders/Warren partnership. On March 1, Sanders lost the Massachusetts primary by just 1.4 percent and walked away with one delegate less than Clinton. Sander's narrow loss in the state came as a shock, not only because Warren is senator of it, but also because it has an intensely liberal population and a large community of millennial college students — both of whom are Sanders' target populations. In a speech in Amherst before the election, Sanders, confident that he shared the same anti-Wall Street sentiment with Massachusetts, went out of his way to praise the state's senator. Unfortunately for the Vermont senator, it didn't inspire an endorsement from Warren.

What our campaign has been talking about is … that we have a rigged economy, something that your Sen. Elizabeth Warren has talked about. Thank you all for sending Elizabeth to the Senate.

Salon's Daniel Denvir suggested Warren intentionally endorsed no one so that she could play the field and simultaneously avoid creating more divides within her Democratic party during such a pivotal time. Though she has an ideological affinity to Sanders, it's possible that Clinton would also select her as a running mate to appease disappointed Sanders supporters. Needless to say, that's a huge opportunity for Warren, as well. So far, she's supported both candidates in some form or another.

At a New York speech in early January, Sanders mentioned the similarities between his and Warren's Wall Street reform plans and delivered his approval of Warren's proposed "21st century Glass-Steagall Act."

Let’s be clear: this legislation, introduced by my colleague Senator Elizabeth Warren, aims at the heart of the shadow banking system. In my view, Senator Warren, is right. Dodd-Frank should have broken up Citigroup and other ‘too- big-to-fail’ banks into pieces. And that’s exactly what we need to do. And that’s what I commit to do as president.

Many, including Boston Globe journalist Eric Fehrnstrom, have speculated that Warren will resist endorsing Clinton because it would be betraying her anti-Wall Street stance. Though the conclusion seems logical enough, the situation is much more complicated. For example, Warren wrote a Facebook post endorsing Clinton's New York Times op-ed on defending the watchdog Consumer Financial Protection Bureau in December.

Secretary Clinton is right to fight back against Republicans trying to sneak Wall Street giveaways into the must-pass government funding bill ... Whether it’s attacking the C.F.P.B., undermining new rules to rein in unscrupulous retirement advisers, or rolling back any part of the hard-fought progress we’ve made on financial reform, she and I agree.

When it comes down to it, avoiding any explicit endorsement isn't a decision on Warren's part. It's definitely in her best interests to stay on the good side of both candidates because either one or the other is going to take the nomination.