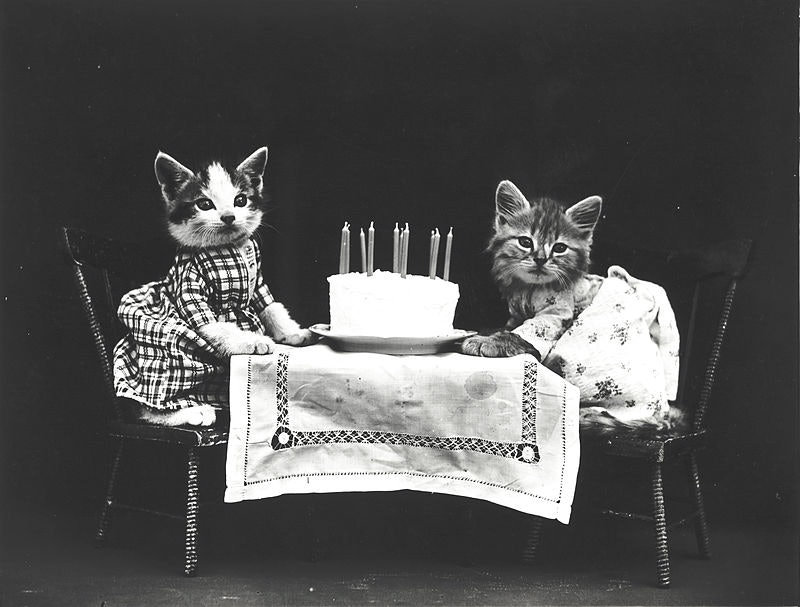 Frankly, modern birthdays don't have anything on the way birthdays have been celebrated in history. There were once beliefs about misbehaving ghosts, birthday cities, palindromes, and angry personal gods. It all makes the concept of an e-card rather bland by comparison.

Superstitions about birthdays continue to abound around the world, with their attendant ideas of luck and forecasting the year ahead. It's still actually common to have "birthday spankings" in some parts of the United States, like Utah, where it's seen as good luck to lightly spank children on their birthdays, once for every year of their age. And the entire concept of an astrological sign is based around the place your day of birth takes in the astrological calendar (I'm informed I'm a Pisces, though I have no idea what bearing that has on anything, frankly). Birthday beliefs and ideas are more prevalent in a rational age than you might think; but they still don't hold a birthday candle to the older school.

Here are five of the most bonkers ideas about birthdays from history, from public poem-giving to eating primroses. If you'll excuse me, I'll just be over here bleeding deliberately onto a napkin for good luck.

1. That You Needed To Appease Your "Genius" With Birthday Gifts

For the ancient Romans, "genius" didn't have the same meaning it has today (somebody of immense intellect, or the quality of being unbelievably brilliant). For them, a genius was a kind of personal god, rather like a guardian angel or the best parts of yourself in holy form. Kind of like a soul, but more volatile: because geniuses needed to be respected, particularly on birthdays, when they were lavished with nice gifts.

It wasn't cake, though: traditionally, gifts to one's genius on one's birthday involved more fragrant godly offerings, like wine, garlands of flowers, or incense. The Roman Emperors tended to use this sort of worship to make themselves into cult figures after they died; people worshipped the genius of the Emperor Augustus all over the Roman Empire long after he'd kicked the bucket.

(The Greeks had their own weird way of embarrassing everybody on birthdays: a genethliacum , or a poem devoted to somebody on their birthday, which it seems was often expected to be read aloud to the birthday-haver with huge pomp and ceremony. And you thought having the staff at the local Olive Garden chorus "Happy Birthday" at you was mortifying.)

Contemporary Russians, rather like Germans, view it as heinous bad luck (or just bad manners) to wish somebody happy birthday before the day itself, or to celebrate it early. But there appears to be an interesting folkloric tradition (though I've been unable to trace where it came from) that indicates that Russian ghosts were traditionally viewed as pilferers who'd take family possessions if somebody in the family misbehaved. They'd return the item, if properly placated, on the week of the misbehaving person's birthday.

One suspects this may have been concocted by Russian parents trying to get small children to behave by mysteriously "vanishing" family objects and blaming offended ghosts, but it's rather sweet nonetheless.

3. That You'd Be Lucky If You Ate Primroses Or Deliberately Bleed

A hilarious, and highly unreliable, 1903 book called the Encylopedia of Superstitions, Folklore, And The Occult Sciences Of The World, alleged to have collected superstitions from both its home country of England and around the world, and its section on birthday luck is a doozy. According to the eminent editors, good luck will ensue on your birthday if you eat primroses (which, as it happens, are harmless and now enjoying being en vogue as edible cake decorations), or sample some duck eggs dyed deep red. Apparently birthday cakes at this time were also baked with a ring inside them, and the person who received the ring in their slice would be the next to marry.

That's not the end of it, though. A windy birthday means poor luck, dying on your birthday means that your soul has likely been saved, and it's seriously bad luck to give a birthday gift to a sick person, because they'll likely not see the next one. The goriest tradition of the Encylopedia, though, has to be the one that's supposed to guarantee luck for the year ahead, which involves pricking your finger, letting three drops of blood fall on a handkerchief, and then keeping it on you all year. Try explaining that on a first date.

4. That Your Birth Should Be Accompanied By Palindromic Charms

Medieval Europe was a particularly hazardous place to give birth: death in childbirth was common and pregnancy notoriously fraught with danger. If you wanted to guarantee a safe birth, you took good precautions. Like, say, carrying around a "birthing bag" full of charms (including a baby's caul), or reciting palindromes to encourage the baby out.

"Birthing bags" were meant to encourage your birthday to come quickly and painlessly for your mother, but they could contain some thoroughly bizarre items. The Encyclopedia of Motherhood reports that they often contained a weird mix of religious items and older, pagan charms and amulets, but by far the best way to guarantee a safe birthday has to be what Margaret Schaus mentions in Women And Gender In Medieval Europe : yelling to the child in palindromes. Either inscribed or recited, the Latin-ish charm Sator Arepo Tenet Opera Rotas was meant to make birth easier, presumably because it made no real sense and utterly confused both mother and baby until the birth was over.

5. That You Weren't Anybody Until A City Was Built To Align With The Sun On Your Birthday

This is a hilarious one that indicates just how modest modern politicians are in comparison to ancient ones. Donald Trump might have a real estate empire, but did he have an entire city built to celebrate his birthday? I thought not.

In 2012, researchers found that the ancient Egyptian city of Alexandria, established during the rule of famous Macedonian leader Alexander The Great, seems to have been built so that its main orientation would exactly line up with the rising sun every year on Alexander's birthday. Apparently it also perfectly aligned with an astronomical phenomenon known as "the King's Star," which is part of the Leo constellation and also rose every year at around the time of Alexander's birthday celebrations.

I got some earrings for my birthday this year; I'm now frankly a bit affronted that nobody built an entire metropolis to align with the sunrise of my glorious birth-anniversary.