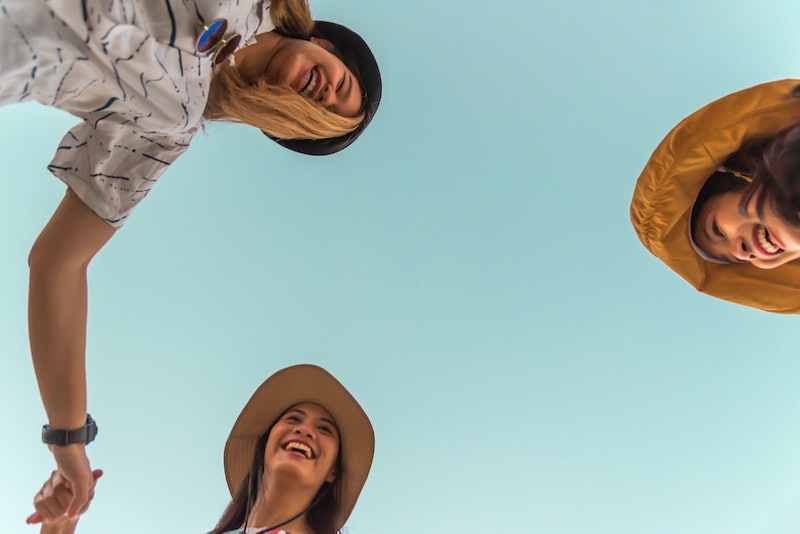 First, let me get this out of the way: I'm not polyamorous. But I've been privileged to know many poly people throughout the years, from a monogamous girl negotiating life with a polyamorous partner to another with two concurrent romantic relationships and another with a series of shifting romantic and sexual alliances. And those relationships have let me in on some of the real myths about polyamorous life, from the merely annoying to the seriously damaging.

Here are the facts, in brief: polyamory is not clutch-your-pearls shocking; it's more common than you think (about five percent of all Americans are in a polyamorous arrangement at any given time, according to one statistic); it's not lying or infidelity; and it's not a writhing pile of bodies who can't find fulfillment in a "traditional" relationship. A lot of our ideas about polyamory are born from fear, media sensationalism, preconceptions about human relationships from the monogamy tradition, and misunderstandings. And that, frankly, makes life unnecessarily difficult for people who are just expressing a romantic and sexual preference that does its explicit best to harm nobody.

As for "how does polyamory work?!", the typical answer, if you're wondering, is "lots and lots of communication." When it comes to these seven other myths, though, busting them takes a little less commitment.

Myth #1: That It's The Same As Polygamy

Let's get some words correct, shall we? Polygamy is the practice of multiple marriage partners; technically speaking, it can actually be divided into polygyny (one man, many wives) and polyandry (one woman, many husbands). Polyamory can include married partners, but as a term, it's focused on the multiple romantic and sexual relationships between individuals. The BBC's handy definition is "the practice of having simultaneous intimate relationships with more than one person at a time, with the knowledge and consent of all partners."

The ending -gamy refers to marriage; we've become confused on this point because people tend to use "monogamy" as a general word for partnered romantic relationships, where it does actually strictly refer to marriage. (It's cool, though, because it's common usage.) Polygamy, as in Sister Wives, is not the same thing. (Incidentally, "exogamy" refers to marrying somebody outside your tribe or context.)

Myth #2: That It's Basically Cheating

It's a mistake to think, as we'll discuss in a minute, that there's no such thing as a betrayal of trust in a polyamorous relationship; there definitely can be. But the people in every genuinely polyamorous arrangement attempt to be honest, often at great length, about what's going on with each partner, and in that sense it's basically the opposite of infidelity.

The point is that the normal "monogamous contract" of constant emotional and sexual fidelity within a two-person relationship isn't here. Having relationships with several people who are all aware of the situation and give their blessing is a world away from secret liaisons conducted away from the sight of a primary partner. It actually requires a ton of communication and trust.

Myth #3: That Everybody Has Sex With Everybody Else

There are two elements to bust in this myth. One is that polyamory is always primarily about sex, and the other is that everybody involved in a polyamorous relationship is having sex with all the other members. As was made clear in a myth-busting series in Nylon, polyamory can involve a huge range of relationships, from the intimate but non-sexual to group sexual situations, and it's not just a way for voraciously sexual people to "get their fill".

The other myth here is that the arrangements are always one pattern (relationships between all partners), which isn't the case at all. Polyamorous arrangements do not require every person involved to have a romantic or sexual connection to everybody else. They can come in many shapes and sizes, and shift in both.

Myth #4: That Everybody Involved Is Polyamorous

This is an interesting misconception and it's not the truth. Polyamorous people do indeed occasionally have people in their arrangement who aren't poly themselves, but are prepared (to varying levels that are obviously negotiated) to "share" the person with whom they're connected. This can end poorly, obviously, but it's not as rare as you'd think.

There's an accompanying misconception that all polyamorous formations work in one way: people having "primary" partners (a spouse or foremost emotional and romantic connection) and then "secondary" partners. This is one arrangement, but it's not the only one, which is important to realize if you want to understand the full breadth of polyamorous possibility. The Atlantic calls it the "jellyfish" of sexual preferences, which is a bit snide but actually kind of accurate.

Myth #6: That Nobody Feels Jealous

Mic called this the "biggest misconception" about polyamory in general. The difference, according to the experts they consulted, is that jealousy, for the polyamorous, is discussed with the ultimate aim of channelling it into the particular emotional practice of compersion. Compersion is the active decision to gain happiness from a partner's happiness with others, rather than feeling a deprivation from it. But that, as many polyamorous people will identify, doesn't happen all the time, and feelings can definitely be hurt, particularly if there's a betrayal of trust. We've all been drilled to believe that one person can be our everything, and that if they go elsewhere it's a response to our deficiency; transforming that fear and blame into compersion can take serious work.

Myth #7: That There Isn't Genuine Love Or Satisfaction In Poly Relationships

This is linked to the myths of sexual voraciousness and endless cheating that dog polyamory. The idea that polyamorous connections are somehow "deficient" and that the people involved in them can't truly love their partners or ever really be satisfied is both insulting and dangerous. Plus, the science directly contradicts it. A 2014 study of polyamorous people with two concurrent romantic relationships found that they reported exceptionally high feelings of "need fulfillment and satisfaction;" in other words, they were blissfully content, not constantly on the lookout for more.

Psychology Today also did a roundup of studies on polyamory and happiness, and found that monogamy has no real benefits that privilege it over polyamory, and that children raised in polyamorous situations are just as stable and happy as monogamously raised ones. (Other studies have found that polyamorous people tend to have advanced education, often Masters or PhDs, interestingly enough.)

The notion that polyamorous people are somehow romantically or sexually insatiable is just as unrealistic as the idea that all people should be completely satisfied with monogamy. It doesn't do any justice to the diversity of human relationships and needs, and it's frankly silly.

More like this
Are Leo & Capricorn A Good Match?
By Kristine Fellizar
Expert Tips For Being On Top When You're Plus-Size
By Lexi Inks
What Is The Forest Personality Test? The TikTok Trend, Explained
By Georgina Lawton
Are Leo & Leo Compatible In A Relationship?
By Kristine Fellizar
Get Even More From Bustle — Sign Up For The Newsletter