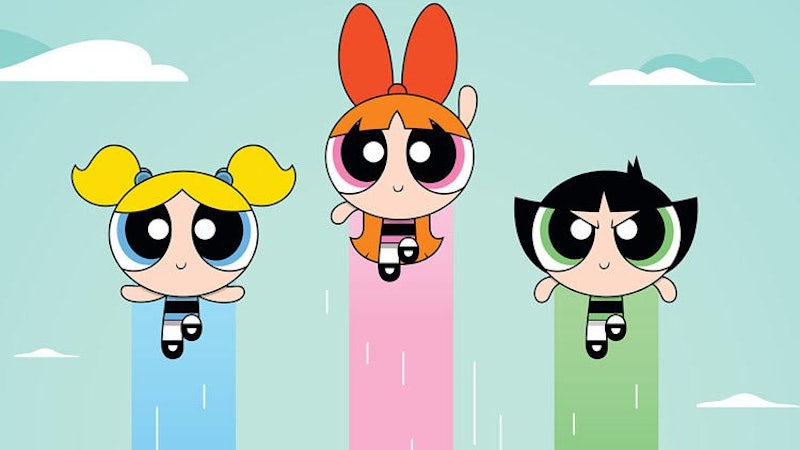 It is 2016, and the Powerpuff Girls are making their TV comeback, which seems about right. The reboot of the classic Cartoon Network series, which will officially return to television on April 4, was always way ahead of its time when it came to representing female empowerment. Re-watch the show as an adult, and you'll quickly realize just how feminist the Powerpuff Girls were, taking on the bad guys before they settled down for bed. Despite being kindergarteners, they were always much smarter than their adversaries, who were often adult males. But knowing Blossom, Bubbles and Buttercup are getting a reboot just makes me think about all the other female cartoon characters who could use a revival that highlights their female power.

These 11 female characters weren't really given a chance to be three-dimensional when they first appeared on television. Sometimes it was because they were relegated to supporting status on cartoon shows focused on their male counterparts, and sometimes it was because they were celebrated more for their looks than their strength and power. Sad, but true, since a quick Google search reveals how many of the animated women below land on lists of the sexiest female cartoon characters.

To re-write history a bit, I came up with idea for how these female cartoon characters could be given the Powerpuff Girls revival treatment. By just making a few pro-feminist tweaks to their story-lines, these characters get a second chance to be the female heroes we always knew they were.

Betty Boop was never a character that was taken seriously — at least not for anything other than her bombshell looks. When she first appeared on the scene in 1930, she was the caricature of a flapper who had more heart than brains. In 2016, Betty's sexuality could be on display in a way that makes her a strong female who isn't interested in the male gaze. Perhaps with a more mature take on the character that focuses on her being a single girl in the city. Think of her as the cartoon Carrie Bradshaw.

2. Jem and The Holograms

From 1985 to 1988, Jem and her band the Holograms were truly outrageous, but, in 2016, the lead singer could focus more on her computer skills. Her rock star persona was created by a holographic computer called Synergy, which Jem, real name Jerrica Benton, was in control of. Perhaps, this new take on Jem could become a female-led Mr. Robot, taking down corporations one computer hacking at a time. It's sure to make you totally forget about last year's live-action film based on the cartoon.

He-Man's twin sister Princess Adora, better known as She-Ra, was strong, kind and intelligent, but most couldn't get beyond her good looks. In a She-Ra: Princes Of Power TV revival, I suggest taking a cue from Supergirl on CBS, which stresses the fact that she's powerful enough without her super cousin. She-Ra doesn't need He-Man; she's already got her Sword Of Protection and her beloved flying steed.

The Flinstones focused on Fred and Barney most of the time, with their wives Wilma and Betty being there to take care of the home and the children. But, in a revival of the series, what if Wilma and Betty are the ones going off to work after Fred and Barney get laid off from the Slate Rock and Gravel Company? Keep them in the Stone Age, but treat them like Rosie the Riveters, who bring home the bacon and cook it too.

5. Josie and the Pussycats

The original Riverdale crew, who hung out with Archie and his gang, spent their days making sweet music and solving crimes. But, in a revival, Josie, Valerie and Melody don't just have to be pro-bono sleuths; they could be high-powered lawyers, taking on cases during the day, while still making time to play music. Think of this as an animated version of CW's Crazy Ex-Girlfriend, where music helps further the plot, which is always solved in a court of law by Josie and her two friends.

Hey Monie!, the BET and Oxygen series, which premiered in 2003, was way before its time and gone way too soon. Simone, who goes by the name Monie, is a single black woman, who works as a publicist in Chicago. The series gave viewers a different perspective than was usually on TV at that time: young, black female. To update this series, there could be more talk about what is actually going on in America, taking on the big issues not unlike Samantha Bee. From Black Lives Matter to the power of Beyoncé to the presidential candidates, Monie can give an honest opinion on the topics black women aren't always given air time to speak about.

Carmen Sandiego was always so mysterious, flying around the world committing crimes, but was treated like a supporting character that we rarely got a chance to know. In a reboot of Carmen Sandiego, her backstory would get to be the focus and we could finally how this once petty thief became public enemy No. 1 for the ACME Detective Agency. Carmen Sandiego has always been the villain, but this series would ask if that's really the case. What if we've been wrong about her all along?

The X-Men series, no matter which one, always seems to be focused on the same couple of characters. Storm isn't one of them. She always seems to get a raw deal, relegated to a supporting role. We've seen Wolverine's origins in his own movie; why not give us Storm's origins in her own TV series? Being the daughter of a tribal princess in Kenya sounds pretty bad-ass.

Back in 1997, the world was introduced to Pepper Ann, a stubborn redhead who often made the wrong decision only to find the solution wrapped in a moral lesson. She was a spunky Saturday morning cartoon star, who once flashed her bra when her gym teacher said she needed more "support." (She actually meant a buddy to spot her, not an undergarment.) A Pepper Ann revival would flash forward to her as an adult who is still struggling to make the right decisions, learning lessons along the way. This adult Pepper Ann could deal with the right way to ask for a raise at work to breaking up with someone. Things all women deal with, now in cartoon form.

Catwoman has always been Batman's nemesis, and, when she did get her own movie, it was just awful. But that shouldn't deter anyone from giving Selina Kyle another chance to shine on her own. The Fox series Gotham is showing how a young cat burglar named Selina Kyle becomes one of Gotham's most notorious villains, but Catwoman's adult side-stories scream for attention. A revival should take on the question of morality and whether Catwoman is really bad, good or somewhere in-between. In the '70s, she was a woman in an abusive marriage, looking to get out through her skills picking locks, for example. Catwoman is an anti-heroine who has her rooting for and against her sometimes simultaneously, not unlike Walter White on Breaking Bad.

The lone female in the G.I. Joe series, she's always been cast as the femme fatale. In a 2016 version, I'd love to see this woman become a real character. They already set this story in motion in the live action G.I. Joe movie, The Rise Of Cobra, by making her a villain turned heroine, but a series gives time for her story to grow. Baroness, born Anastasia Cisarovna, is described as a woman of contradictions, who once sided with the Americans and then turned against them after they killed her brother. This sounds like The Americans for an animated audience.

With an update, these female cartoon characters become more empowering than they were allowed to be when they first hit screens. In short, they become more like the complex women we want to see on TV — even if they're not real.