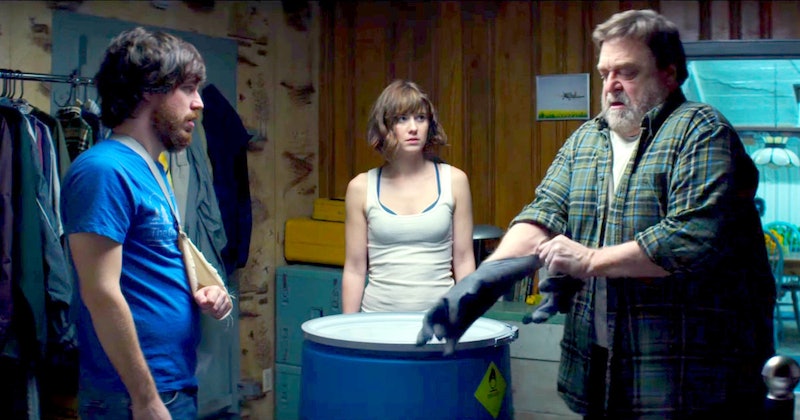 If you're reading this and haven't seen 10 Cloverfield Lane, back away now — I am not going to be the person who spoils one of the most mystery-shrouded films in recent years for some too-curious-for-their-own-good fans. Step away from the internet, buy some tickets, and go see the movie — trust me, it's worth it. OK, all set? Well then let's start talking about the 10 Cloverfield Lane ending, which, as you hopefully now all know, has a lot going on and needs to be discussed.

OK, one more time, major spoilers ahead.Now, let's get into that ending. For the majority of the movie, Michelle (Mary Elizabeth Winstead) is trapped against her will in an underground bunker with Howard (John Goodman), the creepy doomsday-prepper who thinks he "saved" her from an apocalypse, and Emmet (John Gallagher, Jr.), Howard's former employee. At the beginning, a terrified Michelle thinks that Howard is making it all up and tries to escape, but soon realizes that he may just be right; she and the men may actually be some of the only people left alive. Yet after some startling discoveries (like the word "help" scratched onto a window and a photo of Howard's daughter who, it turns out, is someone else entirely), Michelle and Emmet plan an escape for real. They work on making a gas mask to protect them in the outside world if Howard's claims that the air is dangerously polluted are true as well as stealing their captor's gun, but Howard finds some of their supplies. And that's where things get interesting.

When Howard confronts the duo, Emmet takes the fall, and although Howard accepts his apology, he shoots him, much to Michelle's shock and horror. Afterwards, having seen what Howard's truly capable of, Michelle finalizes the escape plans, yet things go awry when Howard sneaks a peek at some of her supplies hidden in her bedroom. Knowing she's about to be found out, Michelle runs out of the room and, when Howard chases after her, spills acid on him, severely injuring him. As she runs to the door, he continues to follow her, but due to some quick thinking and heavy items, she manages to keep him away — and then, finally, leaves the bunker and enters the outdoors.

Yet she's not out of danger quite yet. Outside, Michelle, in her gas mask, frantically tries to leave the property, but is delayed due to two major things: a rip in her suit that causes her to realize the air might not actually be dangerous, and, more pressingly, the sight of alien-looking spaceships above her. The next few minutes have her running away from terrifying creatures, avoiding the spaceships, and seeing both the bunker and the house totally blow up, killing Howard if he weren't already dead. Hiding from a monster in a shed, she encounters the dead body of the woman who, earlier in the film, begged her for help. Basically, it's total chaos.

Eventually, though, Michelle, while trapped in a car and dealing with a Jurassic Park-like scene in which she screams as monsters attempt to flip the vehicle and/or get inside, comes up with a plan. She makes a Molotov cocktail out of a lighter, liquor, and newspapers that she throws into the monster's mouth, causing it to retreat. When she's finally safe, she drives away, but she stops short when the car's radio finally connects and she hears the announcer giving listeners two choices: drive towards Baton Rouge for safety, or towards Houston to help out survivors. After a moment's hesitation, Michelle drives towards Houston — and that's how 10 Cloverfield Lane ends.

Pretty crazy, right? Sure, if it weren't a J.J. Abrams-produced movie — you can't expect anything but total insanity from the guy behind The Force Awakens, Lost, Super 8, and, of course, the first Cloverfield. This guy knows how to make one hell of an ending, and you can expect 10 Cloverfield Lane's conclusion to be one of the most talked-about finales of any movie this year.

More like this
The Time Traveler’s Wife Book Has A Heartbreaking Ending
By K.W. Colyard
This 'Hunger Games' Alum Will Star In A New Medical Drama Titled 'A Mistake'
By Alyssa Lapid
One Powerful Quote In 'Doctor Strange 2' Is Going Viral On Twitter
By Alyssa Lapid
Michael & Kathleen Peterson’s House From ‘The Staircase’ Has New Owners
By Kadin Burnett and Kayla Blanton
Get Even More From Bustle — Sign Up For The Newsletter