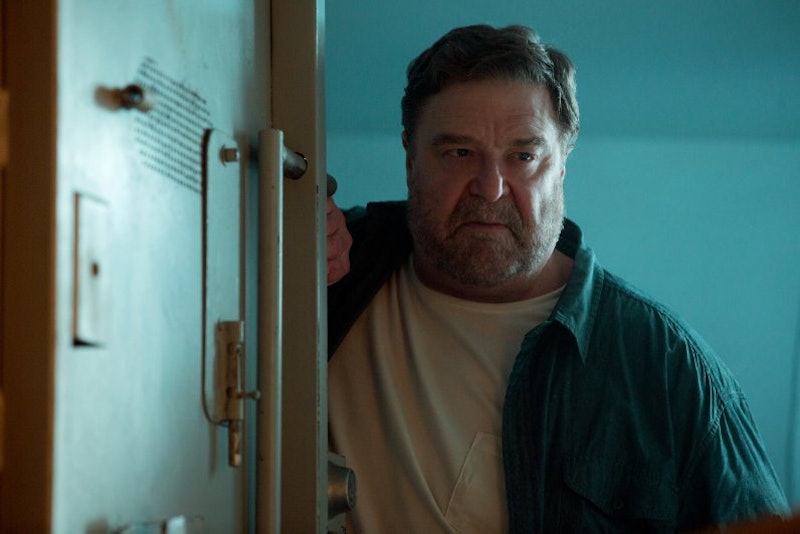 In the new sort of-sequel to Cloverfield, 10 Cloverfield Lane, a number of theories have arisen as to who or what the monster in the film is. Is the monster from the first movie still wreaking havoc? Did a chemical attack on said monster result in a zombie apocalypse? Is John Goodman the monster? That last theory, while the most unorthodox for a monster movie, seems to be the most popular, but how realistic is it? Could it really be that the sequel to Cloverfield doesn't feature a giant, other-worldly monster, but instead focuses on the monstrous aspects of humans? Is the theory that John Goodman is the monster in 10 Cloverfield Lane actually right?

Judging from the movie's trailers, it definitely looks like Goodman is at least the main antagonist of the film, if not technically the monster. He plays a doomsday prepper named Howard who essentially kidnaps a woman named Michelle (Mary Elizabeth Winstead) after she gets into a car accident, chains her up in a bunker, and tells her that he saved her life due to a chemical attack outside that left everyone else dead. But is he telling the truth? The trailers certainly leave open the possibility that Howard is just insane and there is no chemical attack, and even if there were, what kind of person has this super well-stocked bunker all ready to go? Even if he's not being disingenuous and shady, he's at least nuts.

Producer J.J. Abrams has admitted that there is a literal monster in the film, so that means that unless Howard is an alien in disguise (which I doubt), there is another threat lurking in the movie. But even if there are real aliens or zombies or whatever, I still think they will merely provide window dressing for the real "monster" — Howard. And given how the first Cloverfield movie only showed glimpses of the monster, I think 10 Cloverfield Lane will likely go the same route. There may be actual monsters outside the bunker, but viewers will likely see very little of them, and should be more concerned with Howard menacingly holding Michelle against her will, without clear motivations. The film's director, Dan Trachtenberg, more or less backed up this theory in a recent interview with Screen Rant, where he compares Howard to the monster from Cloverfield , and labels the human as the more frightening of the two.

"I think Howard Stambler is uniquely terrifying in that you don't really know... and this movie is specifically all about the fear of the unknown. When I saw Cloverfield, certainly terrifying to be chased by a giant monster, but you sort of know what that is and you know what the rules are, in some ways. You know if you can run far enough or get underground you might be protected, but Howard, even if you're underground, if you're with him, you never quite know what could be happening. And you can't totally reason with him, which is a little scary."

However, it seems so obvious that Howard is the main monster in the film, that I'm starting to think that maybe I'm having the wool pulled over my eyes. Abrams does love a good twist, after all, and with Howard clearly being positioned as the villain, a part of me thinks that it's all a little too on the nose. The trailer makes sure to show a flash of Howard's gun on his hip, a scene of him slamming his fist on the dinner table, and many disturbing glances from him; so clearly they want viewers to think that he's the monster. Therefore, maybe he's not the monster after all. Maybe his reasons for what he's doing are just, and whatever supernatural threat is outside the bunker is the movie's main monster.

Based on the evidence I've seen though, I don't think it's a trick. I think that John Goodman plays the real monster in 10 Cloverfield Lane, and even though the movie may feature additional monsters in the more traditional sense, it's likely Goodman that will leave audiences terrified.

More like this
Grey's Anatomy Fans Are Worried They Figured Out The Sad Reason Japril Returns
By Brad Witter
What Does Doctor Strange’s Third Eye Mean?
By Arya Roshanian
Elizabeth Olsen's Chris Evans Friendship Update Was Accidentally Hilarious
By Grace Wehniainen
Wait, Did Wanda Die In 'Doctor Strange And The Multiverse Of Madness'?
By Arya Roshanian
Get Even More From Bustle — Sign Up For The Newsletter