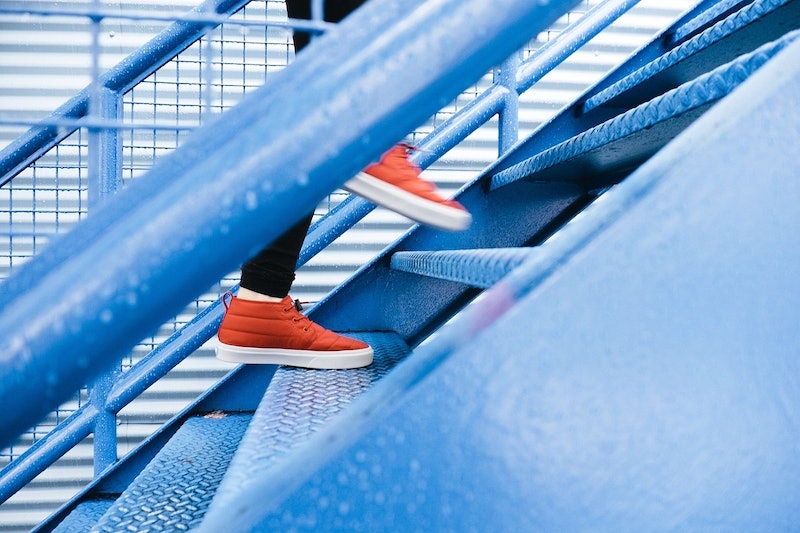 If you want your brain to retain that youthful glow, stay in school and take a pass at the elevator. A recent study published in the Neurobiology of Aging, found people who take the stairs have “younger” brains, as do people with extra years of education. Encouragingly, these results suggest that maintaining simple habits can have a big impact on brain health.

Scientists from the PERFORM Centre at Concordia University in Montreal, led by Jason Steffener, used magnetic resonance imaging (MRI) to analyze over 300 people’s brains. The participants were healthy, ranging in age from 19 to 79. As brains get older, they lose grey matter, so the scientists were able to track a brain’s “age” by measuring it’s volume of grey matter. More grey matter means a “younger” brain; a brain with a lot of grey matter loss is considered “older.” When the researchers looked at their subjects’ brains age alongside lifestyle habits and history, they found that, for each year of schooling a person had completed, his or her brain looked almost a year younger. Each daily flight of stairs the subject climbed decreased brain age by almost six months. In a press release, Steffener explained, “This study shows that education and physical activity affect the difference between a physiological prediction of age and chronological age, and that people can actively do something to help their brains stay young.”

In the article, Steffener and his co-authors admit that there are limitations to their results. For example, although this study supports previous theories that experiences like education and exercise can positively impact brain age, it’s possible that things are actually working the other way, and that people with large brain volumes (i.e. more grey matter to start with) are naturally inclined to exercise and seek out education. Nevertheless, the idea that we can maintain and even improve brain health by doing something as simple as using the stairs is exciting. “Every day we're assessed with the choice of taking the stairs, taking the elevator, taking the escalator,” Steffener told the CBC. “So it's something that can easily be added to our daily routine.”

We already know that taking the stairs is a simple way to add to our physical fitness; we can regard its effect to our brain age as an added benefit. “There already exist many ‘Take the stairs’ campaigns in office environments and public transportation centres,” Steffener explained in a press release. “This study shows that these campaigns should also be expanded for older adults, so that they can work to keep their brains young.”