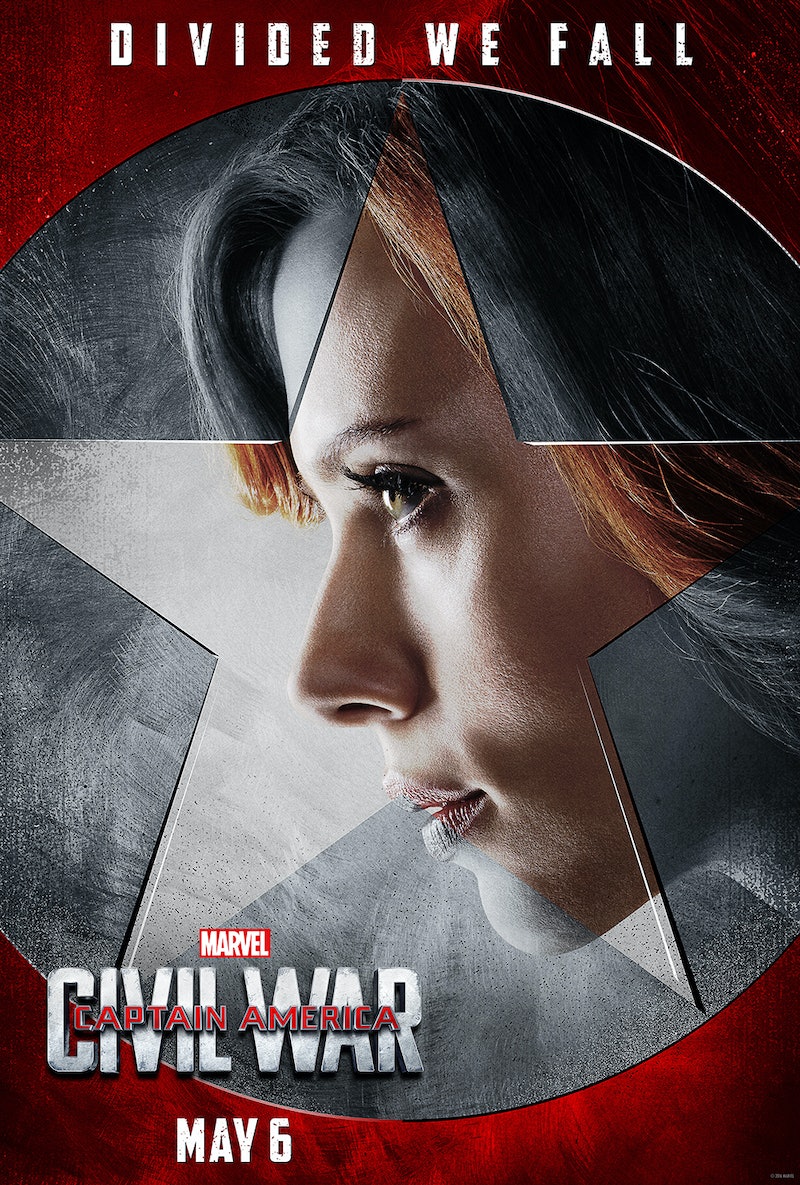 While the world patiently waits for a Black Widow movie of its own, Scarlett Johansson will take on the role once again in Captain America: Civil War, the forthcoming action film that pits Captain America against his former friend, Iron Man. The third film in the Captain America series, Civil War picks up where the last film left off and begins with a few big debates: Should the government be able to regulate superheroes' actions? Who is responsible for the damages of their last epic battle? Should the government also hold Bucky, Cap's assassin friend, accountable for his damages? As you might've guessed, Steve and Tony have opposing viewpoints on these matter, and their friends are forced to take sides. But just whose side is Black Widow on in Civil War ?

Earlier trailers and new posters for the film show that many members of the team are forced to pick sides in this very heated battle, with each headlining superhero keeping his or her posse close at hand. Fans of Black Widow might wonder where the powerhouse hero stands in this mess, and a new trailer for Captain America: Civil War released on Thursday shows two different sides of the character, alluding to the tough decisions she must make while caught in the middle of Captain America and Iron Man's fight.

In one clip, Tony says to Black Widow, "They're coming for you." She storms away from him, glaring as she says, "I'm not the one who needs to watch their back." Of course, she could be referring to the team of superheroes led by Captain America, but she could also be conveying her own animosity towards Iron Man. This could be the movie where we see Iron Man go fist-to-fist with Black Widow. I, for one, would be cheering for ScarJo — and hoping that seeing her in action helps get that long-awaited Black Widow movie finally on its way.

But it's hard to say just yet what else she'll be up to in Civil War. The trailer also shows Black Widow running alongside Iron Man against Captain America. Here's what I'm thinking: Black Widow has it out with Iron Men, but they settle their differences and unite to stop Captain America in a great show of teamwork as he goes rogue on everyone. Once Black Widow helps Iron Man put a kink in Cap's plans, she goes rogue on her own terms and takes off on her own, setting up her storyline for a future film.

Because let's be real — why would Black Widow need to pick either Iron Man or Captain America's side when she can be her hero, leading her own film? Here's hoping she soon gets the chance to do just that.